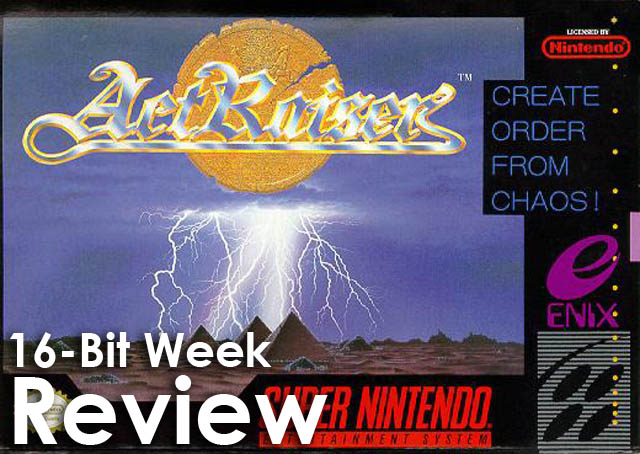 Religion in games is a touchy subject.  It’s often relegated to minimal reference in the Dragon Quest series, providing a location to save a game or remove a curse.  It’s used as more of a service than being anything integral to the story, hoping to minimize backlash.  Christian gaming is open in its religious intent, with The Bible Game — and others like it — representing the devout.

Up until recently the genre was full of minigame collections, bad action-adventures, or trivia gaming.

Enix’s ActRaiser bucked that trend.  Not only was it completely open (and often pushy) about its religious premise, but it was also a fantastic action RPG with high production values and endearing gameplay. It was the first action RPG that mattered since Zelda, and it was certainly the most idealistic.

The 16-bit era was known for its two distinct game design paths: reliance on technical upgrades, and maturation of plot development.  ActRaiser benefited from both of these. 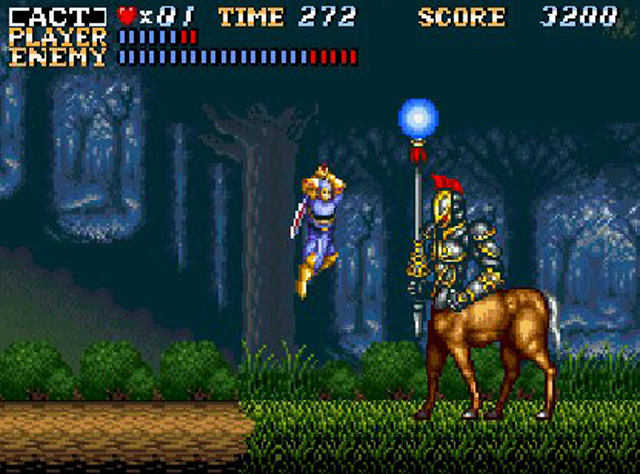 As early gamers moved from prepubescence into high school, the themes of the games they played matured as well.  The familiar “guys blowing up crap” wasn’t enough, as Japanese RPGs began to take a strong hold on Western gamer mentality and even the simplest of action games needed some back story to be tolerable. In ActRaiser the open allegory to God vs Satan is evident, though due to Nintendo’s strict rules of (anti?)tolerance the names had to be changed in the West to “The Master” (God) and “The Evil One” (Satan).  But the theme was still there.

The Master, having suffered a loss at the hands of The Evil One and his six generals, fell into a deep slumber to recover.  Awakened several years later by an angel, The Master finds his world devoid of faith and his power week.  The Evil One reigns supreme over the land, and in order to defeat him The Master must rebuild the faith of the citizens and take on each of the six generals one by one.

The side-scrolling action sees The Master taking a human form to battle against centaur knights, demons, and trolls in beautifully-rendered environments.  Giant characters, lush colors, stunning lighting effects, parallax scrolling… it’s all there.  Enix sneakily pits Christianity on a crusade against all other beliefs, as battles are waged against Hindi, Mayan, Greek, and Roman gods and monsters along the way on a quest to be the one true belief.  Was it an underlying tone that Enix wanted to convey? I was too young to notice in 1991 when the game was released, but it’s become ever more apparent today. 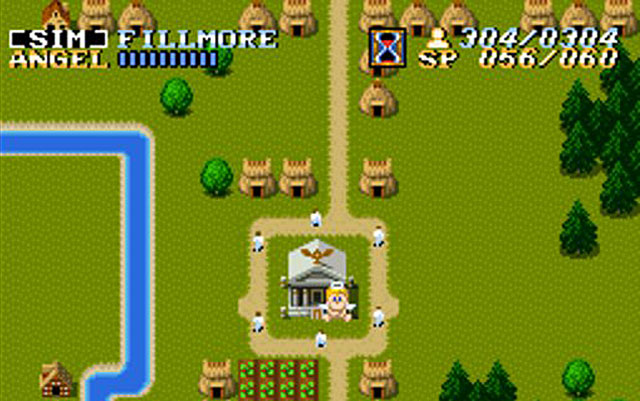 The religious undertones become booming overtures when the sim portions of the game take place. Armed with just a temple and a naked cherub, The Master must restore the faith of people by building homes and performing miracles on a desolate land.  Much like SimCity, the game allows for the evolution of buildings and farms to host more and more citizens.  My ActRaiser OCD forced me to fill up each village with the maximum amount of citizens, which translated to bonuses in the action portion. Once certain conditions are met and the “boss” of the region returns, the citizens become afraid and lose faith.  It’s up to The Master to restore it by vanquishing the false idol, and moving on to a new region/town in the process.

The Super NES’s famous audio chip contributes further by creating memorable symphonic music that tops anything Castlevania had made until then… and possibly since then.  The sounds of horns in the title screen indicate that a grand adventure was about to unfold (I was half-expecting to see the title screen of Ben Hur appear), and the orchestras of Fillmore’s and Northwall’s action sequences seem to point to the hectic nature of the plot.  That is all yin to the city-building’s yang, which is much more melodic and peaceful. The complete orchestral arrangement of ActRaiser is something that games fail to master even today.

I was 12 or 13 years old when I first played ActRaiser.  At that time, it was just a great Good vs Evil action game with some sim elements thrown in to break up the battles.  Playing it again, today, there is much deeper meaning.  The loss and rebirth of faith echoes like a mountain avalanche throughout the game, mirrored by the action and simulation sequences.  Everything in ActRaiser is black or white, right or wrong.  If only all religious belief was as simple and manageable as the game represents it.  Thankfully, ActRaiser does an honorable job of putting us a little closer to that ideal.

ActRaiser is available for the Wii Virtual Console.  This review was based on a copy of the game purchased by the Editor and played on a Super Nintendo.