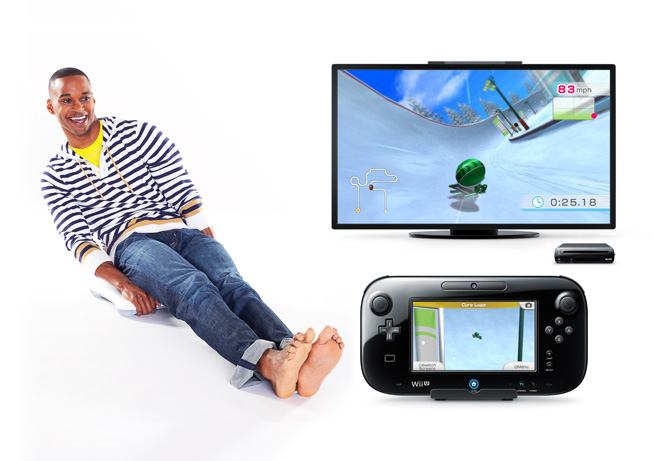 The majority of fitness software has been the same since Wii Fit launched in 2007. Sure they’ve focused on different types of workouts or ways to deliver the information to you, but the lines between the different games are extremely blurry and the quality and enjoyment is dipping as the years go on.

So why would Nintendo launch a console with another version of Wii Fit?

I tried Wii Fit U at E3 this year, and now I understand: in the 15 minutes that I played the game, my abs got RIPPED. Except, I didn’t know they did until about 5 minutes afterwards, when I felt sharp tightness in my stomach muscles and beads of sweat were starting to coagulate on my forehead.

With Wii Fit U, Nintendo doesn’t outright tell us that we’re doing challenging workouts. No no no. Instead, the company opts to hide that note in a series of fun and addicting mini games that are easy to master and come back to. At the same time, we’re actually performing challenging physical activities to burn those calories, unbeknownst to us. It’s clandestine tactics like these that authors of self help tapes would be proud of.

The demo station had five of the mini workouts available to try. The first that I hopped into, and the one that wore me out the most, was the one-man ice luge. In this workout, I was asked to lie down on top of the Wii Balance Board (remember that thing that’s under your couch?) and lean left or right to navigate along the race track. By keeping my legs and arms lifted off of the ground as I tilted, I was putting a great amount of pressure on my abdomen muscles.

Another event asked me to pretend that I was jumping on a trampoline, aiming to land in the middle each time. In reality I was performing calf raises, standing on the edge of the balance board as I looked down at the Gamepad lying on the ground on front of me, its screen depicting the center of the target.

A rowing event sat me on the balance board and asked me to race against a clock, again lifting my legs as my arms did a seated gym row. One minigame even had me pretending that the Gamepad was a dessert tray, and asked me to hold it as such. I was required to balance the food on the tray, working both my arms and legs, and tuning my balance.

Like most Americans I hate lunges for how they murder my thighs afterwards, leaving me unable to walk straight for a couple of days. Nintendo was sneaky enough to base a water cannon minigame around lunges. By looking into the Gamepad’s screen I could see the human targets running around and throwing mud at me. Aiming was done by rotating and tilting the Gamepad around, and when I stepped a foot forward onto the balance board and stomped down, I realized that I was actually very nearly mimicking a lunge. A few times later launching water at mud-people and I had done a substantial amount of the exercise.

The package still maintains some series exercise methods — not everything is hidden in a minigame — but its overall presentation is much more inviting and friendly, incorporating our Miis and often light-hearted situations. The game will even save leaderboards and group weight loss statistics for comparing, allowing us to bad mouth each other when we actually gain .4 pounds one week.

Wii Fit U isn’t the best hardcore exercise experience at home, and it’s not aiming to turn us into Adonises. But where it does succeed, and what the original mastered so well, was that feeling that what we were doing was still game-like and fun even though we managed to check the box with a smaller exercise routine. It’s part cute and part effective, and stands as a good time with the console, especially with one or two other people playing.

But that name — Wii Fit U. Uggh. The dick jokes are going to come in bushels.