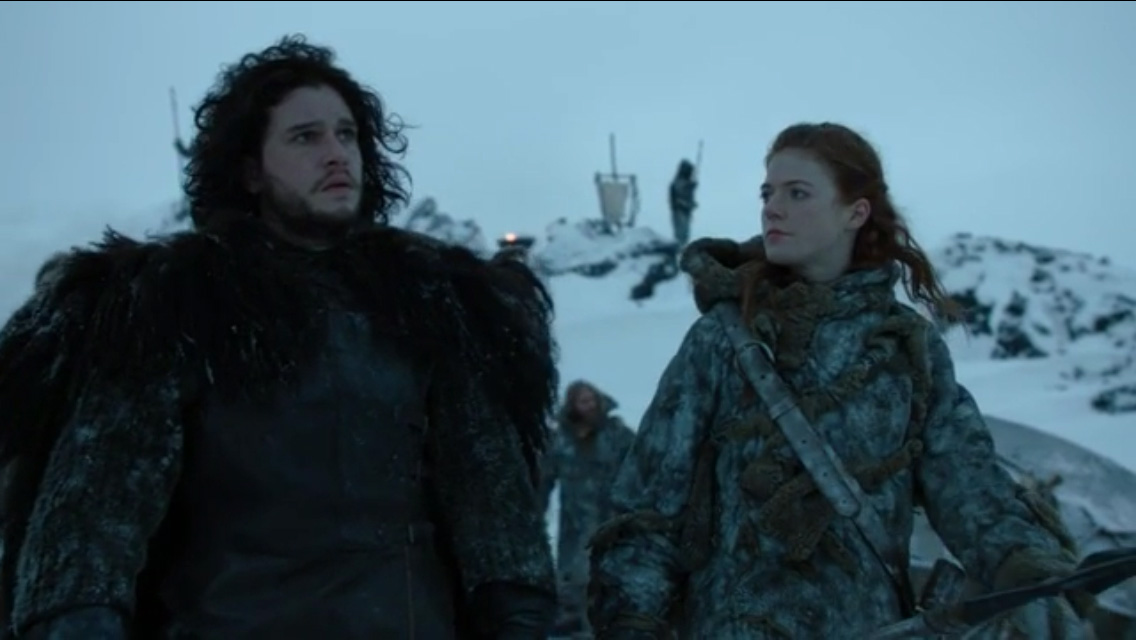 [Spoiler Warning: There will be many.]

Over the last two years HBO’s Game of Thrones brought us shapeshifters and dragons, witches and warlocks, shadow demons and zombies. And now it brings us giants. Where many shows, like The Walking Dead, have trouble with just one supernatural element, GoT seems to be able to weave them in and out as it pleases. It remains coherent and tight, and seemingly asks us to dare and try and let it convoluted and off course. And so in this very first episode of Season Three we get introduced to a giant almost instantly, passingly, and we aren’t phased.

Even though he’s fucking huge.

Granted, George RR Martin’s Song of Ice and Fire books are excellent material to work from. One of the major points of contention with series fans during Season Two was that the HBO program seemed to stray too much from the books in key areas. Thankfully the Season 3 premiere episode, Valar Dohaeris, was able to reset a few of the sticky plot points to be in line with the novels without alienating fans of the show.

The novel A Storm of Swords, third in the series, will comprise both Seasons 3 and 4 of Game of Thrones, being split in half because of its massive scale. Readers of the novels already have a feeling as to what major plot event will be at the tail of this season; the build up will be fun to watch (don’t worry, we won’t spoil it here). What we can say is that this episode did extremely well in setting the wheels turning towards the events of the latter half of this season and next. There are a lot of cogs in the wheel this year, and a lot of new characters with important parts.

Where last season brought the characters together in the Battle of the Blackwater, this year we see them moving apart. The uncertainty grows, the fear grows, and the tension is increasing like mercury in a thermometer on a hot day. Except that dark, cold days are ahead.

The kings of the realm are becoming more distraught and desperate as smaller factions begin their rise. Stannis has lost and must now regroup. Davos, miraculously surviving the battle, still faithlessly supports the Baratheon king. He’s not as blind to the ways of Melisandre and her control over the throne, and plots to murder her. Stannis won’t be so easy to convince, revealing where his trust (or fearful hope?) lies when he has Davos thrown into a cell after the failed attempt.

Davos has lost everything: his family, his fleet, his king’s trust. His honor remains though, and now his story moves from that of blind faith to one of redemption. He’s been defeated physically, but his mental resolve is perhaps stronger than ever. He’s quickly become one of my favorite characters, no thanks in small part to the excellent acting by Liam Cunningham.

Back in King’s Landing, Joffrey has survived the battle but is perhaps losing a more important war. We see his queen-to-be Margaery Tyrell already wooing the masses, stopping by an orphanage in Fleabottom to comfort the children of soldiers who died during the fighting. Joffrey is visibly dumbfounded as to why she does this, even showing a bit of fear when peering through the cracks of his carriage. It’s no coincidence that the camera shots used make it appear as if he is both secretive and confined. His resolve is broken after the previous events, and he’s slowly reverting to being a worried little boy. I love it. I love seeing him sweat.

As we saw last season, Margaery’s only goal is to become “The Queen”. Her level of plotting and planning is savvy but not yet enough to draw the eyes of Cersei. She’s pushing the right buttons within the city, gaining support, and working her charm to pull apart the Lannister family piece by piece on her way to the top.

She exemplifies the power that women have in the series: they’re methodical and powerful, understand their capabilities and how to abuse them, and remain the ones who sit at the top of the food chain in the world.

The fall of the Lannisters is becoming a major plot element. With Tywinn back in charge — no doubt helped by the Tyrell family and their army coming to the rescue — Tyrion’s life begins to fall apart. His position is gone and he’s been evicted from his plush bedroom and placed in one that resembles a cell. He demands respect for what he accomplished in protecting the city, but Tywinn makes quick work of that and plays the “Lannisters Are Above That” card. Even his sellsword protector Bronn seems to be shifting away. He’s in limbo, and is determined to crawl back to the top. Cersei is terrified as well. Worried about what may happen if her father discovers the truth of her children, she corners Tyrion in an attempt to keep him quiet. I’m worried that this season may leave Tyrion’s character development on the backburner as he’s forced to wait, wait, wait for things to happen.

The Stark family is no stranger to downfall either, and this first episode we see Robb’s kinghood begin to face some tough cracks. A portion of his army taken prisoner has been slaughtered. Sansa is still trapped at King’s Landing. Arya, Bran and Ricken are missing — we don’t see them in this episode. His only chess piece, Jamie Lannister, has been set free by his mother and his bannermen are beginning to question his authority and intentions. The tension that surrounds him is beginning to show in his demeanor. He’s becoming less confident.

North of the Wall, Jon Snow is facing uncertainty as well. He’s made his way into the heart of the wildlings and now stands before Mance Rayder, their leader. The scene plays out perfectly. Jon, still wearing his Night’s Watch cloak, sticks out like a sore thumb among the free men and women dressed in white and gray. “You know nothing, Jon Snow” still holds true, as he kneels before the wildlings as if in the presence of royalty. When Rayder questions why Jon defected, Snow must choose his words carefully. He’s there to spy, after all.

“I fight for the side that fights for the living.”

YES. Well played, Snow. Jon’s story is going to become pivotal to the survival of not only the Night’s Watch but also all of Westeros. He’s beginning to understand that perhaps the wildlings aren’t the enemy. At least, nowhere near that of the impending army of dead knocking at the door.

Oh, and that giant. The oncoming zombie assault is uniting more than just the wildlings, as the other races north of the Wall are assembling together to move South away from the threat. The lumbering brute seems to be just as weary of Snow as the free men are, even giving him a bit of a grumble to let him know that his enormous eyes are watching. It’s an uneasy trust that is being developed.

Out east and across the ocean, Daenerys continues to be seen as an enemy everywhere she goes. She requires an army, visiting the slaver city of Asatpor to potentially purchase an army of The Unsullied, eunuch slaves that only live to fight. Not only do the slavers look to take advantage of her, but the warlocks continue to be trying to kill her. This time she’s saved not by one of her Dothraki but by none other than Barristan Selmy, one of the greatest knights in Westeros and recently deposed by Joffrey (at the end of Season 1) for his age. Selmy has specifically come to find Daenerys, committed to helping her rightfully regain the throne for the Targaryens.

And so the wheels continue to turn. Where the Lannisters, Starks and Baratheons begin their downfalls, the Targaryens and Tyrells are improving their fortunes. The impending darkness in the North is creeping down into the kingdoms.

The premiere was everything that fans could have wanted. It was excellent, and an eventful precursor setting the table for dark things to come. It felt like the beginning of the end of Westeros as we know it, away from the houses that have been recently in control. It’s a quiet chaos that seems to be brewing. Everyone feels it, viewer and character alike. Spun together, the threads of tension in the premiere were vague enough to be suspenseful and exciting. It’s a tapestry, for sure, but one that is enveloping all of us. And there’s still so much left to be revealed. My mouth is watering for what we’ll see next week: Arya, Bran, Jamie Lannister on their journeys.

And Winter is (still) coming.