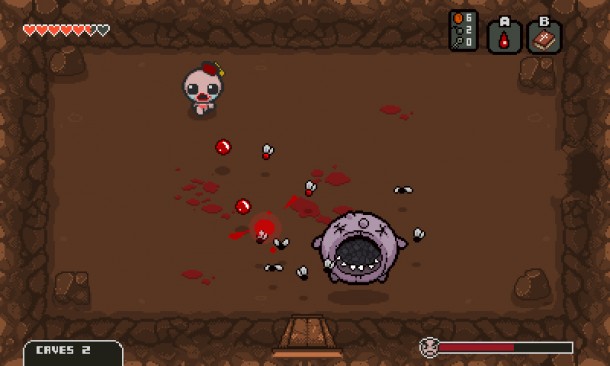 It’s been quite some time since we heard tell of The Binding of Isaac: Rebirth. The delay comes with good reason, I’m happy to report, as the remake of Edmund McMillen’s roguelike/shooter/Zelda clone will be released next year on PlayStation 4 and PlayStation Vita. What’s more, there’s finally a trailer showing off the “semi 16-bit SNES style” graphical goodness.

Well, it’s certainly a trailer, anyway. A rather creepy one at that, as befits a game about a terrified boy fighting Bible-inspired grotesques with his own tears. The complete lack of any actual gameplay up to this point is something of a bother, really, but such is the video game industry.

Radio silence regarding the remake hasn’t stopped the original from selling like gangbusters, and proving popular enough to get its own racing league. Its nature as a Flash game, however, necessitated some limitations – limitations the former Super Meat Boy developer would like to remedy with The Binding of Isaac: Rebirth.

In his much-delayed press release, McMillen detailed some of this remastered edition’s enhancements.

■ COMPETITIVE LOAD OUTS: Players can do the same run for Twitch streams etc

■ 50-percent FRESH NEW CONTENT OVER THE ORIGINAL BINDING OF ISAAC

■ STEAM LOYALTY DISCOUNT FOR PLAYERS WHO ALREADY OWN THE GAME

Personally, I fall in squarely with those who can’t stand The Binding of Isaac’s four-way directional shooting. That’s a shame, because I’ve rarely seen a fan-base so rabidly, continuously in love with an indie game. A second life on Vita means I might give the blasphemous romp a second chance.