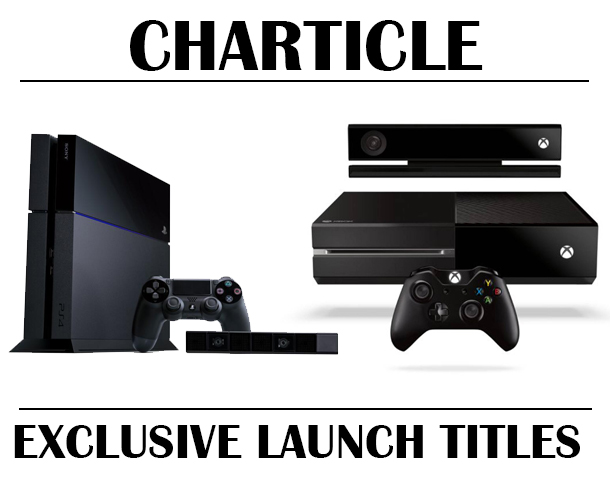 [Update: Our collective thoughts seem to have delayed yet another next gen launch game, as Sony’s Drive Club has been pushed back into 2014. We’ll update the charts as soon as we stop reeling.]

I enjoy numbers. Numbers deal in facts, and can help us make informed decisions when they’re laid out in detail in front of us. Our last Charticle dealt with hardware numbers looking at the next generation of consoles, and showed a fairly interesting playing field with wide differences. The prices, the processors, and the accessories are all different (and impressive) and certainly people might buy the consoles for the long haul. But as we learned this past generation, sometimes hardware isn’t the most important — software is.

And it starts at launch. Exclusive games will, initially at least, separate the next generation of consoles and sway purchases one way or another. There are a ton of similarities in launch titles this time around, something we didn’t see in 2006 when the Wii and PS3 landed. And not just between the two consoles, but with the generation prior. The overlap is fairly incredible this time.

We started by compiling a list of the 38 launch titles of the next gen, comparing the games of the Playstation 4 and the Xbox One. We marked which consoles are getting what games, and which of those games are coming to (or are already available) on other consoles like Wii U, Xbox 360, PS3 or PC.

Then we found a few interesting things.

As vaunted as the next generation is, there really aren’t a ton of exclusives for either side. Granted, the dreaded “launch window” could bring a lot of games, but there will be millions of gamers who won’t wait until Spring to pick up a device. A first impression is greatly important.

First, we grouped together the titles that will be available on all (or many of) the consoles. There is a good chance that the largest sales of these games will still appear on current gen, given the install base. The number of games that appear on more than just the PS4 and Xbox one (together) is 21. This includes Assassin’s Creed IV, Call of Duty: Ghosts, NBA 2K14, and the much-hyped Zumba Fitness: World Party.

Yes, there will be features within these games that are inherent to the Next Gen, but they won’t necessarily change the game all that much. Many of the next gen versions of these multi-console games are launching a month to a year after the originals. In many cases, retailers and publishers are working together to allow current generation owners to upgrade their versions to the Next Gen for $10. Saved games may not come with that, though, so be ready.

That left us with 17 games. Four of those games are Playstation 4 and PC, meaning that you don’t need a new console to enjoy them if you already have a STEAM account. Those games are Blacklight Retribution, Warframe, War Thunder, and Switch Galaxy Ultra, which is coming to Vita at the same time and negating its exclusivity.

The only games left on the list are 13 games that will actually appear exclusively on Next Gen consoles. One of those, NBA Live 14, comes to both, and so it’s not exclusive to one console or the other.

That leaves 12 actual Next Gen exclusives. Twelve games that you possible can’t get on another console, and the whole reason that you’re choosing one console over the other for exclusive gaming. And here they are.

Which of these exclusives drive you to the console of your choice? Do any of them scream “this is the reason to own Next Gen right away”?

*Feel free to correct us if you come across any errors. These are launch day, not launch window. These are also the “confirmed” titles for launch day. There are indies coming as well, but we haven’t received much info on actual launch dates.

[Side Note: Kyle and our good buds at Ars have a great breakdown as well (from August), with graphs too! Clicky clicky here]

[Like what you see? Consider supporting SideQuesting by checking out the Xbox One and Playstation 4 on Amazon. Or, sign up for CentUp and drop us a donation!]