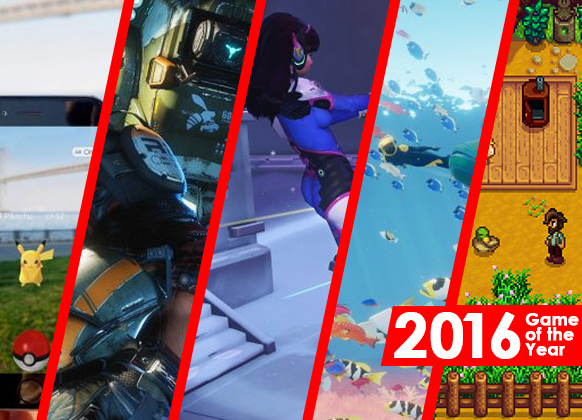 2016 was a strange year, rife with difficult transitions and conflicts on both a personal and national scale. It’s fitting, then, that my favorite games of the year are also strange. Carefully rationing gaming time almost counter-intuitively resulted in me trying new things, branching out into genres and environments where I previously dared not tread.  As a result of my adventuresome choices, I found that many of these titles (be they mobile game or multiplayer FPS) have added meaningful flourishes to their predecessor’s formula. A unifying theme of my picks is this idea of transition–of taking beloved intellectual properties or genre touchstones and improving on them. 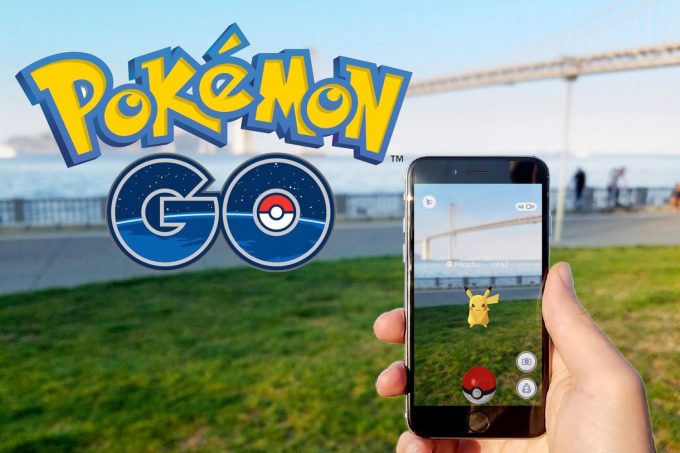 This may seem like a strange pick at first blush, especially considering the mobile app’s rocky premiere. A wealth of special events and continuous updates have greatly improved on the bare-bones launch version, making Pokémon GO grow from a temporary pop-culture sensation into something with a long term, dedicated playerbase.  Battling and trading—both highly demanded features and touchstones of the Pokémon name—are still absent from the title, but Niantic promises that these features are somewhere on a glittering and distant horizon.

Despite the complaints and tumultuous launch, there was a time during the summer when young and old alike wandered around urban and suburban landscapes in herds, roaming sidewalks with phones held out like beachcombers wielding metal detectors. During this age, merely shouting “Vaporeon” or “Chansey” was enough to inspire a stampede.

The zeal has since died down. While the acute accent in Pokémon may now be better applied to passé (at least according to the “cool” kids), it’s hard not to acknowledge the sheer cultural impact of this title. I, for one, continue to play Pokémon GO religiously. It has become a father-daughter bonding experience and an excuse to walk around new downtown scenes with friends.  I will always treasure the time that it was a broader unifying influence, inspiring knowing smiles and excited conversation between complete strangers. 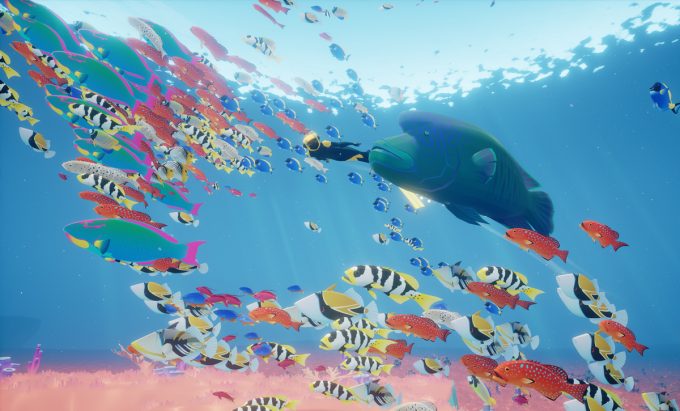 The best description possible for ABZÛ that I can offer goes something like this: imagine Journey, but underwater. It’d be irresponsible not to make that comparison, especially considering that ABZÛ was composed by Journey’s art direction.

That said, ABZÛ earned its place on this list for where it deviates from Journey’s formula. Instead of interacting with a stranger via Journey’s clever multi-player, ABZÛ transitions the focus of gameplay interaction from people to nature. Rendering an impressive amount of fish at any given time, ABZÛ presents a wonderland of brightly-hued fauna to swim explore. Frolicking with some of the ocean’s largest gentle giants makes for some extremely memorable moments, and, as a nature-nerd, I was thrilled with the variety of aquatic ecosystems represented.

There’s not much replayability to ABZÛ. The game tries to encourage at least one more playthrough via collectibles, secrets, and meditation points (where the player-character can sit and contemplate the stunning environments), but nothing beats the emotional rollercoaster of the first playthrough. It’s a worthy experience, even if it’s only a couple hours long. 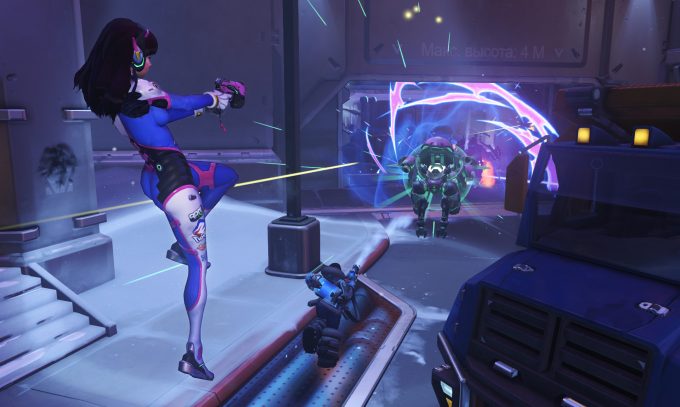 I’m not usually a fan of the multiplayer FPS genre, which makes its surprising that not one but two games from the genre snuck their way onto my list. Unlike Titanfall 2, Blizzard’s Overwatch is nothing but team-based, multiplayer action. Sure, there’s a rich universe for players to sink their teeth into via the animated shorts and clever environmental design, but the story is far more implicit than explicit in presentation.

What really shines in Overwatch is Blizzard’s unique take on team-based shooters. Character diversity ensures that no two matches are the same and accommodates for an insane amount of playstyles and scenarios. As a multi-player FPS, it’s also strangely light-hearted, colorful, and optimistic. The match summary screens prioritize player’s accomplishments over their failures, further lending to the game’s cheery tone.

These features combined make a fun game for seasoned players and FPS-adverse gamers alike. Though I don’t see myself playing Overwatch competitively, the times that I’ve played it with friends have been rewarding and insanely fun. 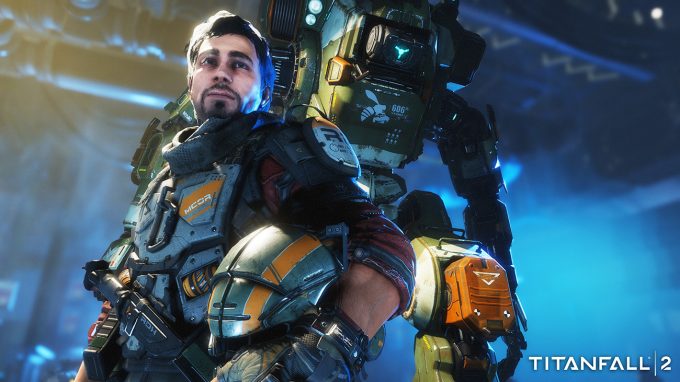 The first Titanfall was a remarkably solid FPS that suffered from a lack of content. Titanfall 2, the sequel from Respawn Entertainment, makes up for its predecessor’s shortcomings with one of my absolute favorite FPS campaigns. The fast and tight controls pair nicely with the single-player’s exciting set-pieces, and some of the boss fights presented just enough of a challenge to leave me whooping with glee with each victory.

There’s nothing utterly unique about Titanfall 2, which isn’t necessarily a bad thing. It takes common FPS tropes (as evident within its central conflict between big-bad corporation IMC and the good-guy Militia) and presents them with polish and flair. BT-7273, the Titan Protagonist, is easily the best part of the story. Choosing the most facetious dialogue options results in some genuinely funny responses. It’s difficult not to become emotionally invested in BT’s well-being, and his numerous loadouts lend diversity to the mech-based combat.

The multi-player also remains a big draw and capitalizes on Titanfall 2’s polished and fast-paced gameplay, but it remains to be seen how well Respawn will dole out new content to keep it fresh. 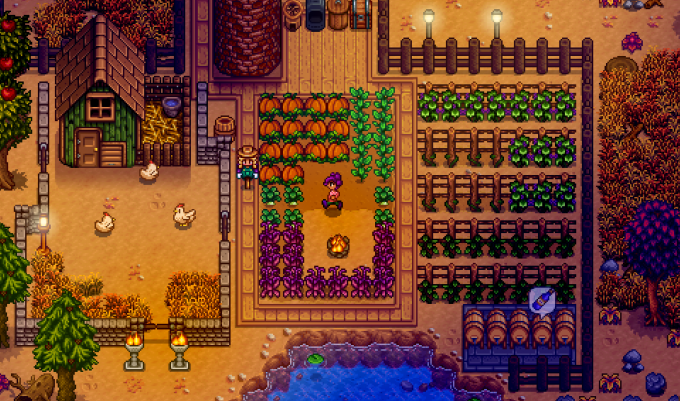 There’s a good reason why the gaming community fell in love with Stardew Valley in early 2016. As a spiritual successor to Harvest Moon, this title is as addicting as it is relaxing, providing a saccharine digital escape from the workaday world.  Stardew Valley chronicles the main-character’s transition from cubicle worker to beloved local farmer and community worker, and, in doing so, it extols with optimistic fervor the benefits of hard, slow work and the support offered by small communities. Nothing passes quickly in Stardew Valley—work, days, and seasons all progress with the leisurely rhythm of routine.

There’s something for everyone, here. Players can easily while away the hours exclusively tending to crops, but crafting artisan products, mining in dungeons, and socializing with the townsfolk also provide enchanting gameplay. The valley is host to many secrets that ensure that each in-game year provides a unique experience and challenges.

Just like how certain songs or scents might inspire nostalgia for bygone times, I will forever associate this quaint little game with 2016. Stardew Valley has earned its place on this list not only for its technical successes but also its endearingly bright outlook.