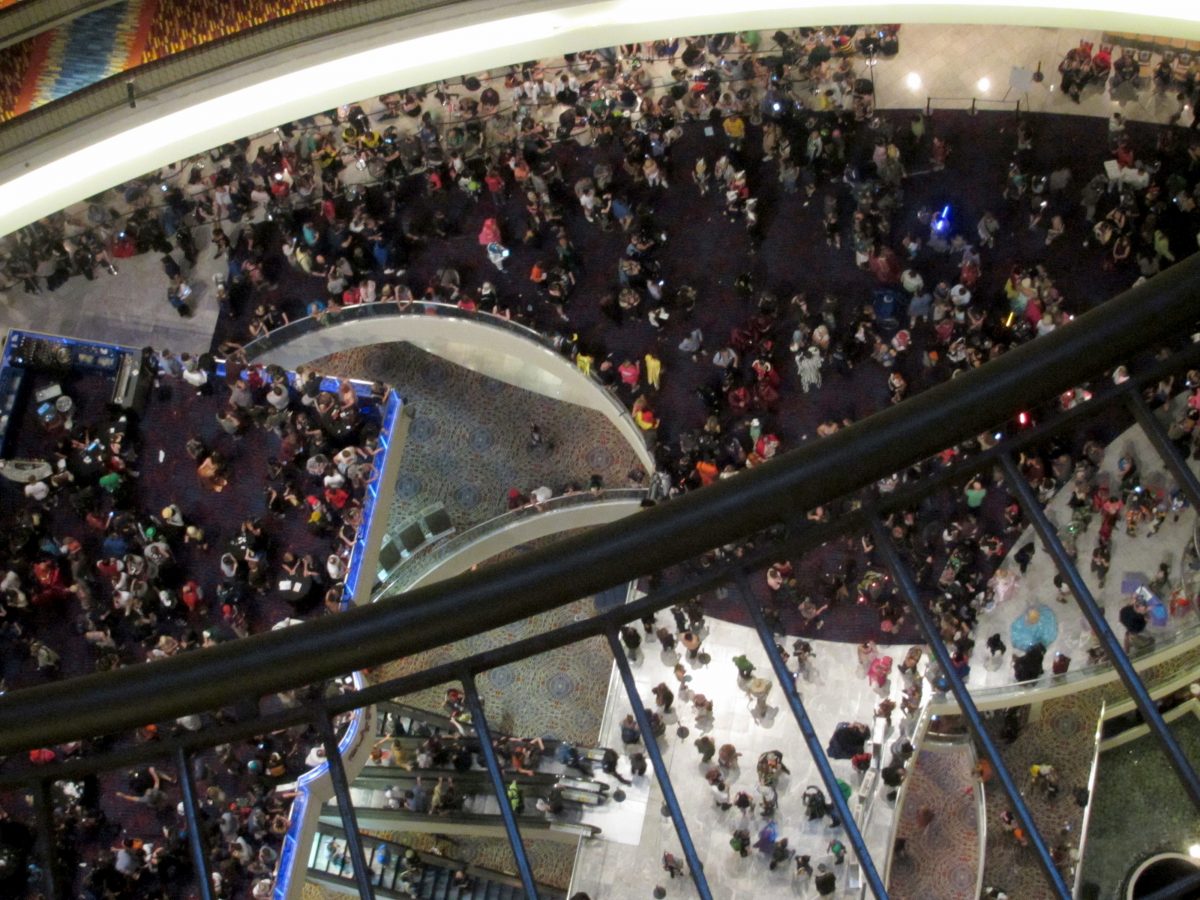 Why events like Dragon Con are holding contemporary geek culture together where E3 falls short, and how that is changing the industry.

It’s around 11 p.m. on a Saturday in Atlanta, Georgia. I am standing in a sea of people, all of whom are staring, in a sort of trance, at a strange amalgamation of pirate and goth singing sea-shantyish songs. Tongue-and-cheek lyrics that border on macabre and irreverence fill our ears, and we rise and fall with the sway of words despite the gruesome undertones—a stark contrast to the last hour, where we listened to the Atlanta Phil Harmonic Orchestra play music from film and television favorites. And the hour before that, when we perused an entire floor of artwork that ranged from Greek and Norse Mythology to dragons and faeries and cats. Or before that, when we joined 600 other people and listened to the musings of Jim Butcher.

This is Dragon Con—an annual convention that has taken place in Atlanta since 1987. While initially the con drew in a crowd of about 2,000 people, nearly three decades later over 80,000 people attended (2017); and these numbers show no sign of decreasing in the years to come.

Although this was my first time attending Dragon Con, I can see why it continues to flourish. To be frank, I did not know what to expect; I went in blind, ignorant to many of the famous names, faces, and beautifully crafted cosplays. I thought my unfamiliarity would make me feel a bit out of place. I was used to gaming conventions that I could approach with an erudite confidence. PAX. E3. GDC. I knew names, parties, and how to navigate the crowds. I knew my purpose: try games, review them, interview people. But Dragon Con is, overwhelmingly, everything: anime, science fiction, gaming, fantasy, television, film. And while I hold an appreciation for all of these mediums, I am by no means an expert in this prodigality.

It is the overwhelming nature of Dragon Con, however, that prevents one from feeling out of place; there is, quite literally, a place for everyone. My lack of knowledge felt like a perk. It was welcomed by the community. Any curiosity about content was always met with a fervent response—a passion and zeal that became contagious. I was not excluded because of my lack of involvement in a community—I was welcome. And that openness perpetuated a mutual interest: I wanted to see everything that everyone else was excited about. Singing pirate? Sure, I’ll go! A fantasy writer whom I’ve never read before is giving a panel? Why not. High-fiving strangers and chasing a Clap Trap cosplay? Duh.

This experience defines the event: a fulfillment of discovery. A confluence of people who have similar passions and want to share them. It is a fervent desire to delve into the parts of ourselves we do not often get to, or that we may sometimes forget in the daily grind of life. It is fandom. By the fans, about the fans, for the fans. And despite this being my first time, I felt at home the moment my eyes caught a glimpse of marching stormtroopers during the parade. These were my people. This is what being a fan is about. Loving and sharing and embracing. Teaching and discussing and learning. Fodder for passions. Fuel for communities to grow and avoid toxicity.

Regrettably, I was only able to attend for one day—but a single day was enough to see a difference in conventions and reflect on the overall purpose of cons. Dragon Con seemed to be getting something right that other conventions lacked. It is not an expo for trade, like E3. It’s not exactly a gaming festival, like PAX (though, perhaps fan-wise, PAX is the most similar). It is not for announcements or marketing, like Comic Con. Its entire design and eco-system are based around fulfilling the curiosity and love that fans have towards science fiction, fantasy, and gaming

This curiosity can be satiated in a plethora of ways. From art galleries and concerts, to fan events and

panels with authors, artists, spokespeople, and celebrities. The panels, particularly, are unique because they are often run by fans—whether in the style of fan Q&A or simple insightful commentary by fan sites or groups. Each panel is set into sections or “tracks” dedicated to particular trades or communities (e.g., science fiction writing or anime), making it easy for fans to follow what they want to be involved with. I attended a panel with writer Jim Butcher, whom I did not know prior to the convention. Despite my lack of knowledge, I still learned much about writing and world creation. His openness and ability to tell narrative was enthralling. In retrospect, I found Butcher effective because of his vehement attitude towards his subject matter; he, too, was a fan. Of world creation and character development. Of fantasy and exploration. He was not there to pitch his books. He was there to have a discussion.

E3, on the other hand, has not been growing. While it is still a heavy name in the gaming industry, its industry-exclusive attendance numbers have fluctuated over the years. E3, initially, was for the fans—despite being a trade convention. It opened its doors; if you had words and could travel you could go. But, in 2006, it shut its doors and became invite only.

Over time the process of invites became more open, but it was still exclusive to industry workers and press. As press or exhibitor, you did not explore something because you were curious or excited about it. You explored something because it would have numbers following it. It was mainstream. It would get you hits (unless you have the perks of being a freelancer).

E3 was not really meant for gamers—it was meant to sell products. When fans accepted that, the hype for games went to the internet, where fans could converse and watch briefings in their pajamas. Gone was the attention, or care, of the audience. The money bringers. Gaming companies began to question the relevance of E3—why spend thousands of dollars for a trade booth when they could simply target an audience directly online? Enter Activision and EA pulling out of the expo in 2016 (man, I missed Activision’s pizza) The fans, many realized, are what matter. It is not the talking heads or the CEOs that drive the direction of the industry, though they may like to think that. The fans create the trends. They are the ones who dedicate $60.00 (or $120.00 if you play Destiny) towards content. The ones who talk. In 2017, the ESA decided to make E3 open to the public—a last-minute effort to save its relevance. And it worked. Activision returned. Game designers and publishers held panels, opened playthroughs and show floors, and suddenly it was for the gamers again. Whether the ESA will continue, and perhaps prepare better for this trend, remains to be seen—but, overall, industry fans were excited for the transition and E3 called for almost 70,000 in attendance. 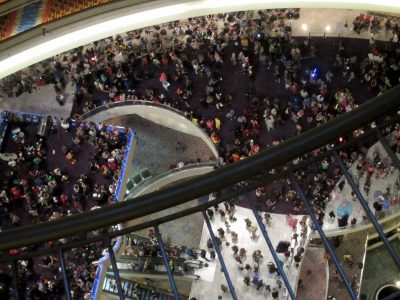 Dragon Con does not seem to have that back and forth battle in identity like E3 does. It knows what it is. The only marketing involves the selling of merchandise or artwork. There is no “news.” It is a chaotic, strange, and beautiful celebration of so many different things. A celebration that is able to bring together communities and strangers. Fans, after all, are the backbone. The foundation for why we have comics, or games, or science fiction. Therefore, conventions like Dragon Con do not have to change their ways to continue gain attendance and success. The nature of its chameleon charm molds to the industries it is involved with—industries that are becoming more and more mainstream and accepted in mass culture. Gaming, especially, is rapidly evolving; the cons and expos that go with it need to keep that in mind and bring it back to what matters most.