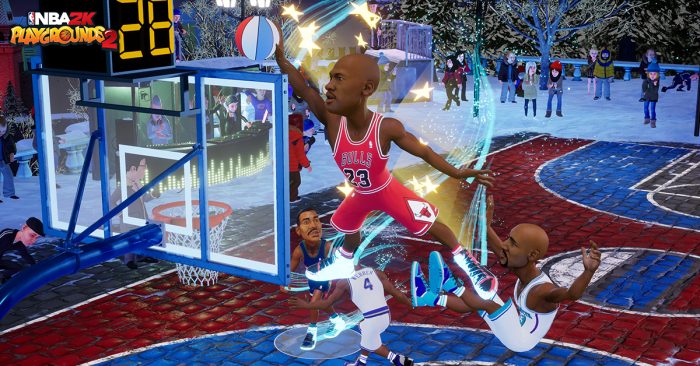 It’s clear that Saber Interactive is dedicated to NBA Playgrounds for the long term. Last year’s edition was a satisfactory experience, beset by a few design choices that made the game a little out of reach for casual fans. With their sophomore effort, the developer seems to have taken a much-needed step back and refocused its vision for the game. With just a few well-planned refinements, NBA 2K PlayGrounds 2 succeeds over the first game in every way, providing an enjoyable, looser and more accessible experience.

In short, it’s finally got the “arcade” added into its “arcade sports.”

The game is easy enough to understand, likely due to its familiar design. Two teams of two super deformed players face off on any selection of basketball courts, from the mundane to the wild, and incorporate basic movesets to rack up points. There are no quarters or halves, no substitutions or fouls, just scoring until the time limit is up. This design choice — removing all of the things that break up a typical simulation sports game — allows for an experience that flows much faster with action that never stops. Thanks to a visible shot meter, we can much more easily let go of the ball at the opportune time to nail an alley-oop or that deep three-pointer. That also means that accuracy isn’t as important either, since precision of that shot meter takes precedence. Gone are the days of stressing to set up a shot or get around a defense; just get a opening and shoot in the green highlight. It’ll go through most of the time.

When it doesn’t, though, it’s not difficult to stay in the game. There’s no rubber-banding in Playgrounds 2, at least not anything that automatically pulls a player back in. The looser play and overall easier shot scheme let us actually get back into a game fairly quickly if we can steal or block shots enough times. If anything, the game feels a little too easy, even when the CPU is jacked up to the most difficult levels. Because of all this, experience and skill aren’t really that important. It’s much friendlier to new players, who can excel just by timing shots correctly and aggressively trying to grab the ball. Whether playing online in tournaments or offline in a three-point shootout, the game retains an effortlessness about it.

One thing we’ve noticed about playing on the Switch is that the game works much more smoothly on the big screen while docked, but much easier when removed. While in this handheld mode, the game’s frame rate drops a bit, but instead of hampering the action it actually sort of helps it. I find that the shot meter skips enough frames to simplify its swing, making it easier to stop it in the optimal green shot zone. Oops!

Play on the court is only a part of the experience. The game has a whole series of unlocks that are meant to entice us to come back and build our perfect teams. My current squad consists of legendary stat-busting Lakers and Pistons, and a stray Bull or two, that look great on paper but really don’t do much more than modern position players. I won the championships in my first couple of seasons without any well-known players, and their play doesn’t change much after leveling them up through experience. That said, the goal isn’t to just win a title or a match, but to do so with a team of players that we love. The NBA 2K license allows Sabre to do just that, stocking the game with not only classic players but modern rosters as well. The character designs look great, too, really going all in on the California Raisins claymation appeal of the first game.

Players and gear (with which we can use to visually customize our teammates) can be opened just by playing the game and racking up points, but it takes a long, long time to do so. Even after two full seasons and several three-point and online contests, I only managed to unlock about 5% of the players. I can’t even play with a couple of teams because I don’t have enough players unlocked. Sorry, Minnesota. Well, there *is* one way to grab the extra stuff. The trade-off with hopping on the 2K bandwagon is that microtransactions are prevalent in the game, allowing players to skip ahead if they want. These don’t change the game (you’re never paying to win) so it never feels like an absolute necessity. I guess they’ll help cut time for those who *must* have the right team. I will say, though, that I’m not a fan of the “Influencers” that are added as playable characters. Instead of them, I would have loved more celebrity players or wacky mascots. Regular updates have kept the courts and players fresh, so there’s a dedicated reason to keep coming back.

Playgrounds 2 feels like it’s trapped somewhere between full arcade craziness and a traditional simulation NBA game. But, the fun is there, so it never has to fight against that design limbo. Saber has learned a lot from that first game. It’s light enough but not campy, baked in the love of pro ball. The year plus from the launch of the first Playgrounds has let the experience marinate and cook over time, developing into a fun sports game that carries some of the best of its influences on its sleeve.