Spoilers ahead! Susperia (2018) may not be a film driven by a feminist agenda, but it still works to push the medium forward in embracing the feminine identity.

We’re in 1977 divided Berlin and a young girl named Patricia manically enters her psychiatrist, Dr. Klemperer’s, office. She curls into the fetal position of his chair muttering of how she was groomed to be “perfect” by the heads of the famous Markos Tans Dance Company. She twitches squirrelishly and sees eyes on everything, tossing albums and books about to avoid their all-seeing gaze. She hears voices in her head. In an Arthur Miller manic episode she shouts “Witches!”, Dr. Klemperer writes down that her psychological state is diminishing, and then the camera shifts to a dying woman in rural America, accompanied hauntingly by Thom Yorke’s melancholic score. This is Susperia (2018)– not a remake of the 1977 Argento film, but something meant to hold its own. And while it’s a horror film first, it also supplies a healthy step in the right direction for women in film as well.

Overall, it’s been a relatively hopeful time for women in movies and television. With the reincarnation of DC’s Wonder Woman and the excitement trailing the upcoming release of Captain Marvel, it’s safe to say that women are getting more lead time in mainstream film. Strength and autonomy radiate from female protagonists who, in many ways, embody the quintessential feminist narrative. The Buffys and Lara Crofts. The Salts and Mrs. Smiths. The Jill Valentines and Fem Sheps. All powerful and independent. None objectified in their creation. It’s inspiring to think that young women can see these characters and realize that there is a relatable strength within them – characters that, before, reflected only a shallow sense of service to the plot. It’s even better to see men embracing them as protagonists as well. But Susperia is unique because, even though I’d argue it’s an empowering feminine narrative, it’s not really about a heroine—and that’s tremendously important to promote; being strong in the physical sense – being able to defend oneself and throw a car across a room – is still, at least initially, a man’s idea of strong.

Susperia, and other media like it, is important because while it involves a female-driven narrative, it does not buy into the masculine idea of strength. It delves into the nitty gritty of female and ultimately breaks from the standard formula to explore complexity of female identity. Not the girl next door or the friend with benefits or the Gwen Stacey serving as an alternate Peter Parker. Something much more raw and real—something some may consider taboo. Women are not these pure perfect beings. Motherhood. Pregnancy. Cycles. Perspective. We have dark thoughts. Dirty crevices and flaws. Nurturing instincts and grace. All these things we encounter and see. But all are still relatively unexplored in film. The movie itself has no shame in what it displays. It is riddled with disturbing imagery and gore. It is intriguing not because it holds up a strong feminist narrative in which moral values triumph, but because it’s simply a feminine narrative. One that explores the horror of witchcraft and the devotion of motherly love. One that rips open (sometimes literally) the fleshy details and influence women can have on both each other and on men.

For a narrative to be deemed feminist, it must follow a theme that elucidates gender inequalities. Susperia does not do that. The cast is by-and-large female the central conflict occurs within the coven of the dance studio. Most men in the film, except for two policemen the coven use as play-toys, are either out of focus or played by a woman (Tilda Swinton with a phenomenal performance as Dr. Klemperer). The dancing itself, while harsh and sporadic, is not some commentary of ending oppression caused by male dominance but one instead created an almost religious drive. If anything, that oppression would not stem from a man, but from Susie’s (Johnson’s) own abusive relationship with her mother who, when catching Susie masturbating in a closet, smashes her hand with an iron. 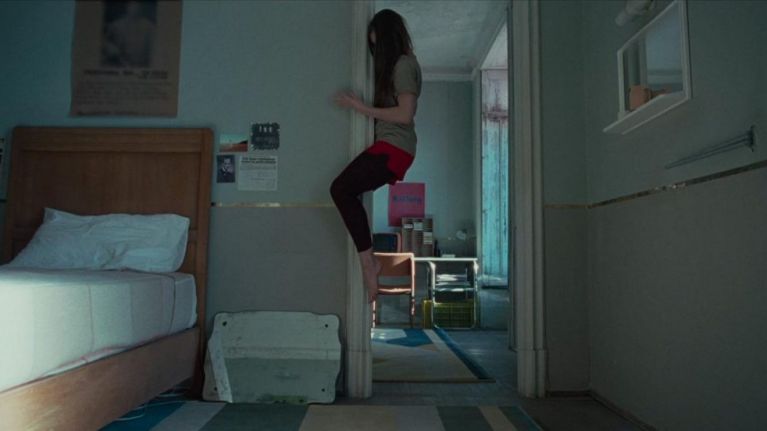 The central conflict of the film, in many ways, centers around the complexity of motherhood and the mother/daughter relationship. The coven of the Markos Dance Company itself was created by three mothers (Tears, Darkness, and Sighs). Mother Markos asks Susie to forget her mother and accept the “only mother she really needs,” so Markos may possess her body. Susie’s own mother states that Susie is her ultimate sin. There is something both beautiful and terrifying about motherhood. As Dr. Klemperer states, “Love and manipulation, they share houses very often. They are frequent bedfellows.” In motherhood, there is both love and manipulation. Mother’s can create identity. But they then must also bare responsibility and consequential blame to what they create or dwell in sadness when their creation leaves them. Susperia explores the complexity of motherhood from these perspectives. The love Madam Blanc (Swinton) has for Susie. The sin her actual mother believes that she is. And then even Susie, who grows into what she is meant to be despite the influence of the mothers that surround her, becomes the Mother of Sighs herself (Susperiorum). When Susie transcends her own identity, she does not become a heroine – but she is also not clearly evil.  She holds to grace in some strange way, even after brutally killing part of the coven. She ends the torment of her “children” (the girls of the dance studio) and even grants relief to Dr. Klemperer’s PTSD all while growing into something her own mother denied and feared. There is a strangeness in all these relationships. Is it evil, or are the witches simply driven by a power play of who becomes the next coven lead? It’s not black or white. Good or evil. After all, “it pre-dates the concepts of Satan and God”.

There is something rigid about the current idea of the female narrative. Something that does not want to remove the comforting purity of women or motherhood or the objectification of sexual desire. And that may be why Susperia is not a film for everyone. It’s a raw narrative that is difficult to digest. There are women who dance and undress. Who discuss the feeling of fucking. But none of it Is sexualized. None of it pure. And it’s that discomfort that gives it every reason to be seen. In order to grow comfortable with the things in which we are not, we must allow ourselves to be exposed to them. Just like men, women have their own unique perspective of things. We are emotional and flawed. We may not be able to physically overpower a man, but we have a different sort of strength and a different set of issues. We have stories to offer. It’s time we drop the act—the ideal image created both for us and by us—and delve into something that is real. There are so many stories that can be told.