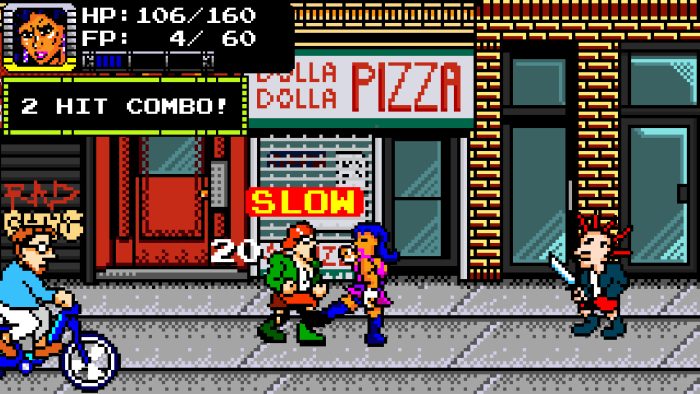 I didn’t live on the New York City streets in the 1980s, but I’ve played the video game about it.

Back in the NES days, brawlers were a dime a dozen. Double Dragon, River City Ransom and Bad Dudes fought for our time whenever we wanted to beat up street thugs. There was a definite formula to the genre: punch, kick, and jump. That’s pretty much it for action. The President or our girlfriend has been kidnapped. That’s essentially the gist of all of the stories.

Treachery in Beatdown City celebrates those tropes, but pulls them apart and reassembles them in rather unique and innovative — and enjoyable — ways. The developer, Shawn Alexander Allen, opts to ram together not only brawling, but also lite RPG elements, tactical battles, a Fallout-like VATS system and a complete narrative. There are macro themes of people vying for power and money (and a President who is kidnapped by ninja assassins while at a symposium warning presidents about being kidnapped by ninja assassins) and micro themes of shitty people and equally shitty interactions that often lead to fights.

The PAX East demo begins on a world map, and with an SNES styled game pad in hand we move point-to-point as we interact with NPCs or shops on the board. Eventually we bump into an enemy, which leads us into a conversation cut scene that sets up the fight. Each character in the game has a back story, Allen tells me, so that we’re not fighting mindless thugs. In fact, there aren’t the waves of enemy clones in this game, either, since we can fight the same enemy over and over again depending on the path that the narrative takes us. One of the punks we come across has the honor of being sort of the “Pidgey” of the game, complete with a nervous failing and the capability of being defeated over and over again. Other enemies are pure bikers who zoom across the screen on their cycles ready to be knocked off, or angry drug dealers, or just people who are in the wrong place at the wrong time. 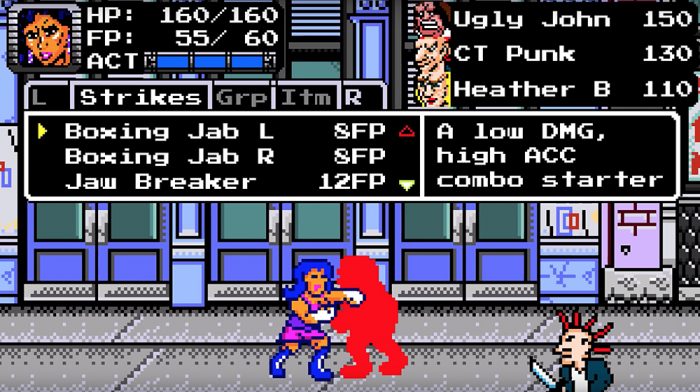 When the battle actually unfolds it looks like any other brawler screen, with enemies running around and items strewn about the board. But that’s where the similarities mostly end. Sure, we can do some distance attacks and jabs for some (extremely) light damage, but those are really only there to let us buy some time. Once we’re close enough to an enemy, the battle actually begins. The fights require us to select a series of attacks, up to three, that chip away at our FP (fighting points) to maximize the damage done. More powerful attacks take more FP, obviously, so managing if we want to go all out at once and drain our FP, or do some combination of weak and strong moveset, is key to the experience. FP is slowly recharged over time, hence keeping our distance, but can also be filled with items and buffs in a pinch. 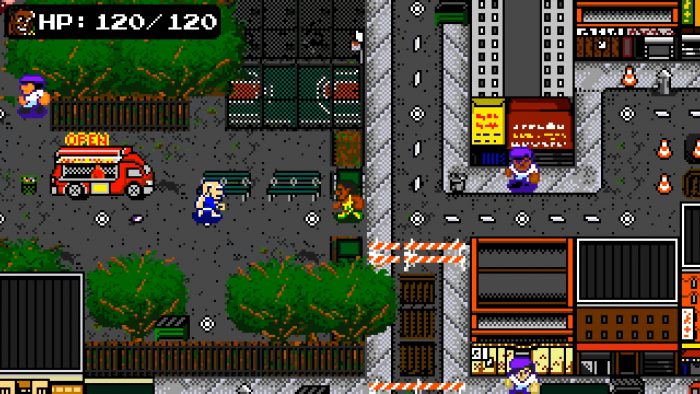 This makes battles much more tense and methodical than traditional 2D brawlers. My tactic? Try to run away to recharge my FP, but this leaves me vulnerable to back attacks that send us into a defensive mode in which we can try to block or counter. Taking down the demo’s boss is satisfying as hell, I need to admit. The strategy of going after him and pulling back, then going after him again is decent, but with so many of his minions on the screen we need to be resourceful with our FP and who we’re going after. Answer: the bikers. They have a tendency to knock us down just as we’re about to go after the boss, so taking them out first is key.

Treachery is a completely novel way of approaching the 2D brawler genre. It’s a brawler, but it’s also surprisingly not. Fighting game fanatics will find something to enjoy in the game, and even RPG nuts will feel like the sprinkling of turn-based options is fresh and challenging.

After nearly 5 years in the making, Treachery in Beatdown City arrives for Nintendo Switch and PC this year.