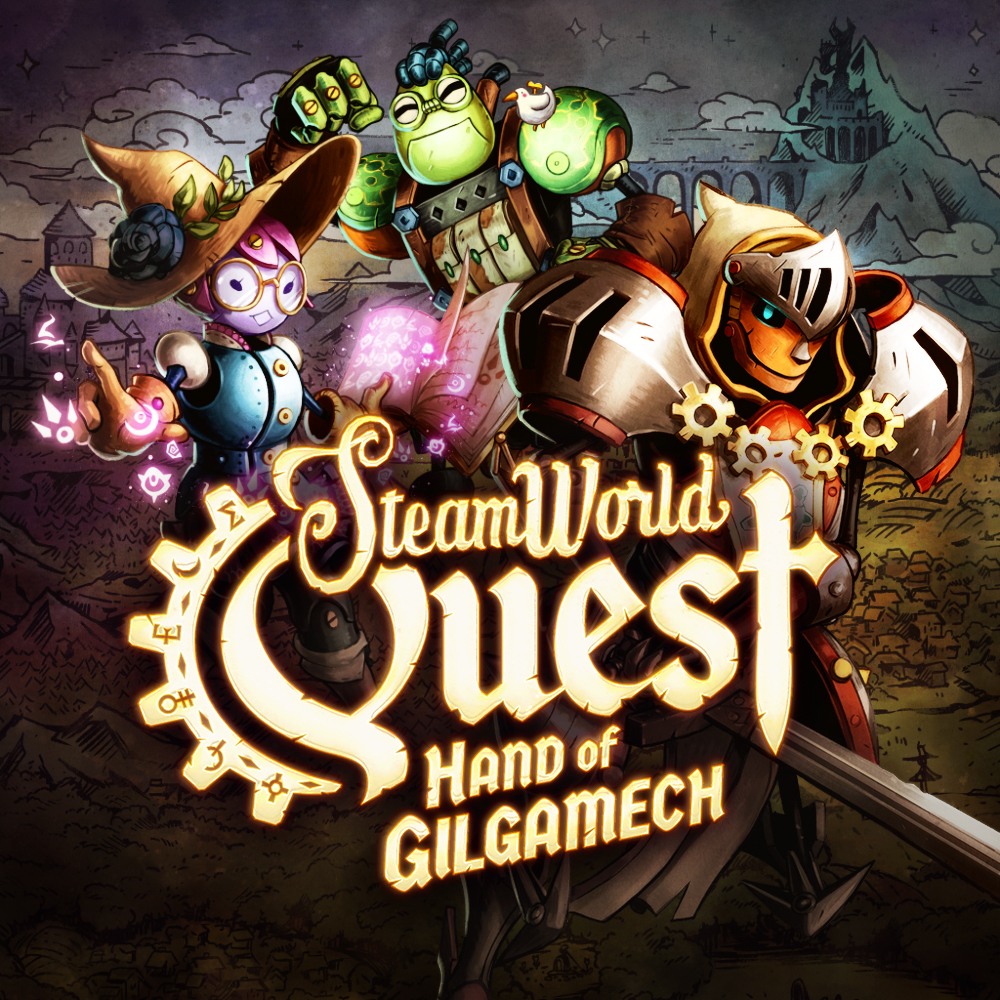 Seventy-five percent. That’s the notification on screen of the amount of secrets and completion I had mustered in one of the earlier maps of Image & Form’s SteamWorld Quest: Hand of Gilgamech. I thought I had found everything. I was sure I overturned every stone and destroyed every thicket in the way, bashed through walls and opened every chest. What was I missing? Aha, a path. Hopping back into the chapter, I found a little path off to the side towards the end of the stage that I initially overlooked. Just past that path was a chest and some treasure, so gobbling them up was sure to let me hit my completion goal.

Again I hop in, and again I traverse the entire landscape of this section, hitting everything and running into everything, attacking everything and talking to everything. Still nothing new. I make my way all the way back to the first screen and start again, until it hits me: I always went right, so why not try left? 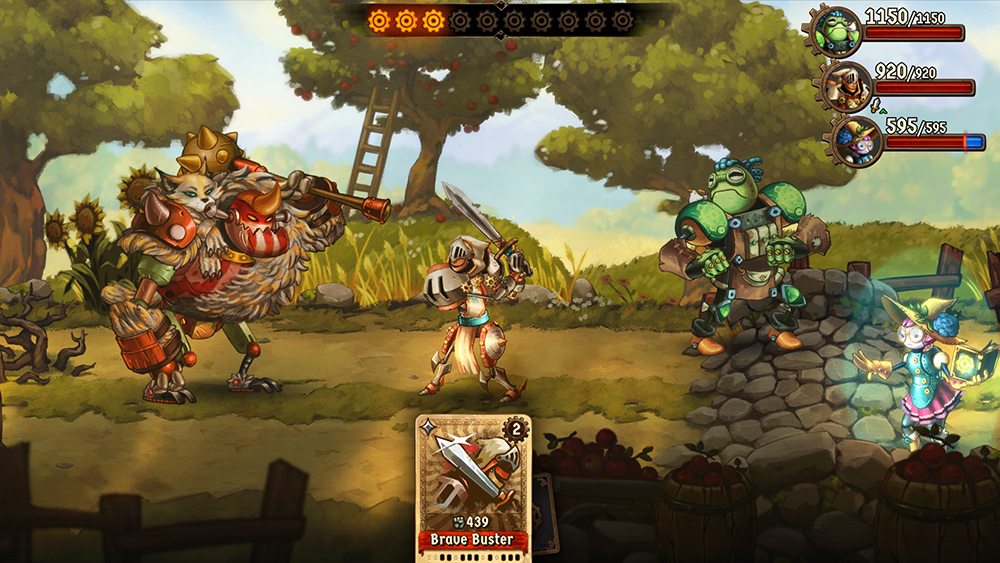 And then… Dammit. I was left. From the starting screen of this level, I never actually went backward, thinking forward was the obvious way to go. A chest and some treasure later, and I was up to 100% completion.

SteamWorld games do that to us. It’s not just about advancing the games forward at mach speed in the series, but exploring and collecting and completing everything. And not because we have to, but because that little carrot dangling in front of us is designed so well that it makes us want to.

And now here I am, hours and hours into this game that I could have finished days ago, but I’m glued to finding everything.

That’s all my fault, though. I severely underestimated Quest. An hour or so into the game, I had the feeling that it was going to move by quick. That first area certainly does, setting up combat and traversal and plot quickly, with minimal hand holding and tutorials. I don’t need tutorials, I know how RPGs work. Quest honors that, and lets me get right into the experience. That one hour turned into four, then into nine, then into twenty before I realized it. It’s a misleadingly big experience for a premise that could have been very shallow, but happily isn’t.

SteamWorld Quest mixes the series’ style of steampunk and robots with magic and monsters, harkening back a bit to that late Super NES era of JRPGs. There’s a lot of fairytale influence, with characters referencing older heroes and books, and is divided into Acts and Chapters, like stage plays. This feels like The Princess Bride with nuts and bolts and grease and steam, with lighthearted humor and intriguing, often bumbling characters. Better explained, this is perhaps a SteamWorld Dig 2 or a SteamWorld Heist RPG. It features the same itches that Image & Form have in those other games, namely completionism, unencumbered battle systems, and beautiful artwork.

Ah yes, that art. Made to look like a pop-up book, the game is designed with 2D characters on slightly tilted 3D rooms. They look like mini dioramas, like Paper Mario gone mechanical. It’s definitely a progression from their previous work, though not necessarily a complete overhaul. Image & Form have a good thing going with the SteamWorld aesthetic, so there’s no need to drastically change it right now.

The stages themselves are essentially maps divided into rooms, with enemies patrolling around them. Don’t want to engage in a battle? If we’re sneaky enough we can scoot past a coglin (that’s “cog” + “goblin”) but may have more trouble against a swarm of robotic bees. Because of the nature of the game structure — rooms connected to other rooms by doorways —  it may feel constrictive and slightly repetitive at first, but each room has a purpose never feels like it’s tacked on just to extend the length of play time. There are even nice little touches in the background details to help bring uniqueness to each scene if we’re paying attention. “This is where the heroes gather” says one of the characters, before we see a golf flag on a green off in the distance. 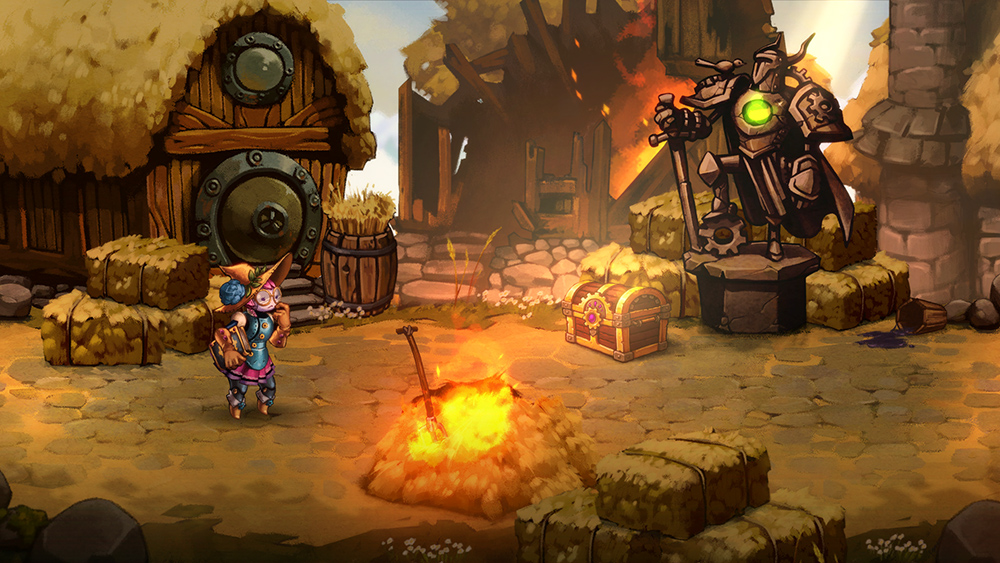 This structure also is relatively easy to travel at first (just keep moving forward!), but Image & Form love to throw some backtracking into their games, and here it can mean seeing a chest behind a gate that we can’t access until we release a lever somewhere else on a floor below. This lets the level design become more complex as the game moves along, providing fresh environmental challenges in every place we trek through.

It also seems to know that I love to EXP grind and get massively overpowered early in games to make my experience easier later. Sure it lets us return to previous chapters and use special save points to refresh the areas with enemies and get our levels (and hopes) up quickly, but Quest doesn’t actually want us to cruise through. It has a smart experience gain curve that makes it less worthwhile to squat, seemingly slowing down the effect of farming the same enemy packs over and over again. We can really only get so powerful in each section before the benefits diminish and it’s necessary to move on.

That’s where the strategy of the game comes into focus. 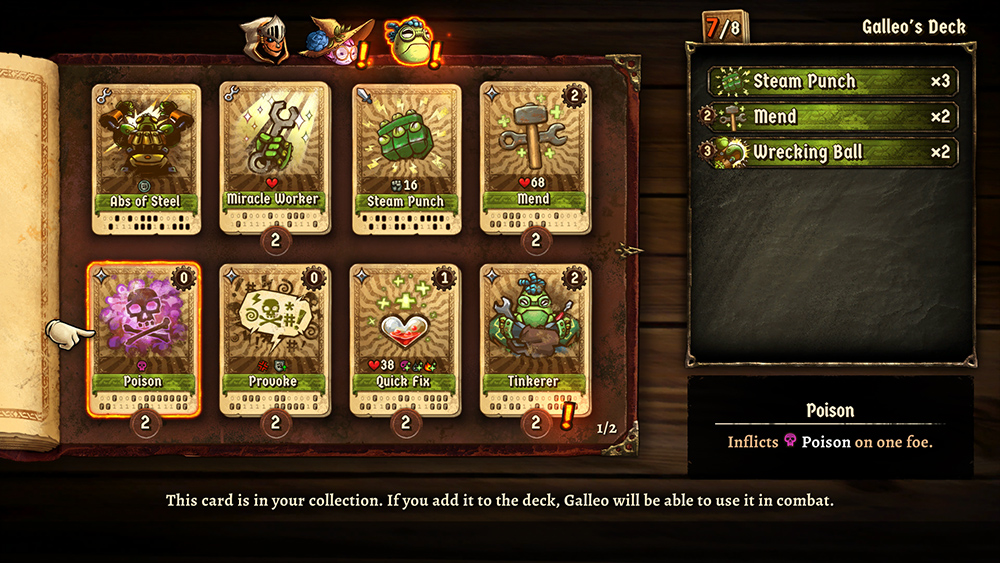 SteamWorld Quest’s use of cards in place of traditional movesets isn’t necessarily new, but it feels better than just spamming “Attack” over and over again. The system has us manage character-specific decks of 8 cards, with all 24 cards of our three-person team shuffled together during battle. As the battle progresses, we select up to three cards to carry out actions, based on the availability of the Steam Pressure points (a franchise mainstay) that we accumulate. These action points are gained by using weaker cards in a turn, requiring us to juggle between action types and strength all the time. There’s some great satisfaction in being near death and forced to wait out a round until an SP harvesting card arrives, setting off a strange domino effect that puts us back in charge of a fight. It’s more so enjoyable when we get chains of cards from the same character going, or combos between two characters, that lead to even more bombastic results.

Early in the game it’s easy to set most of our cards to attack sets and bully our way through, but as we get more card types we’re exposed to more ways that we can affect battles, like poison or buffs or environment-specific shielding. In a way it causes us to treat the game like a strategy RPG, asking us to be aware of what moves we have on the board available to us, and what we have coming up. It can force us to go on defense in one round if we know that we can unleash a powerful attack in the next, if the right card gets drawn. Like I do in friendly games of poker I like to play agen sbobet, I find myself counting cards a website (https://sbobetasia55.com) and trying to remember what I already drew before planning out some of my turns.

By limiting the amount of cards available to use at any given time, I’m amazed at how effective and enjoyable the experience is, and how easy it is to feel like I’m an expert in. Until we face a difficult foe, that is. There are moments in the game in which we come up against some truly treacherous enemies, and unless we’ve organized the perfect deck or had the right streak of luck then getting our mechanical butts handed to us is a foregone conclusion. 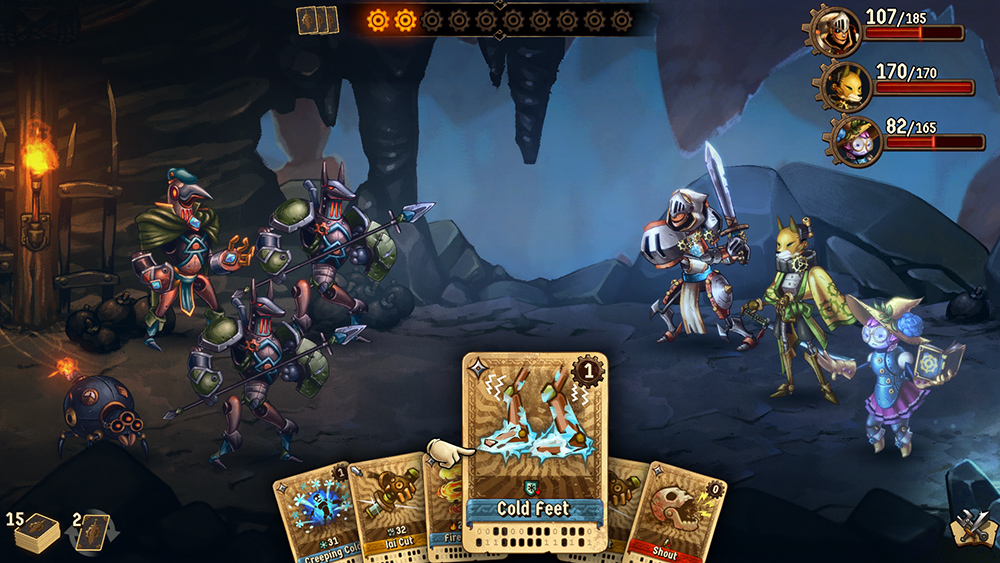 That’s why we have to be really cognizant of the cards that we’re gaining and playing. The cast of characters that we can use in our battles aren’t necessarily based on job types, but on individual styles that mix attacks and healing and buffs. Galleo, the big frog-like robot, is an expert in melee fighting, but also powerful at healing. Armilly has strong attacks and stronger team combos. Copernica has powerful elemental magic attacks as well as buffs and poison spells. They begin a little similar early on in the game, and don’t open up those strengths until much later when more powerful cards become available. That’s when the variety starts to materialize, and deck management goes from just “hit fast and hard” to “what’s right for a group of enemies that includes a bomb, sorcerer and coglin?”

That’s why I keep going back to those stages to open those chests I missed. I’m compelled to mix those cards, to set my optimal team and my preferred set of actions. And, just when I think I have it perfect and the game starts to feel like it’s repeating, it throws something new into the mix and I have to figure it out again.

I’ve always wanted an RPG in the SteamWorld universe. I thought it would just be of the turn-based, active time battle type that I grew up with. What Image & Form have created feels much more fresh than that; it has a classic aura with modern touches, an enjoyable battle system, and the itch to keep exploring. SteamWorld Quest: The Hand of Gilgamech isn’t just 50% steampunk and 50% RPG, it’s 100% its own, delightful thing.

This review is based on an eShop copy of the game for Nintendo Switch sent to SideQuesting by the publisher.

Dalibor, the reviewer, has played all of the SteamWorld games since the first Dig.