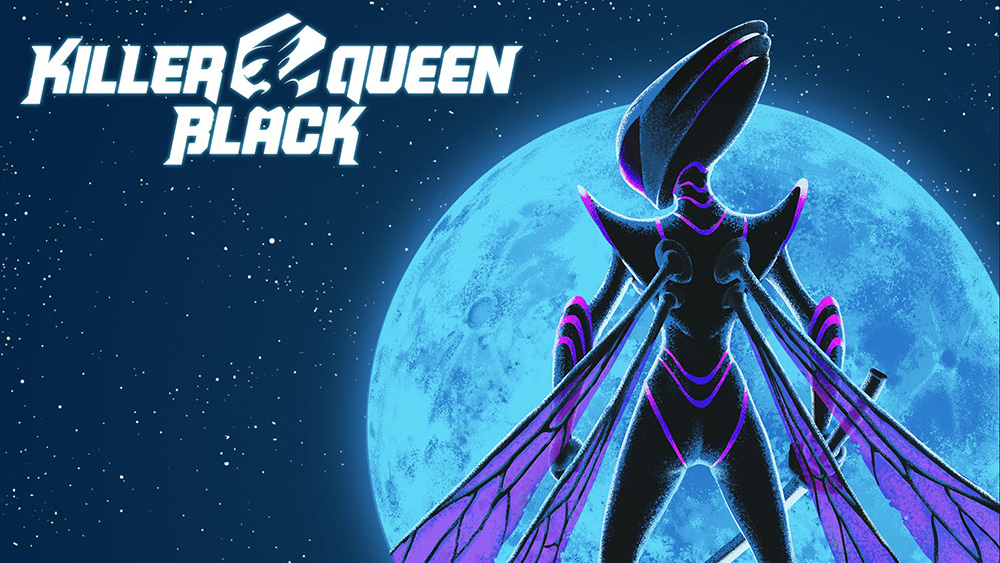 I will never be royalty. Nope. Definitely not. Royalty equates to being in charge, to being at the top of the pyramid, to being the focus. While I often think that I can handle those, the stark realization is that in Killer Queen Black, Liquid Bit’s home iteration of the popular underground arcade game, I’m better off in the trenches than on the throne.

Thankfully, there’s a place for me there, and it’s possibly just as enjoyable, and with a little bit of luck it can make me just as much a gaming hero.

KQB is at its heart a very simple concept: a 4v4 multiplayer game with multiple ways to win a match. Like Nintendo’s blockbuster Splatoon, players can choose which of those paths to take and which ways to contribute to the battle, and all are completely valid and important. Those three paths to winning are based on what the developers call Economy, Military, and Snail.

In Economy, players act out as tiny, chubby Worker drones that hop around the stage collecting berries to take back to their hive, dumping them into one of the open slots. Once all the slots are filled, the match is over and the team wins. If a drone enters a portal, it can emerge as a warrior that can slash left and right to take out enemy drones and the opposing Queen, which after three deaths results in a win. Players can also select to start the game as their team’s Queen, which can activate or switch the portals for their team’s drones, as well as attack the enemy with both the slashing attack and a fierce downward thrust. Finally, a third (and ultimately sneakiest) way to win is to mount the level’s giant snail as a drone and ride it to the goal. If the opposing team kills the rider, it can mount the snail itself and begin riding it the other way.

It may seem complex to explain, but it’s hella easy to pick up. The safest path is the Economy win, as drones can die and respawn as often as needed. The most difficult is undoubtedly the Queen, with only three lives and the weight of the team’s efforts on its shoulders. It is, for all intents and purposes, VERY EASY TO DIE, and that’s just the one aspect of the Queen that results in it needing an experienced, smart player in control.

I am not any of those.

The pressure for a Queen gets incredibly heavy, and thick. The position requires a lot of juggling and awareness that people may not be prepared for — I certainly wasn’t. It’s tactics and strategy, and all the buzz words of war that generals use to manage a team of combatants. I felt panic at times. I wasn’t watching every piece on the screen, which is something that a Queen absolutely has to do. Are the drones clear to get to the hive? Are the portals running for my team, or do I have to switch them? Am I being targeted by the opposing warriors and Queen? And, how many lives do I have left any ways?

Thankfully the game’s design is based on visual queues to let us know what’s actually going on. The drones are all the same: chubby and small. Queens are huge. Warriors are in between. The hives visually show how many berries have been harvested, and the portals are colored to represent whichever team tripped them last. And, the snail is either heading towards the left or the right of the screen along its slow path. The visual elements let us see everything on the screen and know our place, and set up the hierarchy for who is in charge and in the lead at any particular moment. And with so much going on at once, communication is absolutely the key to winning any match. If people aren’t communicating, they’re not going to win (and with the Switch’s less than ideal online communication methods, this can be a bit of a detriment to teams). The Queen needs to know and see and hear everything and everyone, and make sure we’re all doing our part.

But, again, I don’t need to be the Queen. I can be a drone or a warrior. I can grab berries. I can die over and over, at whatever pace I want to, as long as I add to the team in some way.

And perhaps that’s what makes the game so intriguing, and enjoyable. It’s a tug of war. If one side is killing the queen often, the other side can focus on harvesting, and vice versa. And if we so happen to distract our opponents enough, or knock out their warrior-evolving portals, then we can jump on the snail and ride its slimy behind all the way to the goal.

The hectic energy leads to much more satisfaction during wins, something that we don’t necessarily experience this way with other multiplayer games of this size. The game can seem lite, because at its heart it is, but the layers of challenge and teamwork are exposed to us very quickly.

The arcade version has a lot of underground notoriety, with its only 100 or so cabinets, but those play sessions get absolutely wild. They’re also 5v5 instead of the Switch’s 4v4 battles, so I’m curious if the Switch (and PC, and other versions) can match that fanaticism. Certainly, playing online seems to be very stable and chaotic, but locally is where I could see myself sinking more hours into the game. We can event team up with 4 of us on the couch and head online. To get the full 8-player local experience, however, I’d need two Switches with two copies of the game, linked together. Not ideal, but not out of the question for fans that play the game often.

At least that way the Queen can better control their team, putting royalty to the test. For the rest of us, we’re happy being drones. And riding snails. And that makes it hard to put down, especially on a drunken Friday night. Killer Queen Black feels right at home for us either way, whatever path our hive mind takes us.

This review is based on an eShop code for the game sent to SideQuesting by the publisher. Killer Queen Black is currently available for Switch and PC.