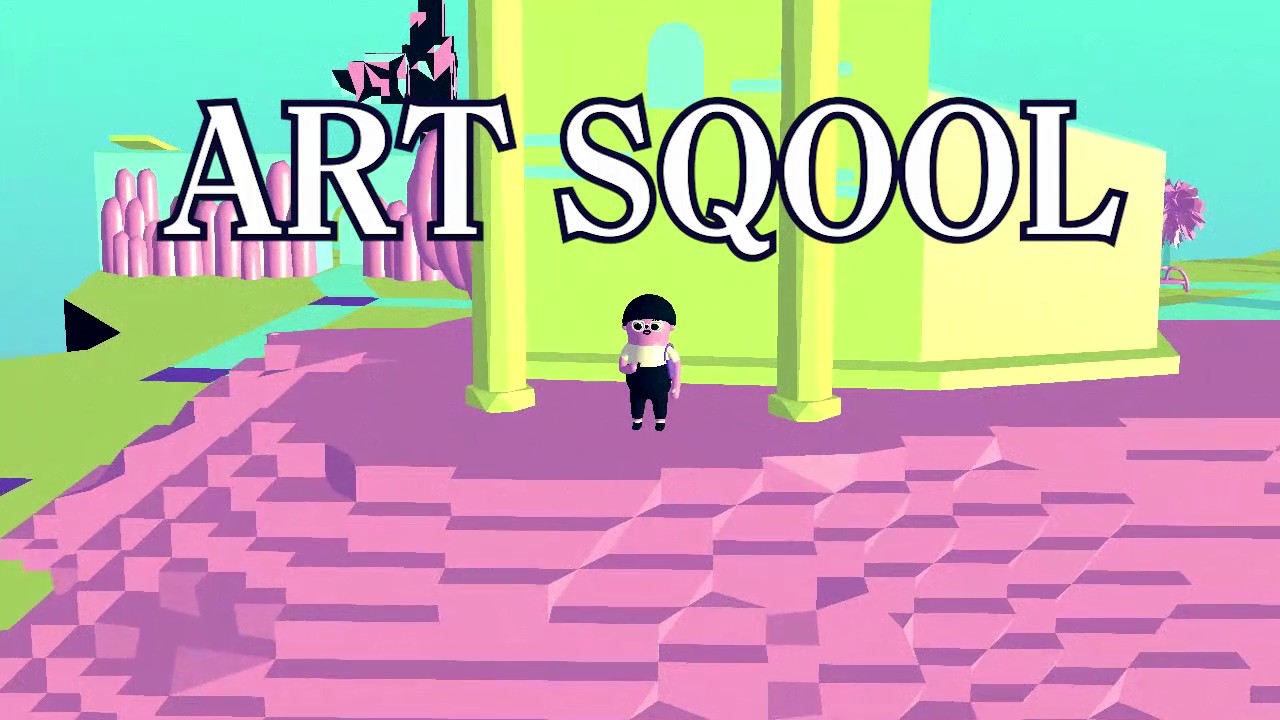 A novel idea squandered in almost every way

I went to art school for four years, followed by classes almost every year or so since either in person or online. I’ve even taught or volunteered several semesters at various schools. I lived on campus, grew my hair out and then changed its color, adapted my clothing and musical style daily, and encountered social interactions that I possibly couldn’t find anywhere else. My art school experience was basically the stereotypical one that pop culture forces upon us, with all of its bizarre glory and drug-induced metaphorical landscapes.

Art Sqool has been around for a couple of years now, landing most recently on the Nintendo Switch. It puts us in the role of a pug-like freshman student named “Froshmin” who is apprehensive about his new experience on an AI-led art school campus. The AI feeds us assignments that we need to sketch out, while navigating around a surreal environment.

Let me get a couple of things out of the way first. The aesthetics of the game teeter into vivid and varied color palettes covering hypnagogic terrain. Being able to switch (pun!) viewpoints, from first person to third person to isometric, allows us to explore the setting in any number of ways. It’s kind of nice to see something in completely different vantage points because it could affect the experience in any number of ways. The soundtrack is also bizarrely cute, focusing on robotic introspective songs that Froshmin sings during scenes. It’s all so weird.

However, a setting and nice tunes don’t make a game any good, and sadly this is the case here, and why I’m angry.

The central focus of the game is the art we’re asked to create, but that is completely separated from Froshmin’s world. The AI instructor tasks us with an assignment, which could be anything from drawing a fast car on a slow car, or what we see in the mirror, or what might cost $34.42. We’re given a grade once we submit our art, and should we pass (getting a “C” or better) we’re able to move onto the next one. The prompts get more and more offbeat and ludicrous as the game progresses, so it might be common to think to ourselves “how the hell am I going to draw THAT?” Don’t worry, because it doesn’t matter: every assignment can be passed by just drawing squiggles.

That’s it. Squiggles. Maybe some dashes and splats of color, but those are more for your own embellishment, really. The grades don’t even matter, either. My better art, that I took time to create and that hit the assignment damn well perfectly, almost always got lower grades than the crappy stuff. It’s misleading, because the game never really tells you what your goal actually is — which in this case feels like just hitting tapping “next” until the credits roll. You don’t even need to move your character around the environment. Sure, you can venture out and find art tools hidden here and there, like a new color or a rainbow brush, but why? You can still get a high rating in the “color” category of your grade just by using the preloaded black pen. I only ever need to just sketch something up on the blank square on the screen, turn around and submit the assignment.

The controls leave a lot to be desired, too. Moving around the world is okay, though again you never need to, but utilizing the art/sketch portion is abysmal, especially on a device seemingly made for touch screen art like the Switch it. The workspace is small and off to the side, often making for a difficult time if you have fat fingers like I do. There’s a way to zoom in and sketch, but the tool palette disappears and the cursor is actually misaligned, so touching the middle of the “paper” actually sends the brush drawing off the side. Couple that with poor joystick controls (you can never get me to sketch with an analog stick, sorry, and especially not here) and tiny text, and you have an incredibly subpar experience.

But then, I have no idea if that’s even the point. Am I supposed to be frustrated playing this? Is it intentionally badly designed? Are things not supposed to work as anticipated? Is that the gimmick?

I don’t know, and that’s the part that makes me salty. Even taking a fine arts open studio, where I was handed a brush, canvas, and no rules or support, left me feeling more focused. Art Sqool leaves me feeling like I wasted a semester.