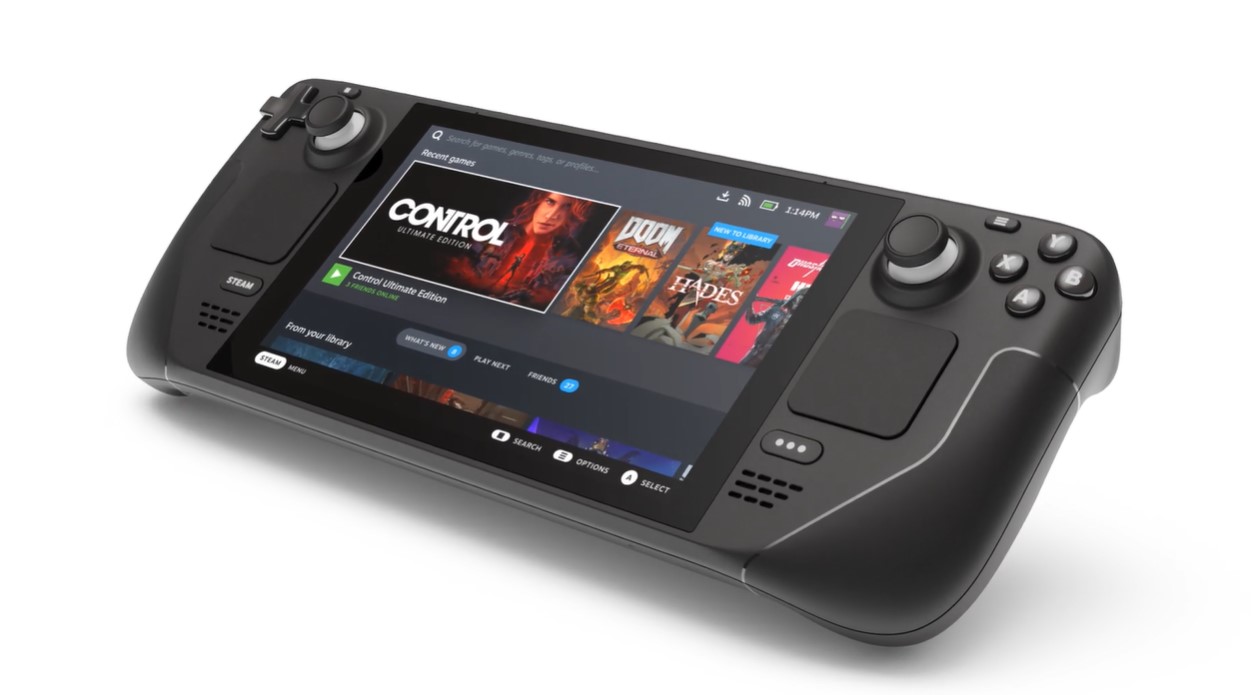 Time to SWITCH from a desktop to a handheld

It truly is Christmas in July, as Valve has revealed its latest gaming platform: Steam Deck. The Deck is a portable gaming PC built on Valve’s Steam OS software with the Steam experience baked in. It has a 7-inch touch screen, full access to account libraries, and can be docked to output to larger screens.

At first glance the device looks an awful lot like it’s aping Nintendo’s mega popular Switch, but the resemblance essentially stops there.

For all intents, this is a gaming PC focusing on Steam. It’s not necessarily a Steam Box (RIP) but it’s most definitely the natural evolution of the concept: Valve wants you to stay and play in the Steam ecosystem, and it’s willing to take a loss to get you there. We’ll get to that in a bit.

The device is nearly a foot long, with a 7-inch 1280×800 60hz screen and a variety of storage options from 64GB to 512GB. The higher end even has tempered glass. The Deck has 8 face buttons, four shoulder buttons, a D-Pad, two analog sticks, and two touch pads meant to give the experience of using a mouse. The Deck also has a gyroscope built in and four programmable back buttons. It can interface with Bluetooth peripherals and audio, such as Airpods and headsets. A separate dock or cables are necessary to spit out to a monitor.

The internals are beefy for such a small device. Built off of some great specs, the device seems to pack as much as an Xbox One, if not more, into its (not so tiny) form factor. Valve is working with AMD to include a custom APU, built from a Zen 2 CPU and a RDNA 2 GPU, with 16GB of LPDDR5 RAM. The 40 Whr battery can hit 2-8 hours, depending on game. There’s also a microSD slot to expand the storage.

The key selling factor is that Valve claims that all Steam games will show up and work on the Deck, though how well really falls on the developer, as it does with a game on any other gaming PC. However, Valve wants potential buyers to know that AAA games should work just fine on the device.

Utilizing a variant of SteamOS, the Steam Deck can even sideload into Linux or Windows, should users decide to go that route, allowing for even more opportunities (Game Pass, anyone?). Valve’s dock will include 2 USB 2.0 inputs, 1 USB 3.1 input, DisplayPort, HDMI, LAN, and power out, and connect to the Deck via USB C cable. The dock doesn’t seem to automatically charge the Deck when it’s dropped onto it; rather, users will have to plug in the cord and use the dock like more of a stand.

The Steam Deck goes on sale in December, with preorders starting on July 16th. In a follow-up interview with IGN, Valve’s Gabe Newell noted that the relatively low price for the powerful device is essentially selling it at a loss, but necessary to move it forward. Valve is willing to The base 64GB unit will run $399, the 256GB will hit $529, and the 512GB edition with the tempered glass lands at $649. All editions come with a carrying case.