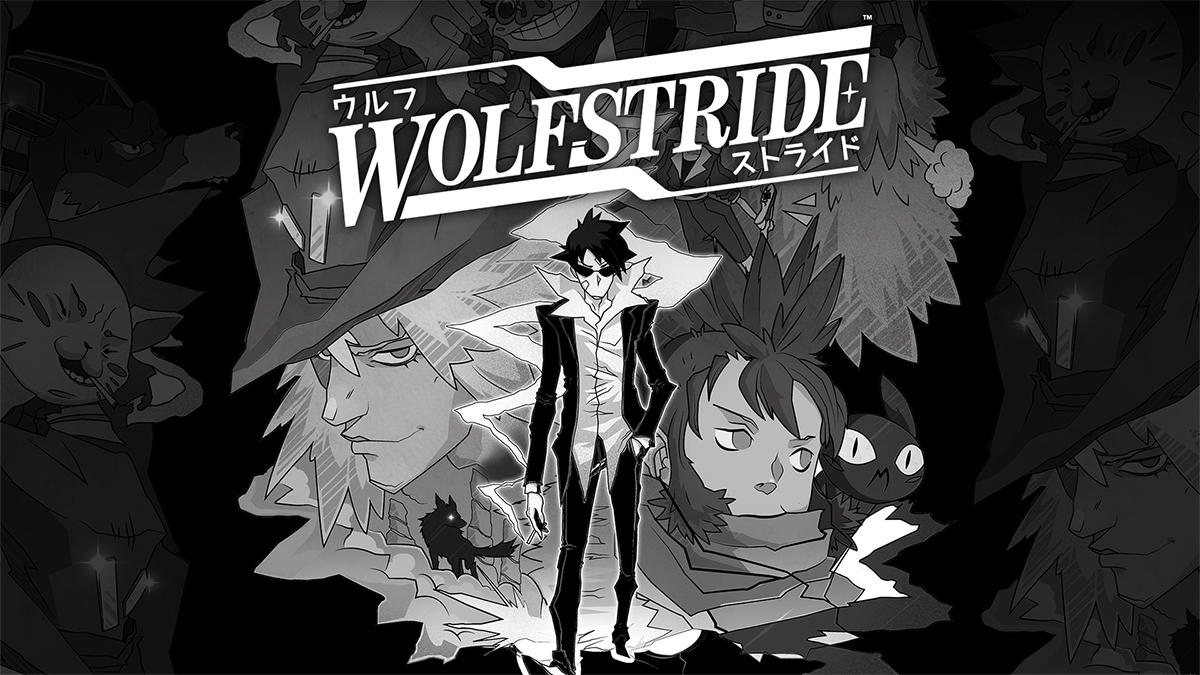 Mechs and storytelling meet in a wildly artistic mashup

There are some games that when you start playing them feel like they are having a hard time knowing what kind of experience they want to offer or have difficulty finding their voice until later on. OTA IMON Studios’ Wolfstride is not this kind of game; it knows exactly what it wants to be and it’s not afraid to embrace it wholeheartedly. It is a game that will never take itself too seriously and will revel by going at it even in its most dramatic moments.

With a full cast seemingly picked up from random pages of Shonen Jump through the years, and a story to match it, Wolfstride will feel very familiar to some to the point of being able to identify each of its never masked references. At first it might seem quite cliche, even cheap, like grabbing on to the easiest troupes it can get a hold of, hoping to pull a very specific niche of the anime and manga audience, but soon enough it takes a shape of its own and the initially very generic characters become alive and unique.

Wolfstride opens up and shows that first appearances can be deceiving, deepening the bonds with the player and tying them up to a story that they will like to hear more of. Thanks to the no pulled punches dialog (a bit excessive on the cursing for sure), once given a chance it grows on you, indebted to a well executed and selected voice cast, and soon enough you are in for one more episode of the story with your likeable ragtag team.

Wolfstride’s most prominent feature at first glance will probably be its aesthetic. Going for a full black and white design might be both appealing and discouraging depending on the type of player you are, but it would be a pity that some might miss on this tale just because of it. If anything it adds to the game as its art and dramatic moments shine even brighter because of the added contrast. It might seem like a simple game at first, but Wolfstride packs some hidden punches both in gameplay and storytelling that will make your time worth it, should you give it a chance.

You are a team trying to make it big in the fighting circles, but these are no ordinary fights, these are giant robot fighting machines and you are starting from the very bottom. The game mixes a neat approach to RPG turn-based combat and strategy in a 2D plane, where you have to mind and manage at least 4 pieces of your machine. Depending on how you customize your gear you will be able to perform attacks or other actions with your left or right arm, use tactics, and manage your limited resources during the fight. Then there’s the other part of the show: you need to make sure you are in control of your space and where you stand in the battlefield compared to your opponent. Get too close and you might be in for a hard punch, or too far away and you could be on the receiving end of a full charge attack pushing you into the ropes. You learn this early on as you have to take advantage of risk and reward moves.

Along the way you will learn better moves, both offensive or defensive, and specials. Customizing your machine to each fight is key, as is repairing and upgrading it from past fights so you can go in your best condition onto the next arena hoping to rank higher. This in turn costs you money, which of course your team is always struggling with. It’s one of your tasks to help secure the funds for your team, bringing you to the other side of the game and what ties together the complete experience.

Interacting with other characters is key as the more you learn about them and relate, the more they will trust you. Some give you opportunities to make money by performing tasks as simple as delivering a package or helping them uncover missing treasure. Later on they favor you because of having developed deeper bonds by experiencing more of each particular tale, should you dig deep enough into their stories. And Wolfstride definitely wants to tell you a story that, as said before, comes alive thanks to its excellent voice talent, that the least you can say is that it passionately does its best to deliver it.

It’s clear that the developer carries its influences as a mark of pride, and why not? The people that do get the idea will have a blast with Wolfstride. It is a work of passion and it shows in how it’s presented. The only complaint, if any, is that there is a bit of too much exploratory walking around that can distract from things moving forward, but when the combination of character building and gameplay pays off it does so handsomely. In the end, Wolfstride‘s take on RPG strategy and storytelling creates a powerful one-two punch combination that many may ultimately enjoy.

This review is based on a code sent to SideQuesting by the publisher.