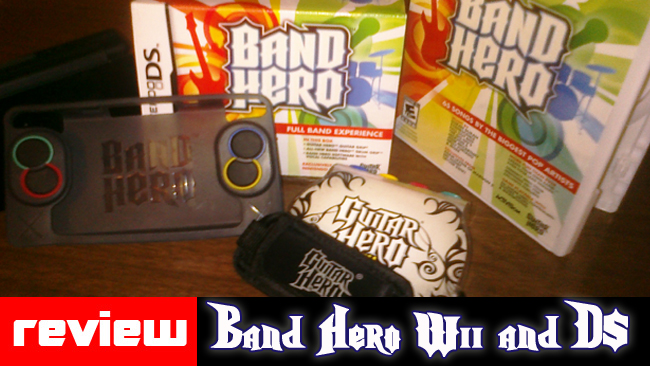 Activision rocks and rolls out some more fill-in-the-blank Hero games.  Does Band Hero have enough to stand apart from the myriad of other music rhythm games?  Rock past the jump for more…

The guys who pioneered the peripheral-based music games are pumping out the software now that we all have a stupid amount of plastic toys strewn about our living rooms, and Band Hero is advertised to work with “most” music rhythm game peripherals (i.e. Rock Band instruments as well).  My first outing with Band Hero was on the Wii.  I own the original Rock Band paraphernalia for the Wii, so I was glad to know that Band Hero was peripheral agnostic.  Band Hero on the Wii also has connectivity with your Nintendo DS, a feature I was pretty interested to get into. 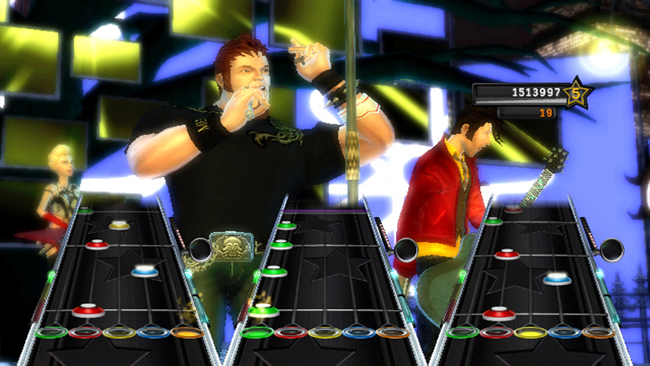 The game play here is just as you come to expect from the Guitar Hero and Rock Band type games.  It has party mode, which is great to just jump into a song right away.  I invited a few friends over so that we could all try out the Band Hero goodness together for the first time.  One friend has not played any of the rhythm based games, and the second is familiar with Rock Band and enjoys the genre.

Jumping right into the game, calibration was an issue (as it normally is when playing for the first time).  We experienced a few issues calibrating the guitars — the instructions and prompts to help you calibrate were less than impressive, but good enough so that the game was playable.  However, trying to calibrate the drums couldn’t have been more frustrating.  In fact, we ditched the drums soon after and went with just Guitars and Microphone.  We had fun, but no more fun than you’d come to expect with this genre now.  The issue that we also ran into was the set list.  This very quickly became apparent that it was for a younger crowd.  My friend summed up the experience by exclaiming “This game is for ***-damned Teenagers!” in his best, “Get off my Lawn!” curmudgeon voice.  And it is, but it’s still fun if you are into music rhythm games and less concerned about bobbing your head to The Black Eyed Peas.

Let’s go back to the problem with the Drums.  After my Band Hero party, I went back to try the drums again by myself. I spent over an hour trying to calibrate them properly using the tools in the game.  I had enough, so I popped in my Rock Band II disk just to make sure there wasn’t something wrong with the drums or me.  I bought it some time back, but hadn’t gotten around to having another Rock Band party to try it.  Within 5 minutes of popping in the fresh Rock Band II disk, I had calibrated the drums and hopped into a song, scoring 94% accuracy.  I took the calibration settings and wrote them down, popped Band Hero in again, and manually adjusted the latency with the values I got from Rock Band.  After that I was up and going, with no issues with the drums from there on, but ultimately left me thinking that this package (disk-only) is in no way worth $50.00 when track packs for Rock Band or DLC for other rhythm based games would garner the same enjoyment for a reasonable cost.

Unless the music packed on this disk is your taste, this game is only recommendable to those who really love the rhythm games and those folks likely have every Something Hero/Rock Band disk out there. 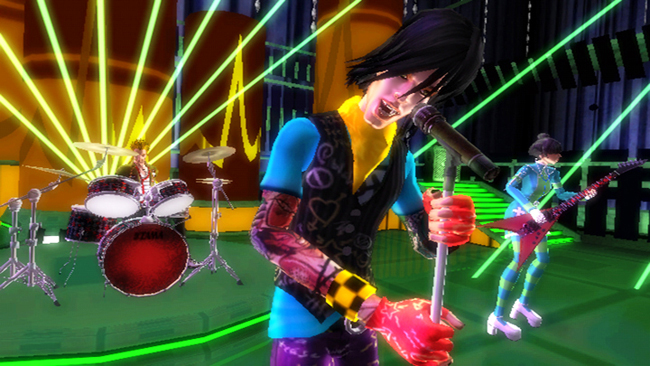 As for the Nintendo DS connectivity?  It was a bit disappointing.  It uses the downladable abilities of the DS to download the software temporarily to your DS.  During Party Play, it allows the user of the DS to pick, add and rearrange songs in a set list.  I suppose if you didn’t have enough instruments around (but have a DS) and someone who would otherwise be left out, they could at least fiddle around with the songs while people rock it.  I had actually hoped the integration with the DS and Wii would involve the DS version of Band Hero.  It could be a really cool inter-platform feature if someone who had the DS game could literally jam along with people playing on the Wii.

Speaking of the DS version of the game, I was able to check that out as well.  I was extremely surprised at how much fun I had with the portable take on the game.  The DS version retails for about $50.00 (same as the Wii disk), but includes add-ons for the DS to play guitar and drums.

It doesn’t require you to buy anything piece-mill; everything for a full band experience is included in the box.  The unfortunate down-side is that it only works with the Nintendo DS Lite.  So folks with older hardware, or the new DSi, are out of luck.  I tried the peripherals on the DS Phat, but the GBA slot is recessed in to far for the Guitar Controller to plug in, and its too girthy for the plastic drum covering to fit over the DS Phat.  Since the DSi omits the GBA slot, at best all you could play is drums (with out the pad that color codes the buttons) or sing, since all versions of the DS hardware include the built-in microphone. 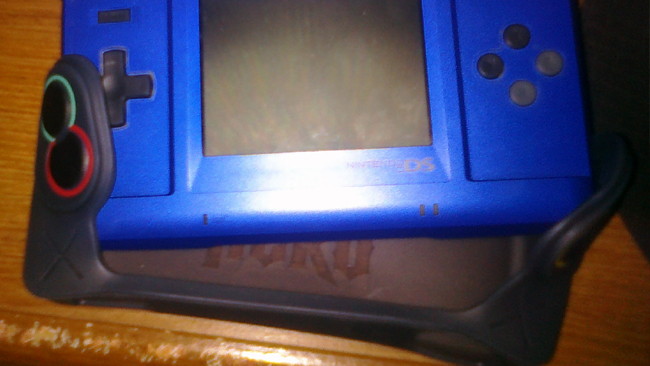 Typically one of the great experiences with these music games is playing with a group of people.  The DS however is a small portable device, typically promoting single user play.  I fully enjoyed playing this game by myself.  At first I started with the drum pad, and after playing the first song I thought, “This is ridiculous.”  My coordination playing this version was all over the place.  I must have failed the song within 3 bars.  I scaled it down to easy mode, and gave it some more time.  I never quite got up to hard but had plenty of fun playing a few songs in bed, before going to sleep.  I never played the original Guitar Hero for the DS, so the guitar peripheral for me was also a new experience.  I struggled to find a good way to hold it.

The splash screens in the game before the menus show up give suggestions on how to “Rock Out” and showed the “proper way” to hold the DS with the Guitar strap.  It said the best way was to loop your thumb through the strap, instead of the instinctive cupping of the unit, palm facing up.  I tried both and found the thumb loop to cause me to yank the game pack out during play, which causes you to restart the system.  After finding a comfortable way to hold the unit, I had just as much fun as I had with the drums. 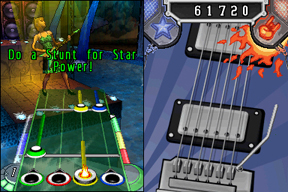 There were a few times I was tapping the touch screen a little too hard and fast, causing the unit to shake to where I couldn’t focus on the music highway properly during harder songs.  But all in all, I really enjoyed the DS version.  It truly gives you the full “band” experience; Guitar, Bass, Drums and Singing.  The singing worked about as well as its bigger brother, but I felt really stupid singing by myself, so that was not something I did more than one or two songs.

Unfortunately I couldn’t try any multi-player.  My only friend with a DS has the DSi and my second DS is the DS Phat, so while it would have been technically possible to do some of the multi-player stuff I was having plenty of fun with single player.  Trying to kludge together a multi-player game with a friend wasn’t something I wanted to do.

The DS game has the same issue with the console versions — the songs.  However, while the aim is still clearly younger for both, I found the DS one to have more “guilty pleasure” type songs that made me enjoy it more.

The music rhythm games have a lot of competition in the portable space now with the iPhone and other portable devices.  I don’t see any sane person walking around with their DS holding it in some contorted way with a crazy add-on in public just to play a quick song or two.  But let’s be honest — we never take our DSes anywhere out in public anyway.  I don’t have a commute, nor take many trips, or have lots of standing around time that would necessitate always bringing around the system.  The enjoyment of my DS is that I can sit on the couch and play some truly unique and inventive games that are typically in bite sizes that I can handle (i.e. not the 40 hour long games that I can never finish).  So for that alone, I think Band Hero for the DS is great.  If you are a multi-DS Lite house hold, this may be a great addition.  I can see it really being great for kids, as it comes with everything you already need right in the box and won’t clutter up the living room with plastic toy instruments.  For the price and value, if you’re deciding between Band Hero DS and Band Hero Wii, I think you’ll be surprised at the fun to be had with the portable.