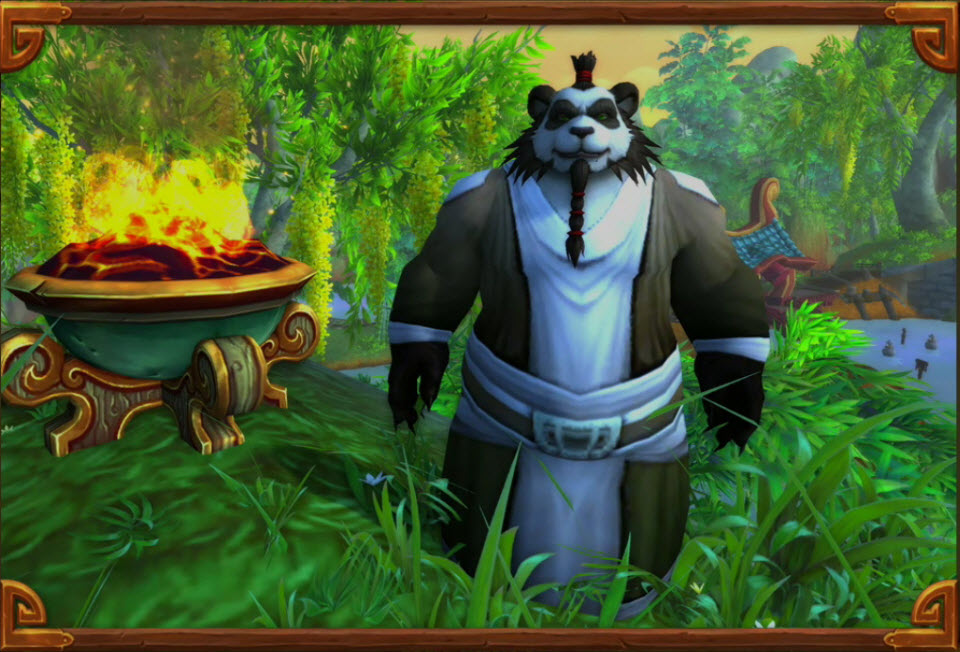 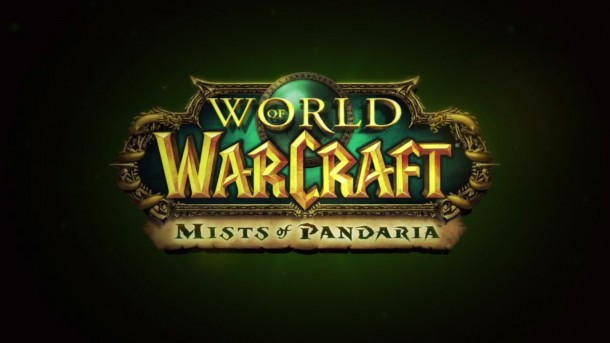 As soon as I heard the “Mists of Pandaria” moniker, I rolled my eyes–a reaction I’ve never had from a new expansion announcement. The idea of an expansion’s worth of content focusing on the Pandaren, a mystical race that began as an April Fool’s joke, was disappointing, especially for a fan of the lore, aware of locations just aching to be explored. Now it’s official, WoW’s newest expansion will allow players to explore the home continent of the mysterious Pandaren race and play as them too. This expansion marks the first of Blizzard’s faster content cycle, I was quick to describe it as a copout, but after seeing what they have to offer, I no longer believe it is.

Over the past seven years since WoW’s launch it’s gotten increasingly more cartoonish and playful. Gone are the savage looking armor sets and the grotesque demons littering the various dungeons, to make way for foam weapons, motorcycles, helicopters, and now, a playable Panda race. The Pandaren are the hardest to defend, take a look at them, they’re a race composed of bipedal Panda Bears–there’s no getting around it. But they fit seamlessly within the confines of the colorful and whimsical road WoW has been following for the last few years. If you don’t like it, you probably haven’t been subscribed for quite some time, or you have learned to ignore it.

The addition of the Monk to the class roster was a well needed and requested addition–I couldn’t be more excited to try it out. Fist weapons have very rarely found a use, it was only when a specific one was the best you could get. Now we have a class that fully endorses them, focusing on pure melee combat, a “Street Fighter” class as Greg “Ghostcrawler” Street put it during the preview panel. Able to perform all three archetypes, in terms of immediate population, Monks are going to be much less dense than Death Knights were during the beginning of Wrath of the Lich King. And hopefully they’ll add some largely needed flavor to the tank and healing roles. 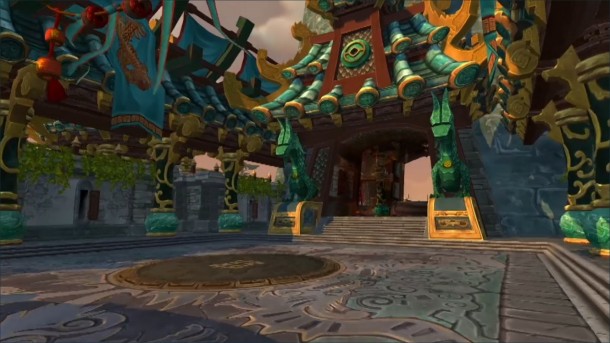 Blizzard has the unique talent to tackle environments from all sorts of backgrounds. There was the Gothic architecture of Naxxramas, the African-infused tribal nature of the Amani dungeons, the twisted, demonic planes of Outland, and the frigid lands of Northrend. After viewing the screenshots of Pandaria, I was immediately stricken with the Asian influences emanating from the colorful pagodas and landscapes filled with Bonzai trees and the like. Blizzard has a way with environmental design that is arguably one of the largest reasons people love immersing themselves in their worlds for such long periods of times, and it’s clear they had the time to replicate, if not exceed their excellence in the new expansion’s setting.it

As usual when it comes to MMO expansion packs, the level cap was raised from 85 to 90. It has always been a crucial part of WoW’s design to let players slowly unfold the inner workings of a new land by way of questing. Numbers can be very arbitrary and if Blizzard didn’t stop inflating them since Burning Crusade, we would have level 100s running around, bringing an unnecessary and bloated feel to player description. With an increase of five levels, Blizzard will hopefully take the time to focus balancing the core abilities and talents instead of trying to work with five extra levels that are quickly forgotten once you’re through with questing. 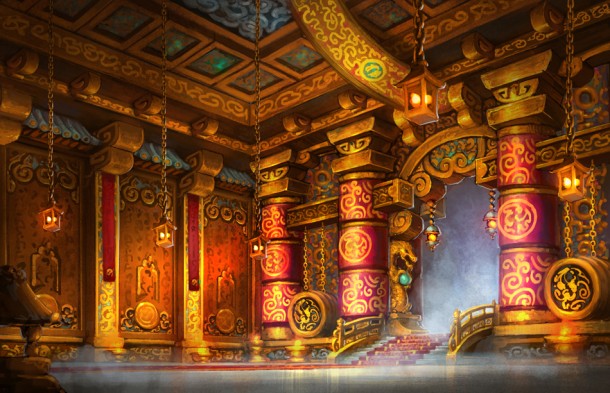 It’s clear once an expansion hits a middle-point the earlier content gets easier as the gear gets better. Heroic dungeons become more and more tedious as the level of challenge decreases to an hour of mindless button mashing. Blizzard never found a way to fix this other than to make the time it takes to gather a group and finish the dungeon faster. Challenge Mode Dungeons are a great solution to the problem. It asks a simple question: how fast can you do it? Making speedy runs through a heroic is old news to a WoW player, at the end of WotLK a 45 minute dungeon could take as low as 15, if you had the skill and the gear. With Challenge Mode, Blizzard has introduced bragging rights to the mix, one of the most important things WoW’s community thrives on, and will no doubt enjoy.

Warhammer Online: Age of Reckoning did a lot of things wrong, but the few it did right, Blizzard is still slowly incorporating into WoW, PvE Scenarios are just another one of those things. Public Quests, as they were known in Warhammer, broke up the monotony of questing, letting small groups of players tackle simple objectives, not having to worry about tanks or healers to get their greedy hands on almost free, valuable loot, maybe even meeting new friends in the process. Blizzard hinted at ditching the traditional group quests for these easy to queue, quick to form and finish alternatives. With successful application, PvE Scenarios could add a little variety to the already stale leveling experience

I like the Pokemon games a lot, and today Blizzard exploited my secret addiction. The new Pet Battle System introduced in the MoP is straight up Pokemon, so much so that I wonder what it feels like to be working at Game Freak right now. Did they double-take when Blizzard said (what were once non-combat) pets will be able to battle, learn abilities, and level up? I would be shocked if they didn’t punch a hole in the wall when Blizzard said you could attain (see: catch) them, even going so far as having certain ones native to specific locations. What more is there to say? Blizzard completely ripped-off the Pokemon games and put them into WoW. A large amount of players already find collecting the now useless pets compelling content, giving the pets meaning other than looks and a full-fledged game to play will probably blow their minds. 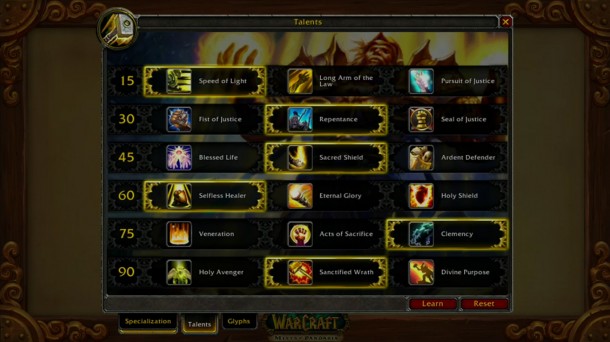 Lastly, we saw a complete revamp of the talent system. The concept of a talent “tree” is gone. Blizzard is putting a large emphasis on having players offer similar roles with completely different tactics, all while letting personal preference override crunching the numbers to the point of having set “cookie cutter” specs. The focus is put on the feel of the talents and no longer just the utility. Cataclysm helped to blur the strict lines around what some players feel are mandatory talents, but it didn’t completely eradicate it. The new talent system is impressive and limiting. Unfortunately, the hardest of the hardcore are still going to require that certain talents and abilities be taken for specific fights, luckily, Blizzard promises that you will be able to change your talents around while out of combat, exactly how you’ll go about it is still unknown.

The amount of information and assets they showed off leaves no doubt they’ve been working on it for a while. I wouldn’t be surprised if we are meditating with our panda friends by Spring next year.

I’m happy to admit I was wrong in my thinking that Mists of Pandaria would be a bad excuse to fill time before a “real” expansion comes around. They managed to scratch that WoW-itch once again, a feeling that has been shifting to and from me for the better part of two years. Blizzard is making a smart and now crucial decision to push out more content in less time, I just didn’t realize they were capable of it.  Now if you’ll excuse me, I’m going to go reserve the name “xjackblackx” for my Pandaren Monk.