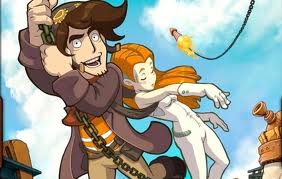 Automobiles were once things of great beauty. They gleamed and roared under their lovingly crafted bodywork designed by the sort of people that had more in common with artists than engineers. Then things like “power steering” and “anti-lock brakes” came along. Suddenly, cars weren’t the hurtling metal deathtraps of frustration that they had been for so many decades. Suddenly, they were being built by the sort of people in white lab coats who knew how to make them work properly, but not necessarily how to make them look exciting and timeless the same way that the artists did.

Deponia is one of those classically designed beauties, brought into the present without what makes modern adventure games… modern.

The gameplay in Deponia has been ready for decommissioning for years. Not that it’s bad, necessarily. It’s just that it’s worn out its welcome. 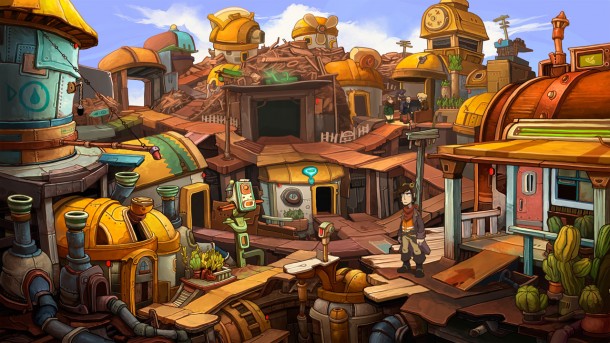 It’s not a failing, exactly, that Deponia‘s gameplay is as old-school as they come. Some will take to it like a well-worn leather seat. They will regard it as something familiar and readily accepting of their decades old routine. Enter an area, collect items, combine those items, use said combined items on other items until you progress, and repeat. It’s certainly a formula that has survived the ages, but has it really weathered them?

In the days before things like The Walking Dead — when we hadn’t thought of exciting ways to progress an adventure game’s story or found new methods of stretching out a few minutes of dialogue over multiple hours — that formula was all that we had. But now, the shine has come off the paint and rust has begun to set in. The game’s moment-to-moment action is worse than bad; it’s boring.

But so what if it’s old and antiquated? There are plenty of game’s out there that feature all of the shiny, modern innovations of game design. Let’s talk about the look of the thing. That classic, gorgeous, 2D aesthetic.

My immediate impression upon seeing Deponia for the first time was that I was looking at the aesthetic successor to The Curse of Monkey Island. The game sports gorgeous 2D art that looks more like a feature length animation than a video game. With its broad, smooth lines and deep, flat colors all surrounded by a unique dieselpunk aesthetic, I braced myself to be instantly charmed.

And then the characters started moving. And talking. 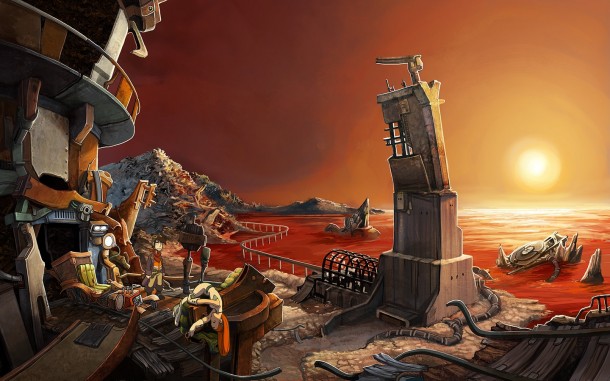 The obvious love and care that went into the look of Deponia obviously didn’t go into the rest of the game’s presentation. The animation is jerky and full of what appear to be missing frames. This could have been passed off as a stylistic choice, but the game’s cutscenes are so fabulously smooth and well-rendered by comparison that it’s hard to think of it as anything but a budgetary constraint. And while the cutscenes are genuinely superb, they only show up often enough to remind you of how great the rest of the game could have run.

But the visuals are only the least of Deponia‘s bittersweet half-measures. The strangest and most grating of which is actually the game’s audio.

Deponia was developed in Germany and only recently localized into English. I use the term localized quite loosely, as the game’s dialogue is intermixed odd anachronisms, out of place Britishisms and simply bizarre terminology. I really couldn’t tell you what ‘gnat’s piss’ or ‘exchequers’ are supposed to be, but Deponia assumes that you already know.

The weirdest part about the dialogue, however, stems from the voice acting. In a vacuum, each voice actor sounds absolutely fine. Good, even. However, when the plot calls for any sort of interaction between two or more characters, things get… muddled. 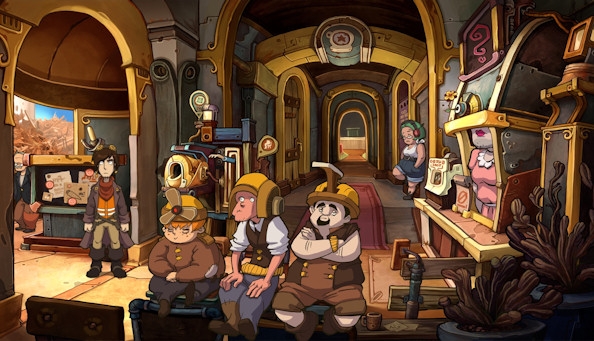 The pitch and cadence of dialogue just seems somehow wrong. It’s as if every actor was given a script with minimal context and direction and told and the results were simply stitched together in the hopes that no one would notice how unnatural it all sounded. There are a few well-timed moments when a clever one-liner manages to sneak through and surprise you with genuine laughter. However, much the same as with the visuals, these few shining moments only serve to fuel your disappointment as you find yourself waiting, hoping that Deponia will continue to give you another reason to enjoy it.

In a genre where comedic timing storytelling are nearly everything, it’s incredibly disappointing to see what could have otherwise been a very funny and charming experience fall so flat due to what was likely a budgetary or time-management failing.

That’s not to say Deponia is entirely without any auditory elements worth praising. The game’s music is utterly fantastic. The soundtrack seems like a mix of otherworldly beats as performed

While there’s certainly room in the world for modern interpretations of classic ideas, Deponia is limited by its weak technical execution and a disappointing localization. Even if it weren’t for these failings, adventure games — including those titles that do emulate the classic style — have made such massive strides in tempering nostalgia with modern contrivances. Deponia is simply everything you used to get from adventure games, rust and all.

This review of Deponia was based on a copy of the game provided by the publisher.