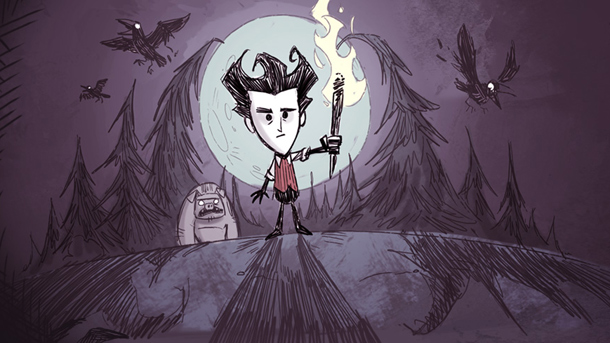 Video games are made in the hopes of attaining results like Don’t Starve. This is a game marinated in the element of basic nature, and what that means within its world. Indeed, Klei Entertainment’s latest concoction is a merry front-flip into the waters of action and reaction, discovery and unpredictability. Don’t Starve demonstrates numerous instances of intrigue through many virtues of design, but its primary pulse is the logic within the game’s reality.

Hence the title Don’t Starve. It’s a game most easily labeled as an open-world survival game, though drizzling a genre classification onto a game’s title has, traditionally, irked me — particularly in this case. You’ll first play as Wilson, a well-coiffed man of science awakened by a mysterious, sharply dressed fellow named Maxwell. He lets you in on some key information: you’re stranded in a newfound land — best find some food, yes? And you do, or rather, you have to. The presentation of the alien terrain is emblazoned with the fear and excitement of the unknown. What’s seen is a delectable art style calling forth the names Brett Helquist, Maurice Sendak, Tim Burton, Henry Selick, and other creatives — the restless ocean acts like layered theater cut-outs; still trees and grasses sing the same songs as picture books; the more animate pieces of the world are operatic in style. The environment teems with damp, succulent colors. 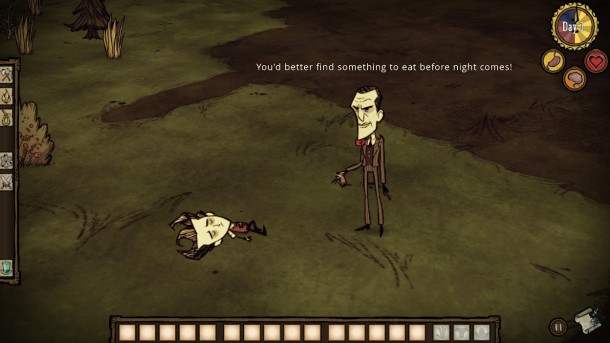 Don’t Starve is extra-inviting with its use of a near-simulant model of play. Scroll with your mouse, and the camera elevates into the clouds for a bit, and then back down a tad. It takes a semi-top down approach, with many of the surroundings lying out of frame as to make for some surprises in what you might find. The land is populated by items like carrots, flowers, seeds, and birds. Don’t Starve is devoid of introductory tools, and is much better for it. You’re lead to wonder: what am I to do with these flowers? Who lies under those gravestones? How did these pigs build houses? What’s poisonous, and what provides me with much needed stamina? Who roams this place at night? Where did that turkey come from? Who is Maxwell, anyway?

In a randomly-generated world, the questions are, thankfully, endless. The only real guiding hand in Don’t Starve is the interface, which includes a sidebar of items such as tools, weapons, structures and more at the ready for desperate fingers. Hovering over an item such as an axe will brief you on the materials needed to construct one. Finding the item you’d like to build, obtaining materials, and then constructing the item with a single click is a refined process. Actually knowing which items to craft is a gradual manifestation of instinct — the way you adapt, the way you are educated about the rules of Don’t Starve is smoothly lathered onto your consciousness. Klei have mastered that elusive quality of “emergence.” 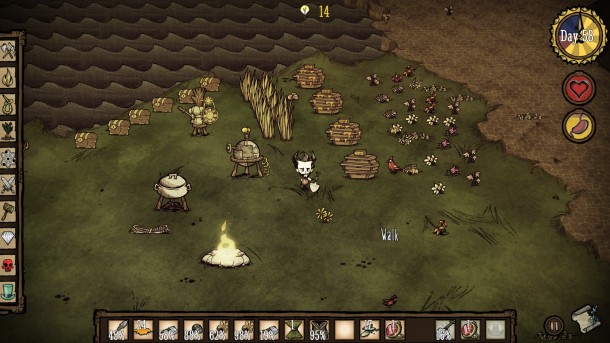 Always present is the cycle of “Day,” “Dusk,” and “Night,” which creates an entertaining sort of anxiety. It’s best to get the most out of your day, whether by garnering as many resources as possible for future creations, or by maintaining your sanity, hunger, and health meters. Soon enough, an auburn glow will emanate from the sky above, along with the suggestion that you build a fire. Within a limited time frame, you either build a fire from resources already gathered, or you embark on a frantic hunt to find adequate materials in time. Ignoring both of these routes will likely doom you — once the environment is sunken in total darkness, floating, malevolent eyes will approach with frightening confidence and strike until your death. Cue the total eradication of your progress in the game, leaving you with the sole option to start over. You may return to any moment, of course, through a a fine save system, but death is ultimately an end-all. By featuring this kind of punishment, an overwhelming feeling of management takes over. Don’t Starve almost operates like a machine meant to be maintained.

While the merciless terminations of your sessions inspire superb tension throughout, it’s hard to suppress the thought that I’ll never find the success that other players have. I’ve see many fortress-like structures on the web, things that feel far and away from what I’m able to create under the conditions, and that’s disheartening. But I wonder — would Don’t Starve be Don’t Starve without the searing difficulty? Is that not part of its threading, its identity?

Evading death long enough may seem like its own reward, but an XP system allows the unlocking of characters who alter gameplay quite significantly. Willow, for example, is a pyromaniac notable for her trusty lighter. That simple feature eliminates the preemptive gathering of materials needed for fire-making. Some characters are included for added difficulty, but all are here for our delight. Don’t Starve is remarkably charming through its quirky writing and overall wrapping of humor. Each and every character is exquisitely churned through the minds of the obviously clever people at Klei, and its one more example of their unwavering passion for game-making. 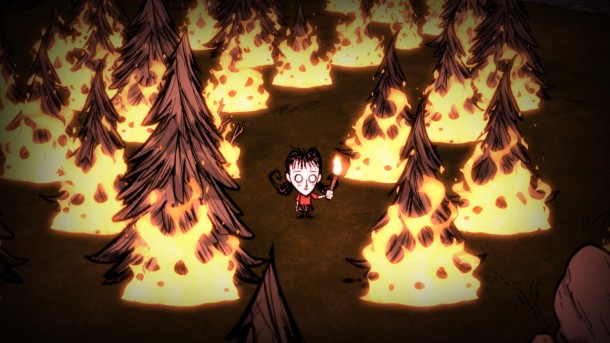 Also noteworthy is the sound design, a speciality of Klei’s when you consider Mark of the Ninja. While playing, one should cease their hurried scramble from one place to another so as to relish the low whirs of the wind or the chirps of birds. The game is also punctuated by an accordion-heavy soundtrack which further complements its whimsical nature. The short musical interludes that accompany a character’s snarky observation are quite enjoyable, and it’s simple moments like these that not only made my experience with Don’t Starve a more positive one, but are sure to bring me back for more.

Time is of the essence with this one, for the longer you survive, the more you’ll prosper and advance in its world. Perhaps, like other players, I’ll develop a hub close enough to working status that I can stand firm in my claims to others that I did not, in fact, starve. Klei’s latest is a keenly-designed offering, a great one. This is one of 2013’s best games — while I hope to see more like it in the near future, I am doubtful that another game would be able to match the stark uniquity and wonder of Don’t Starve.

This review is based on a version of the game purchased by the reviewer.

Andrew is an Editor at SideQuesting, and can often be found soaking in the warm glow of televisions, monitors, and other things with screens. In addition to his voracious appetite for video games, Andrew is also a fierce lover of the cinema. These sentences were freshly manufactured from his Denver home. Andrew can be found on Twitter @andrew_tennison.