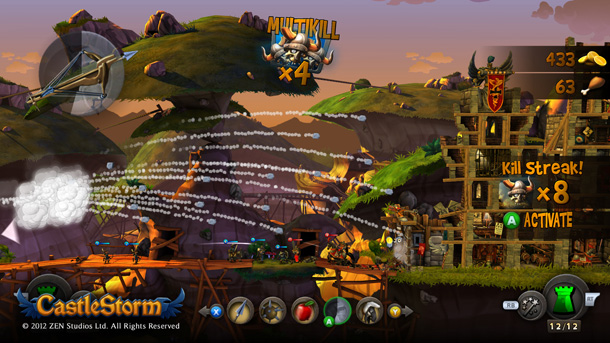 Combining video game mechanics from various genres has become a common practice in modern game design for years now, but it’s difficult to get right. I once experienced this when I sat down with two of my junior Astronomy students on senior cut day, staring at my whiteboard full of gaming genres, trying to come up with an interesting combination of two genres that would make a good game. After talking about whether a FPS 2D fighter would work well for awhile, I’ve come to realize that it’s hard!

Castlestorm has seemed to accomplish this with ease and with a multitude of borrowed mechanics from different genres to boot.  In short, Castlestorm a tower defense, physics-based canon game with RPG and 2D side-scrolling mechanics.  That’s quite a mouthful, but it pulls it off very competently. 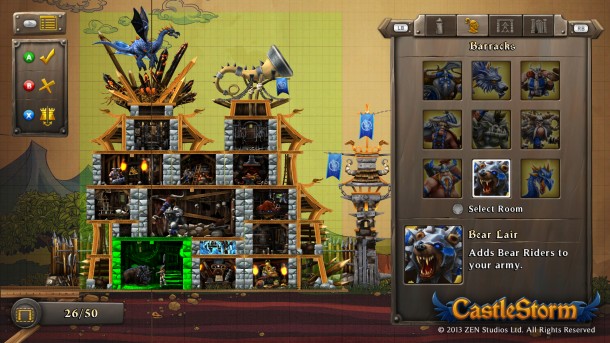 Each battle in Castlestorm consists of a 2d environment with your castle on one side and an enemy castle on the other. Your castle is customizable and each room you include will give you certain abilities and perks. Certain rooms can arm you with specific types of troops and others can give you perks like giving you extra gold (to purchase and upgrade abilities and soldiers), improving cool-down time for weapons, and increasing castle wall strength.

The battle occurs between the two castles. Armed with a ballista, you can attack with various projectiles that will have varying ranges, strengths, and effects to take out enemy troops and castle structures. You can also call your own troops into the fray to help complete any objective – be it destroy enemy castle rooms, capture flags, or getting a certain number of people to a point in the map. Spells can also be cast when things get too hot to help clear out the battle field. One interesting spell actually turns the game into a 2d side-scroller for a moment when your character is summoned to the battlefield to take on any enemy troops with his sword and arrows. 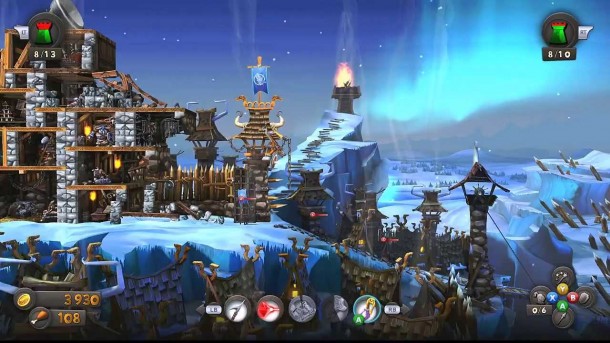 Toggling between aiming the ballista, summoning troops, and using spells to take out enemies or attack their castle is a pretty good juggling act, but the game does a good job of getting you to the point of using all three at once in the opening acts of the game. When I got to the point where I felt comfortable with all three, I found that the game really did a nice job of keeping my brain and fingers moving.

While Castlestorm is successful in combining these different gameplay elements, I found that it’s not without its imperfections. One big one is that the campaign is not without its difficulty spikes. There were a few times where I felt like I hit a wall and had to give certain missions a try over and over again after multiple failures, resulting in some frustration. This could have been worse had I just sat and toiled over each mission, but I played Castlestorm a bit casually. I’d often start a game session with a few missions of Castlestorm just to get my fingers warmed up and then pop another game in to give my mind a rest.

The game is probably best played this way. 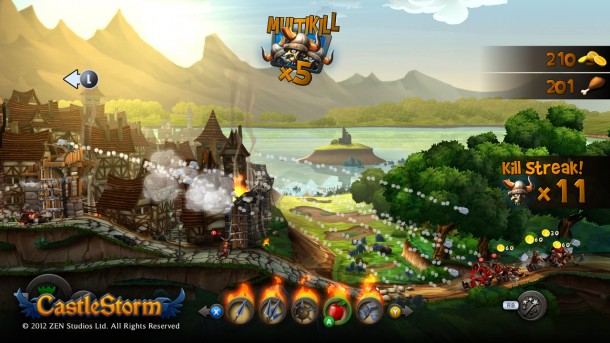 Armed with catchy soundtrack and adorable character design and story, Castlestorm is a great experience to squeeze in before big titles, and I’d easily recommend this for a casual play. It’s an excellent distraction from core experiences that will keep your mind and fingers on their toes in the context of popular mechanics from various gaming genres. Considering how many different gameplay elements were borrowed from different genres, they’re woven together beautifully in this experience.

This review is based on a retail code sent to SideQuesting by the publisher for the Xbox 360 version.