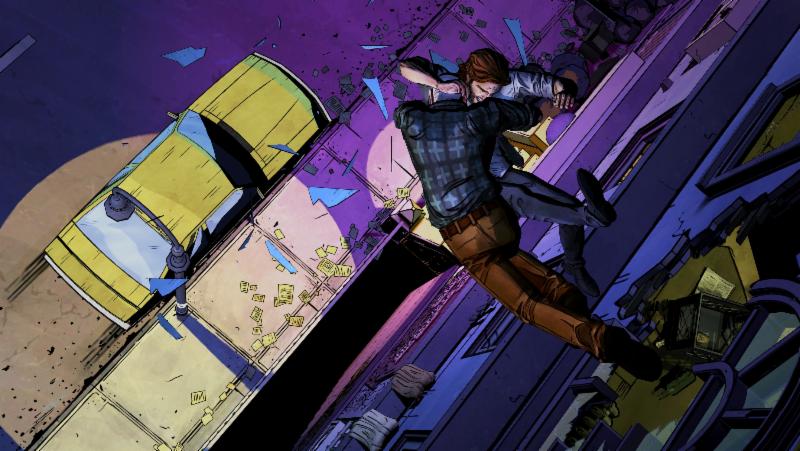 The first season of Telltale Games’ The Walking Dead was a triumph of adventure game design. It pushed forward the basic ideas of the genre, while blending in some of the better aspects of “cinematic” games like Mass Effect without the abstraction of mediocre gunplay.

The Wolf Among Us isn’t the same kind of paradigm shift that The Walking Dead was. Most people will probably tell you that, and imply that because this new episodic saga – based on the DC Vertigo comic Fables by Bill Willingham – isn’t as “important” or “surprising.”

Fine, it’s neither of those things. What it is, instead, is a fantastic commentary on Telltale’s own newfound formula that carries itself with more confidence and verve than its predecessor.

The Wolf Among Us is a prequel. While the aforementioned comic book primarily takes place in contemporary New York City, this first episode is set during the1980s. It’s wrapped around the idea of all the fables from children’s books evacuating their homes, and coming to live in the human world.

In the game, just like the comic, you play as Sherriff Bigby Wolf (three guesses as to which fairy tale character he is).  Since Bigby is an established character, unlike than The Walking Dead’s Lee Everett, the illusion of control over the character is slightly less affecting.

Lee’s purpose and choices throughout his adventure were ultimately diversions on a fixed track, but knowing that he wasn’t beholden to existing fiction meant you thought about it less. Bigby, on the other hand, already has a personality. As the player, your primary influence on his conversations is in determining degrees of gruffness for the huff-and-puffer.

It’s difficult to say what impact your decisions will have, seeing as this is only the first of five episodes. The “next time on…” sting before the credits provides some inkling, but the proof, as they say, will be in the pudding (isn’t there a fairy tale about pudding?)

What section of the story we do get in the first episode are superficially different from The Walking Dead, but ultimately similar upon deeper inspection. That’s not a bad thing, either. 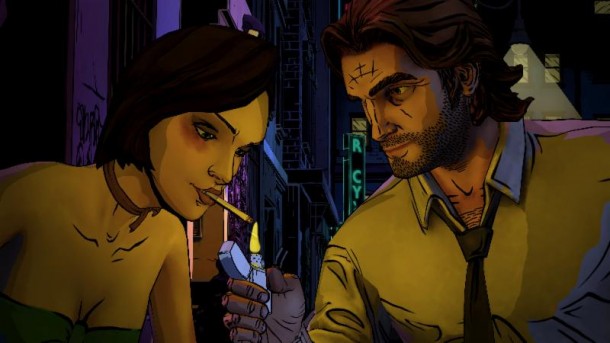 As sheriff of Fabletown, Bigby doesn’t have to worry about the end of the world. The fables’ world ended a long, long time ago. It’s his job to keep the survivors from killing each other, or bring them to justice when that’s no longer an option. In this case, it’s the latter. The Wolf Among Us is equal parts modern-day western and noir murder mystery, with a take-charge lawman dropped into the neon-splashed Dirty Eighties. The citizens of Fabletown don’t like Bigby – that comes with the territory of being the face of the law that breathes down their necks – but they also fear him. More than that, they want their fears justified so that at least some symbol of order from their old world might stand.

This is never more apparent than towards the end of the first episode, which finds Bigby tracking down a suspect inside a bar. The results aren’t pretty, and culminate in a brutal knock-down-drag-out action scene that shows just how far Telltale has come in terms of delivering action sequences in the adventure game engine. By the end of it, you can choose to affirm the fears of the witnesses – to accept the burden of being their monstrous “symbol” – or you can walk away. 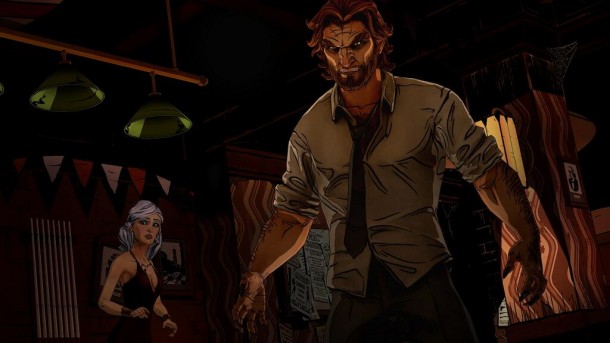 Thanks to the diamond-like convergence of branching stories in Telltale games, and the nature of prequels, Bigby remains an object of scorn. Unlike Clementine, however, the Big Bad Wolf can decide for himself just how much he’ll live up to expectations.

If future episodes of The Wolf Among Us nurture these ideas, Telltale Games will have found an incredible way of not only following up but dissecting their previous successes.

Ironically, The Wolf Among Us has set great expectations for itself to live up to in future episodes.

This review is based on a season pass provided by the publisher.