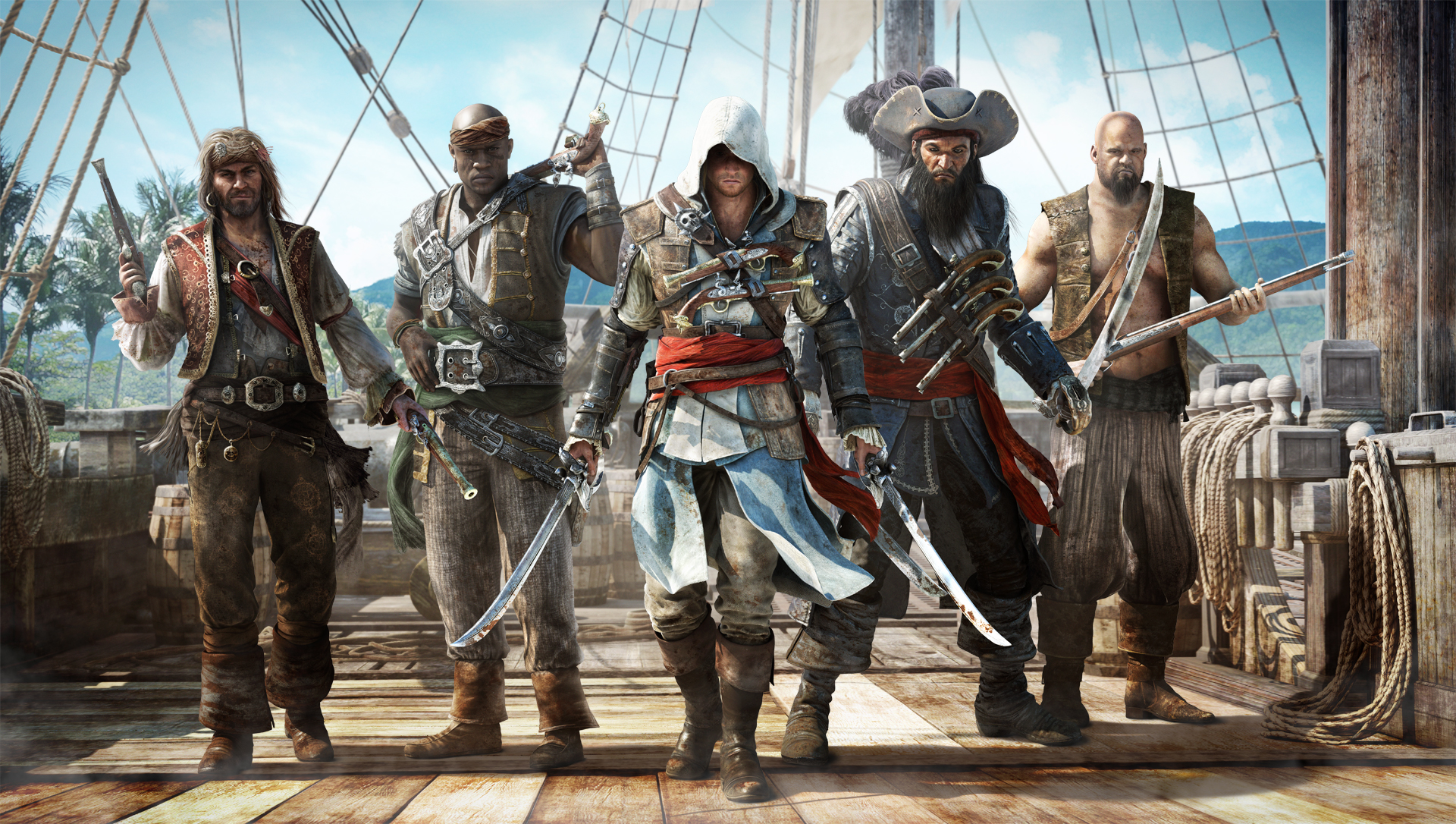 Assassin’s Creed has always been a series about balance. The titular assassins balance precariously on wooden beams, rooftops, and ledges as they pursue their latest target. They perch atop towering buildings to get the lay of the land before diving off in a leap of faith.

With the release of Assassin’s Creed IV: Black Flag, it seems as though Ubisoft has, at last, learned from the example of their assassins. The sixth major release in their series marks a conceptual leap of faith. It immerses players in the golden age of piracy—the early eighteenth century—and so combines the seemingly disparate worlds of pirates and assassins. As a result of this gamble, Black Flag comes with a greater sense of balance and cohesion than other recent entries in the franchise. The more horizontal motions of city freerunning have seamlessly converged with the tree climbing, frontier-style gameplay of Assassin’s Creed III. Most missions offer equal opportunities for both combat-oriented and stealthy players alike, and features like enemy tagging ensure that the stealth mechanics are at their finest. 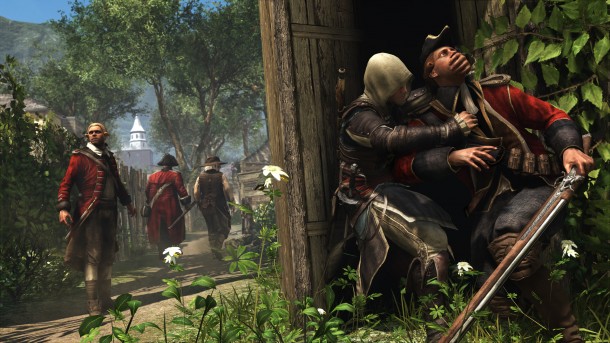 The opening act of the game exhibits a degree of self-awareness as readily as it introduces players to the world of piracy. My first encounter with Edward Kenway, a former privateer and budding pirate, called for me to literally take the wheel to pilot a ship under siege. Once the game’s early cannon fodder was soundly defeated, an explosion flung Edward overboard, forcing him to swim to a nearby beach in order to survive. A man from the opposing ship also made it to shore. With a laugh, Edward gamely asked his companion a question which could have just as easily been directed at me: “Was it good for you as well?”

The question indirectly gestures to what Ubisoft already knows (and what new players will soon discover): Black Flag is good. As a pirate game, it’s great.

Though many of the mechanics from Assassin’s Creed III have carried over into Black Flag, they are integrated in a more smooth and polished fashion. Naval combat, as the game’s action-packed opening emphasizes, is the best illustration of such borrowing and refinement. These battles are remarkably fast, brutal, and streamlined. Transitioning between weapons is as simple as rotating the camera angle, and the degree of customization available for the Jackdaw—Edward’s brig and the player’s key to exploration—allows the vessel to be finely tailored to the player’s preference. Conversely, open combat can be skipped altogether. It is easy for Edward to slip into the water, climb aboard another vessel, and stealthily kill its crew, leaving it ripe for the plundering. 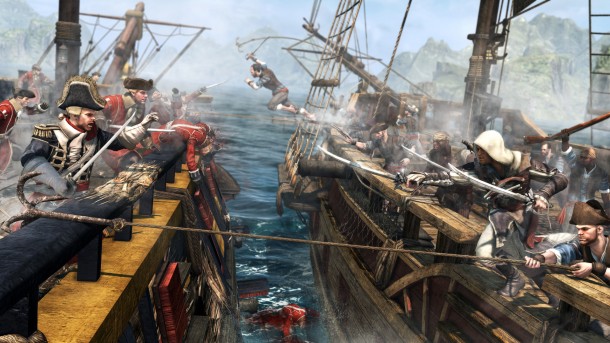 Basic combat remains largely the same, and it still relies heavily on countering and maintaining kill-streaks. Thankfully, Ubisoft has scaled up the combat’s overall difficulty. Enemies deal more damage if they successfully land a hit, and certain foes are completely immune to specific tactics. Some situations call for Edward to break through an enemy’s defense to successfully kill them, but attempting to do the same with ship captains will net him a sharp backhand across the jaw.  This means that stealthily boarding a ship guarantees victory no more than openly engaging it in combat, resulting in a remarkably balanced combat system. Black Flag has no trouble finding sure footing on the thin line between stealth and open combat gameplay styles.

True to form, exploration continues to play a central role in the series. Though the usual viewpoints and location discovery aspects have returned, Black Flag’s setting feels entirely new. The Carribean Islands are as much of a character as the pirates who occupy them, and the lush scenery and huge world map beg players to uncover their secrets. The three main cities—Havana, Nassau, and Kingston—serve as focal points for story-based missions, assassin contracts, and some collectibles. Alluring as the cities are, it is hard not to become more enamored with the emerald waves and the promise of the horizon beyond them. The sea is the player’s oyster, offering up bountiful treasure to those bold enough to skip the fast travel option.  Regardless of whether I was sailing towards a storyline objective, fighting (and boarding) other vessels, taking over an enemy fort, or exploring a shipwreck with the diving bell, I found myself mesmerized by the sheer variety of things to do. The rolling waves themselves are rendered so beautifully that I could practically taste the salt in the air. 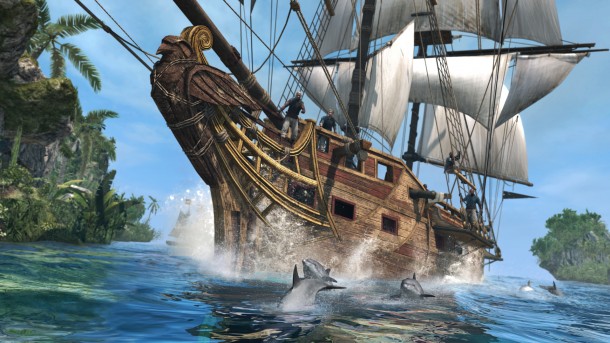 Those waters also conceal some dangerous (and worthwhile) secrets. Legendary ships drift along strange tides, each posing a monstrous threat with a unique set of skills akin to a boss fight. I found that these vessels refused to go down without an intense fight, even with a heavily upgraded Jackdaw. In addition to these fearsome foes, community discoveries—such as bounty-filled convoys and blatantly referential white whales—appear at random on the map. Discovery of any of these features is immediately shared with your friends  through Uplay. And  therein lies the catch: players without an Uplay passport and Internet connection can’t find these items, and they will not see the events that their friends discovered on their in-game map. That being said, the ability to discover and automatically share the location of valuable items with friends lends a sense of community to the game.

Despite the game’s ability to balance an impressive array of features, long-time fans may be perplexed by how long it takes the story to pick up in earnest. The usual clash of Assassins and Templars steps aside to allow Edward Kenway to take the helm. It is his greed—and his desire for the ultimate treasure—that allows him to interact with both factions in a manner that is unique to any game in the franchise. Edward’s dynamic character development grants him solid footing among the series’ other memorable protagonists. At first, it’s difficult to imagine that the brash, greedy pirate could ever be an assassin; by the last leg of the game, it’s impossible to imagine him as anything else.

The story may take some investment on the part of the player, but the gameplay itself opens up a few hours in. Some of the features, such as the assassin contracts and puzzles, are around long before the game bothers to explain them. Edward inexplicably moves and fights like an assassin well before he adopts their creed.  Other features—like the diving bell and some Jackdaw upgrades—still take several additional hours to unlock. In brief, Black Flag offers a veritable treasure trove of ideas for the series’ gameplay, but it struggles to smoothly incorporate these mechanics into the story itself. 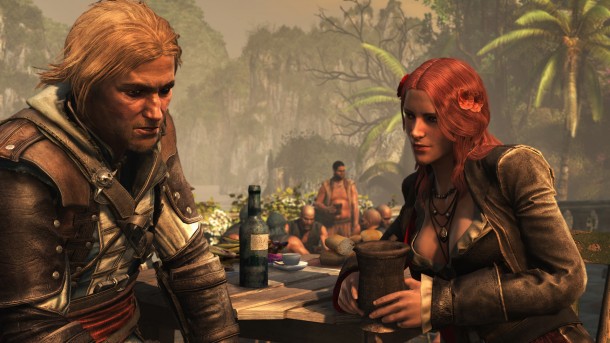 This issue carries over into the modern-day storyline, which transfers players from Edward’s shoes into a voiceless, first-person perspective. As a new employee at Abstergo Entertainment, I found myself trudging from waypoint to waypoint, completing tasks without a sense of who I was meant to be. Despite this, it was strikingly clear what I was meant to do: hack consoles, complete their minigames, and unravel the villainous corporation’s latest scheme. Abstergo’s headquarters holds even more collectibles too—this time in the form of decorative figures or ominous sticky note messages.  Overall, the modern-day gameplay feels remarkably linear and unbalanced, especially when presented as the frame for Edward’s story and its limitless possibilities.

As a whole, Assassin’s Creed IV: Black Flag marks a resounding return to the series’ old vigor and livelihood, and it is easily the most solid entry in the series since Assassin’s Creed II. Its stunning setting inspires a sense of wonderment and immersion, and the variety of features ensures that all players will find something that appeals to them. The gameplay treads confidently along the lines between open and stealth combat, land and sea traversal, and core missions and side quests.  There are some areas in which Black Flag still struggles to find sure footing, namely when it comes to seamlessly incorporating all of its features into the story. Even then, it never teeters enough to fall off its perch atop the other fall releases.  With its release on next-gen consoles imminent, Black Flag is a nearly perfect entry upon which to sail into that unknown horizon.

This review is based on a retail copy of the game for Xbox 360 that was purchased by the author.