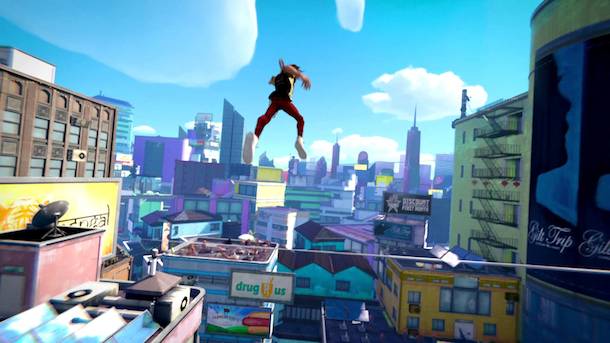 Insomniac Games is finally letting us peer behind the curtain just a bit to show the first gameplay footage of the upcoming XBOX One-exclusive action shooter, Sunset Overdrive.

In the four-minute video posted over on the official XBOX YouTube channel, we get to take a look at the game’s wild array of weapons and enemies that the studio has become known for, as well as some absurdly fast and fluid looking traversal and combat mechanics that come into play as you make your way through the city. We also get a look at “Amps,” Sunset Overdrive’s player and weapon modifications.

In the blog post accompanying the video, Microsoft detailed the bonuses that come packed in with the game’s “Day One Edition.” Among said bonuses are the “Nothin’ but the Hits” gun, an overcharged version the vinyl-launching “High Fidelity” gun that will deal increased damage; the “It’s Me! Fizzie!” outfit, which lets you dress as FizzCo’s mascot; and the “Hardcore! Hammer,” which consists of a hammer crafted from a bat and spiked dumbbells.

It’s a great first look at how the game works, for sure, but here’s looking to the future hoping we see a lot more at E3 in a few weeks.