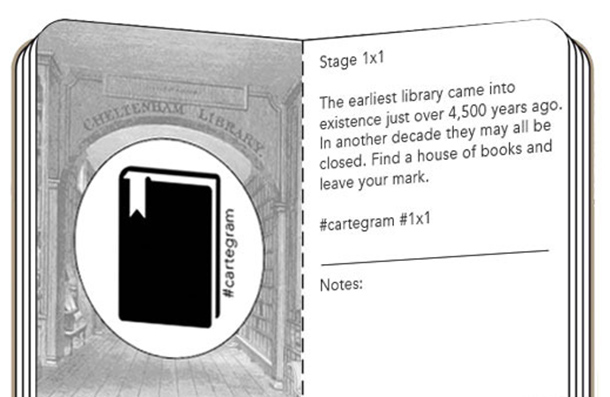 Tired of just using Instagram to take photos of food, sunsets, and your puppy? Probably not, I’d guess, but at least now you can do more with photos from the app courtesy of a novel new game.

Cartegram, created by Len Kendall, one of the minds behind CentUp, creates a metagame out of Instagram photos.

Players are given a special notebook and collection of stickers. Each page represents a vague “task” or “mission”, which usually involves seeking out something or someone. Once that “thing” is found, the players tag it with a biodegradable sticker and take a photo with Instagram, using an associated hashtag.

That’s essentially it. The notebooks, known as “volumes”, represent a season of the game. Players are encouraged to view the progress of others by searching for the respective hashtags and photos. It’s a simple idea, and one that can put a fun spin on the photos that we take by asking us to keep our eyes open to our environments and piquing our interest to explore. It’s an interesting spin on the modern scavenger hunt.

It’s a creative solution to the often boredom of pocket photography, giving us mini-missions and asking us to be a little creative at the same time. If anything, it could be a blast to take one of the volumes with us while we’re traveling, as a sort of of tasked book of memories.

Cartegram has already surpassed its funding goal, and is planning on at least three seasons of the game.

Fund it via Kickstarter