Last Tuesday, Ubisoft unveiled Assassin’s Creed Syndicate, the next entry in their flagship series. Syndicate will revolve around the lives of Jacob and Evie Frye, whose story unfolds during the Industrial Revolution in Victorian London. The reveal included both a trailer and a gameplay demo which offer a tantalizing glimpse into Syndicate’s setting and mechanics. There’s a lot to be gleaned from both videos for those who are willing to take a close look.

Back when Syndicate’s setting was first leaked, I wrote an introduction to Victorian England in order to revel in the setting’s potential. Now that Ubisoft has provided more details, it’s possible to take a far closer look at the pertinent history that will make nineteenth-century London a rich (and exciting) setting for the series.

As the trailer points out, the Industrial Revolution was borne on the backs of impoverished laborers. In August 1834, the Poor Law Amendment Act was passed, which saw the construction of several workhouses across England and Wales. Living conditions were absolutely dismal within these workhouses. Laborers were segregated in order to prevent the poor from “breeding,” so married couples, parents and children, or even siblings were not allowed to see one another. There were too many people stuffed within narrow, barracks-like dormitories. The work was grueling and tedious labor including mill-work, stone-breaking, or domestic work for women. Tasteless and scarce rations meant that all inmates were slowly starving or malnourished. Children were often sold into labor contracts and examined by factory managers like cattle.

While workhouses may make an appearance in Syndicate, the trailers and promotional material suggest that the game will focus more on the London slums. A major indicator of this is the chosen name for Jacob and Evie’s gang “The Rooks.”  While the name harkens back to Assassin’s Creed’s avian interests, it is also a nod to the contemporary colloquialism for London slums. These poorly constructed dwellings were often called “rookeries” in reference to the nesting habits of rooks, which roost in densely populated groups.

Rookeries are the direct result of rapid urbanization and industrialization, which caused the London population to boom. By 1861 (just seven years before the game takes place), over three million people lived in Greater London. This population forced the impoverished to live like rooks, occupying every nook and cranny available throughout London. While East London was often referred to as “darkest London” for its concentrated poor population, these rookeries were, in fact, scattered throughout the city. At times, even the wealthiest of districts were right next door to a crowded rookery.

Despite the negative reputation of slums, crime did run rampant in Victorian London. Gangs were common too, as Syndicate suggests. The phrase “Hooliganism” came to describe gang-related activities in London during the late nineteenth-century; this is directly derivative of one of the predominant gangs in south London called the Hooligan Boys, who ruled during the century’s last decade.  Another gang, the Swell Mob, exhibits the typical behavior of Victorian gangs—and they’re closer to Jacob and Evie’s time in London. Blackwoods Magazine (1841) describes these boys as dressing the in the height of Cockney fashion, puffing cigars, and seemingly genteel by disposition. If the trailer is any indication, the gangs of Assassin’s Creed will dress with a similar stylistic flourish, which grounds Jacob’s transition from hood to top hat in a historical context.

The nature of the most common crimes meshes nicely with the series’ typical gameplay. Theft was a pressing concern for the Victorian populace, and criminals’ tactics were both refined and dangerous. A gentleman’s hat might be pulled over his face to make him easy prey, or he may just as easily be lured into an alleyway by a prostitute (a gameplay distraction frequently seen in previous Assassin’s Creed titles). The tools of these hooligans grew increasingly advanced as well. A rag doused in chloroform helped subdue a hapless victims. Garroting was increasingly common, for it allowed a group of thieves to restrain a target from behind while searching their mark’s pockets for valuables. If controlling a gang syndicate will play a central role in Assassin’s Creed, then it’s reasonable to expect similar enactments of hooliganism within the gameplay.

When discussing London’s Underworld and its notorious East End, it’s hard not to reference Jack the Ripper or the Whitechapel Murders.  These murders in Whitechapel took place between April 3, 1888 and Febrary 13th, 1891. There were 11 murders total, all women, though only five were directly connected to Jack the Ripper.  These homicides are frequently referred to as the first example of a serial killer in history, but this is a common misconception. Body snatchers Burke and Hare murdered 16 victims in 1828, and other historians believe that Martin Dumollard, a Frenchman, was the first serial killer prior to his execution in 1862.  So, the Whitechapel Murders did not earn such global infamy on account of their novelty. Instead, they became famous for the grisly, sexual nature of the murders (which often focused on the mutilation of genitals) and how the murders occurred over a short period of time in a localized region.

While the date in the trailer sets Syndicate in 1868 (twenty years prior to the grisly murders), previous games have covered a significant portion of their titular assassins’ lives.  So, it’s entirely possible that Syndicate will touch on this dark and grisly facet of London’s history. The desire to see the Whitechapel Murders depicted in Syndicate most likely stems from the hope of actually apprehending the murderer(s) behind the crimes. Indeed, while there are many theories about potential suspects, the exact identify of Jack the Ripper was never discovered and most likely will never be.  If this is included in the game, hopefully the nature of the murders themselves will not be sensationalized.

Where there is crime discussed in a Victorian setting, inevitably talks of Sherlock Holmes follows. Indeed, hopeful fans have fantasized about Jacob and Evie Frye working in tandem with Sir Arthur Conan Doyle (the author of the great sleuth). If Dr. Jekyl and Mr. Hyde created paranoia about respectable men’s propensity to turn into a murderous tyrant, then Sherlock Holmes soothed that paranoia by asserting that even the most impossible crime could be solved by merit of observation and clever deductions. Holmes was the first to use ballistics, toxicology tests, gait analysis, fingerprint evidence, and document analysis to solve crimes. Many of Holmes’ methods were ahead of their time, and many are still used to this day.

While hopes of encountering Sir Arthur Conan Doyle are understandable given Holmes’ prestigious claim to fame, the Sherlock Holmes stories were written between 1887 and 1927, decades after the initial setting of Syndicate. Unless the game will span a long period of time, involving Sir Arthur Conan Doyle and Sherlock Holmes may be difficult—and not just because of timing. The relationship between creation and creator was not always a positive one. After claiming that Holmes “takes his mind from better things,” Doyle killed off both Holmes and Moriarty—his nemesis—in “The Final Problem.” Public outcry made him return to Holmes. Similarly, he attempted to dissuade his publishers from requesting more stories by demanding more money for them. This ploy did not work, though it did result in Doyle being among the best-paid authors.

Doyle did come to resemble his creation in surprising ways despite his ambivalent attitude toward Holmes. Famously, in the early 1900’s, he helped clear a man of murder charges by employing some of Holmes’ deduction skills.  The murder of Marion Gilchrist certainly seemed like something from one of his detective stories: a murder, a missing diamond broach, and no sign of a forced entry at the crime scene. While police quickly identified petty crook Oscar Slater as a suspect, Conan’s astute eye for detail and use of paper documents as evidence cleared Slater of the murder charges. Because of this, it may not be entirely unreasonable to hope that the Fryes and Doyle partake in some co-operative sleuth-work. 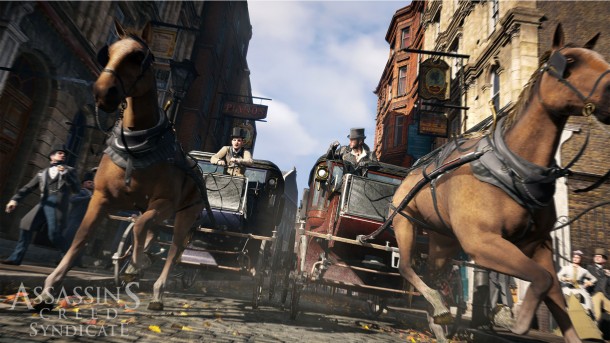 It’s easy to get wrapped up in the glamour of Victorian London. It was the peak of the British Empire and a time of technological and literary innovation, but all that glitters is not gold. Those living in poverty were subjected to inhumane treatment, wretched living conditions, and accused of engaging in deviant behavior. Crime was rampant in a time that lacked detective technology. For this reason, choosing to focus on London’s Underground is a smart and unexpected move for Assassin’s Creed Syndicate.  It will, no doubt, allow for a more complete and honest portrayal of the period than is commonly depicted in other media.