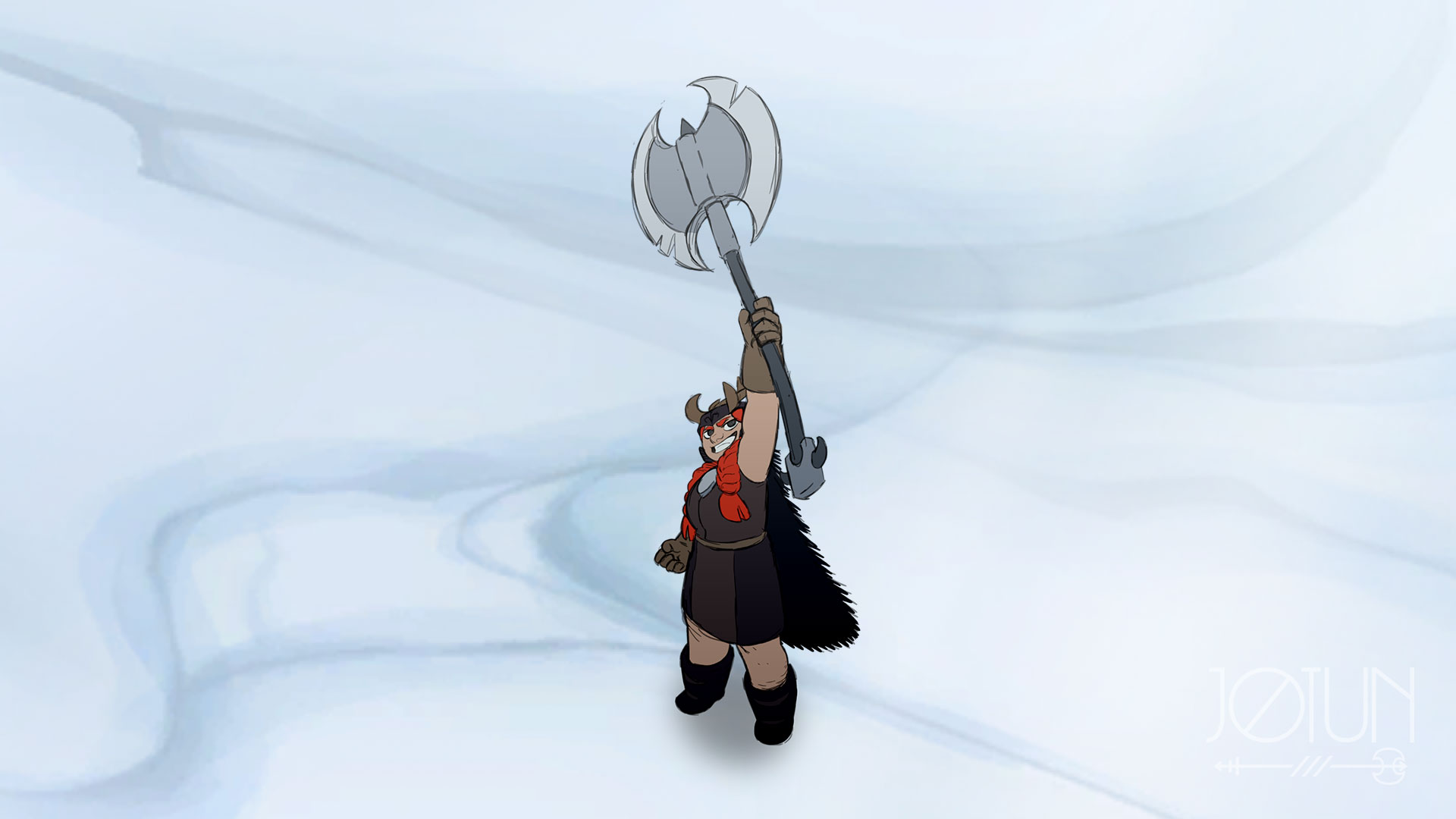 Each time you die in Jotun, a disparaging message appears: “You have failed to impress the Gods.”

I came to hate that message with every fiber of my being, but it would be dishonest of me to claim that Jotun failed to impress me.

Based on Norse mythology, Jotun revolves around the warrior Thora, who has died an inglorious death and must redeem herself in order to enter Valhalla. Her path to redemption hinges on unleashing elemental behemoths called jotuns and slaying them. What appears simple enough in type is far more complicated in action. Gaining the favor of the Norse gods is no small task, and Jotun reminds you of this time and time again with cruel glee.

This past week I had the chance to play through Thunder Lotus Games’ alpha build. Never before has a game filled me with equal parts delight and rage. While it seems to have taken strong cues from the Shadow of the Colossus’s boss-fight gameplay, it just as handily borrows Dark Souls’ frustrating learning curve and difficulty.

For example, the alpha offers little instruction on how to survive Thora’s daunting quest; it simply instructs players to find two runes to unlock the Winter Jotun’s lair. These runes are hidden in disparate sides of the void: one is tucked away in the Nine Rivers of Niflheim and the other is Jormungandr’s Lake. Each landscape is treacherous and deadly, housing secrets that can easily kill unsuspecting wanderers. Unforgiving gusts of wind and the fearsome Jormungandr himself were two of the biggest obstacles that I faced. I survived by the skin of my teeth, impulsively applying what I’d learned about the environment (and the controls) to avoid both wind and serpent maw. 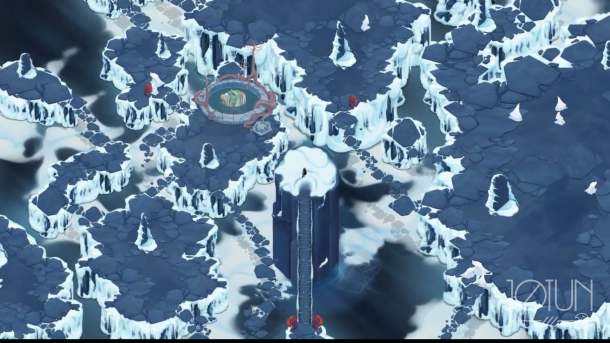 I quickly learned that I was not entirely alone in my quest. When I felt weak, a bit of extra exploring led me to the altars of Freyja and Thor, whom granted me additional abilities. When the bitter winds left my health depleted, I could visit Mimir’s altar and be rejuvenated by his blessing. By the time that I had found the two runes I felt strong and capable—a true seasoned survivor. I even ventured back into each level to ensure that I hadn’t missed any delightful secrets (I had.)

This confidence—and poor Thora herself—were quickly trodden on by giant feet when it was time to face the Winter Jotun Isa. Time and time again, I found myself staring down the continue screen, cursing loudly in frustration but unable to stop trying. Rage and stubbornness became my personal video game deities.

I became better. Whereas at first I felt like Thora’s axe was only bouncing off Isa’s great blue toenails, I soon found myself carving through half of the jotun’s health like a butcher at her block. It was the latter portion of the fight—where things become significantly more complicated—that marked my downfall. But I persisted and watched the jotun’s health drop lower and lower with each attempt.

This steep difficulty is both Jotun’s greatest blessing and its curse. Challenging games are only as fun as they are fair. I am happiest when I can pinpoint my shortcomings and see precisely what allowed the boss to land his final blow. With Jotun, however, I was sometimes confused about what managed to hit me. The zoomed out perspective of the boss fight grants a sense of scale, but it also obscures Thora’s position. This became even more troubling when ice, small obstacles, and blizzards further obscured the playing field.

That said, Jotun would not be nearly as satisfying if it didn’t feel so impossible. Defeating the jotun—who towers over Thora in both size and health bar—requires nearly perfect execution. There is minimal room for error; a full blow from Isa depletes one fourth of Thora’s health bar. Meanwhile, a strong attack from Thora just dents her foe. It’s hard to quantify, exactly, what kept me doggedly pressing forward. It may be that, while I was unleashing massive jotuns, the game similarly set free my inner masochist. Or—a more likely alternative—the world and game are compelling enough to keep me riveted. 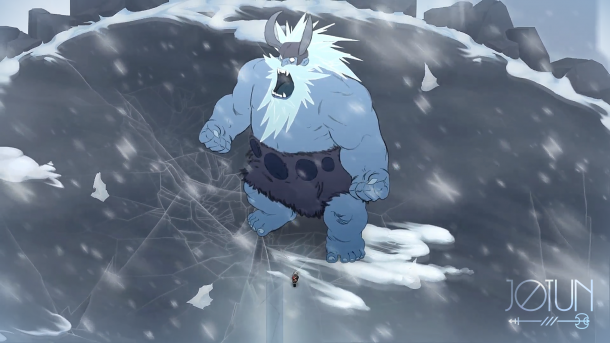 Stepping down from the challenge would feel as though I were disrespecting the sheer amount of effort and thought that has plainly gone into this production. The hand-drawn graphics are gorgeous, and the game often rewards the most intrepid explorers a glimpse at purgatory’s hidden beauty. I was also enamored by Jotun’s interpretation of Norse Mythology and their attention to detail. The god’s blessings, for example, are made possible by Frejya’s cloak of falcon feathers and the legendary hammer Mjolnir.  The final game—which features four additional regions—will delve more into the mythology and Thora’s own story.

When Thora and I succeeded in felling the Winter Jotun, my blood surged with adrenaline and my fingers trembled. For a moment, I sat and stared at the dark screen in disbelief. Then, I found myself immediately thirsting for more—more realms to explore, more jotuns to test my mettle against. What had once been a challenging (and frustrating) crucible immediately became one of the more rewarding experiences that I’ve ever had in a videogame.  I may still have a long way to go before I can impress the gods, but, at this point, I’m pretty committed to the quest.

Jotun is slated for release on Steam in September 2015 for Windows, Mac, and Linux. If you would like to see the game in action, be sure to take a look at our Let’s Quest episode for Jotun.