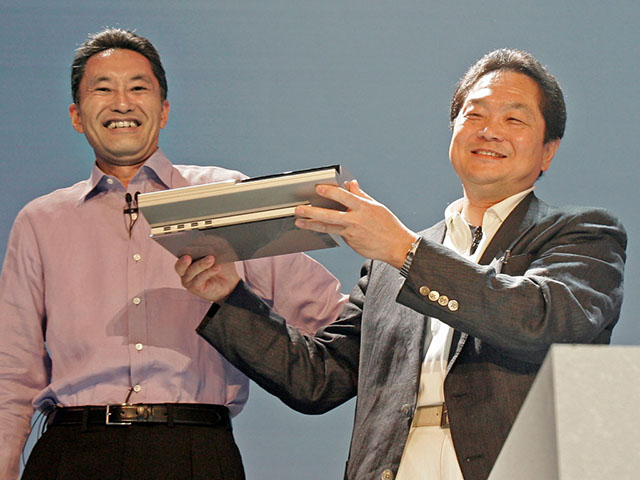 Yesterday we showed you Microsoft’s Xbox press events in the E3 years past, but Sony’s press events go back much further — all the way back to 1995! During that fateful year, the company introduced the PlayStation, and gaming was changed forever.

Follow us through a trek of bad Powerpoint presentations and great stage shows as we relive Sony’s Playstation press conferences on our warpath to E3 2015!

Above you’ll find the 1995 press event that started it all, include “Full Jpeg Video” and “1.5 Million polygons”. Impressive! It was also the first time the company dropped the price microphone. Sega had *just* announced that the Saturn was launching at $399, but Sony took it upon themselves to announce $299 as their price point. Swag!

1996-2003: It’s difficult to find many videos of Sony’s E3 press events during the late Nineties, but we did manage to find a few booth tours and a recap video of the Playstation 2 reveal from the Tokyo Game Show in September of 1999.

1998: A look at the big PlayStation games that were displayed this year.

2001: With the PS2 having had a banner first year, and both Nintendo and Microsoft bringing the heat with their own new consoles, Sony wowed gamers with games like Metal Gear Solid 2 and Devil May Cry.

2004: The year that Sony announced the PSP and directly went up against Nintendo’s handheld dominance. Also: Gran Turismo 4, GTA: San Andreas, and God of War made appearances. Finally, hints about the PS3 were dropped as Sony referenced the work being done with the Cell processor that would power future hardware.

2005: Sony officially reveals the PlayStation 3, including the boomerang controller and Metal Gear Solid 4.

2006: Sony launches the PS3, ushering in BluRay to the world

2007: Gran Turismo 5 and PS Home all make appearances in a game-packed conference

2008: An absolutely adorable Little Big Planet presentation of Sony’s sales numbers is just the tip of this press conference. Resistance 2 shares the stage with Pacific Rift, God of War 3, and Sony’s DC MMO.

2009: Uncharted 2 and Last Guardian blow minds, while the PSP go was leaked days earlier. Watch part 1 below and the full playslist here.

2010: PS Move takes center stage, as does the announcement of PS Plus, but the real show stealer was Kevin Butler, the character created for Sony’s Playstation advertisements that fans loved. Oh, and also PORTAL 2. Part 1 is below, and the full playlist here.

2011: Uncharted 3, Resistance 3, and the PS Vita were the heroes of the press event. Part 1 below, and full playlist here.

2012: With the next generation of consoles imminent, Sony took the wraps off Beyond, The Last of Us, God of War: Ascension, and PlayStation All Stars.

2013: If there is any E3 moment that will remain in people’s minds for years to come, it’s probably the biggest microphone on Earth as Sony announced the PS4’s $399 price just hours after Microsoft announced Xbox’s $499 price. Also: games!