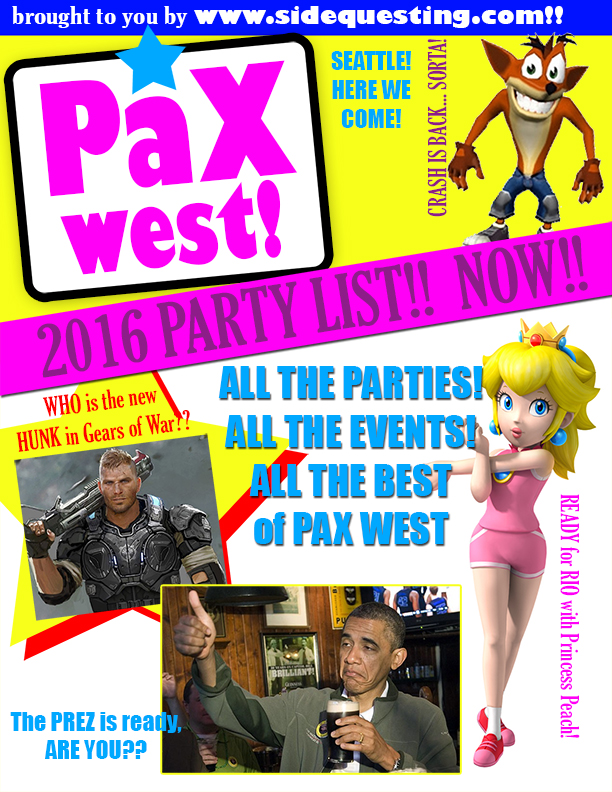 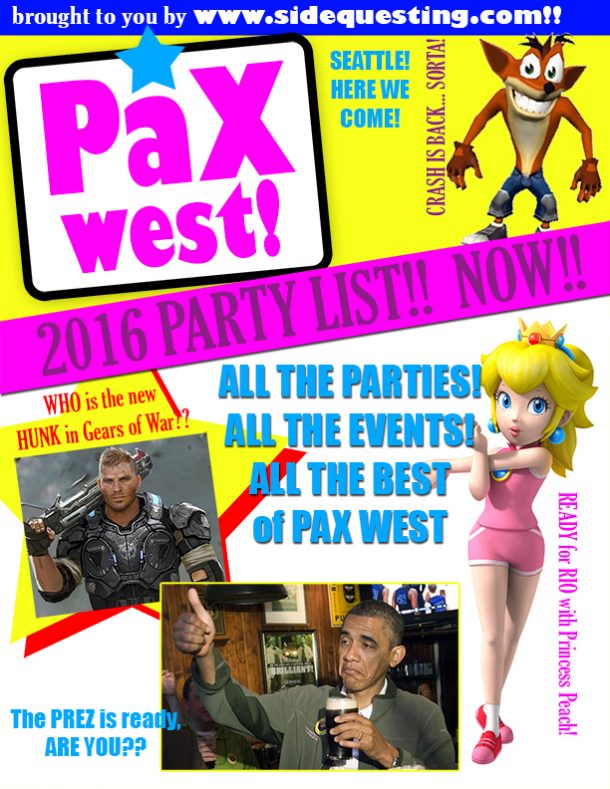 WOOHOO! PAX West is here! The event formally known as PAX and PAX Prime has now been relegated to actually being one of the smaller conferences on the PAX schedule.

But no worries! There are still awesome events happening during the show, and we’re here to fill you in! So sit back, buckle up, and remember to tight roll your stonewashed jeans. We’re friends forever!

If you’d like to PARTNER with us, please feel free to contact us! We want to make sure everyone has a great, safe, party-filled time!

Pre-PAX Boardgame Night
4PM @ Seattle Sheraton 2nd Floor, 1400 6th Ave, Seattle, WA 98101
Entry: Free to all
Info: Penny Arcade Boards | A coordinated meetup the night before PAX for anyone with board games, or anyone who wants to play board games.

Another Castle 2V2 Rocket League Tournament
6-9PM @ Another Castle Video Games, 23303 WA-99, Ste A, Edmonds, Washington 98026
Entry: $15/team, $10/individual
Info: Facebook | We are having a 2 vs 2 rocket league tournament! So grab your partner and get those rocket boosts ready! Dont have a partner? No problem! Head on down anyway and we will match you up with someone to storm the pitch with! There will be CASH prizes for 1st, 2nd, and 3rd place teams! The more teams we have the bigger the pay out, so tell your friends!

Pre-PAX Dinner Night 2016: Start of Term Feast
6PM @ Barça, 1510 11th Ave, Seattle, WA 98122
Entry: $24.68 Eventbrite
Info: The Start-of-Term Feast, formerly the Pre-PAX Dinner, is a yearly, buffet style, catered dinner held at Barça the night before PAX Prime West that gives PAXers, both new and old, a chance to hang out, eat a ton of great food, and get to know each other!

Geek Out! Trivia Night at PAX West
7PM @ Raygun Lounge, 501 E Pine St, Seattle, WA 98122
Info: Facebook | Come join us as we bring the majesty of trivia back to the Raygun Lounge along with our wonderful friends at the Nerdhole! There will fun! And prizes! And alcohol to be consumed! It’ll be the best ever!

Pre-PAX Hookah 2016
7:30-11PM @ Aladdin Hookah Lounge, 1314 Denny Way Suite 101, Seattle, Washington 98109
Info: Facebook | The return of the pre-PAX hookah meet up. Once again will be hosting at Aladdin Hookah Lounge this year. Like last year, all are welcome and anyone without a membership can get one free if you say you are with us.

Monster Hunter Generations 2016 Tour: Seattle
2-8PM @ Unicorn, 1118 E Pike St, Seattle, Washington 98122
Entry: 21 & up
Info: Facebook | Take on Key Quests for chances to win coveted, limited edition prizes. Complete challenges in record time and let glory rain down upon you and your city! Whether you’re a new hunter or a grizzled veteran, there will be activities befitting your level—and some truly monstrous prizes.

Paragon PAX West 2016 Meetup
6-8PM @ Gameworks Seattle, 1511 7th Ave, Seattle, WA 98101
Entry: FREE
Info: Website | Guests planning to attend the meetup should enter off 7th ave and stop by the registration desk to check in and claim your awesome goodies. Whether you’re a Paragon veteran or new to the game, feel free to join us for an awesome time!

GameJolt’s Indie PAX Party!
8PM @ Raygun Lounge, 501 E Pine St, Seattle, WA 98122
RSVP: Eventbrite
Info: Game Jolt brings you the finest Friday night after party of PAX Prime ’16! Featuring a custom themed menu, guest devs and freeplay consoles of some of this year’s hottest indie releases, this is going to be THE event of the season for you to attend.

Karazhan Release Party and PAX PRIME Tournament
2-6PM @ Raygun Lounge, 501 E Pine St, Seattle, WA 98122
Tix: FREE ENTRY
Info: Battle.Net | Come help celebrate Pax Prime and the Karazhan Adventure release on Saturday the 3rd! We will be raffling off prizes all afternoon and will host a hearthstone tournament starting at 2pm (1pm registration begins) where some great Blizzard prizes will be awarded! Watch streamers live, chat with new and old players, theorycraft, show off your cosplay and take a break from walking around the huge convention center to have a drink.

Official Pink Party Prime Pre Party
6-11PM @ Raygun Lounge, 501 E Pine St, Seattle, WA 98122
Info: Capitol Hill’s annual Pink Party (http://pinkpartyprime.com/) is always the PAX event of the season, so we are so proud to yet again be honored with hosting the official Preparty event for it, featuring guests, prizes, and even free passes to the main event itself so come on out while you’re in town and see how the other half lives.

PAX CritterconCrawl
7PM @ Raygun Lounge, 501 E Pine St, Seattle, WA 98122
Info: Seattle’s Critical Role fans (affectionately known as #critters on the streets and in the sheets) are getting together for PAX and have invited you to join them! Rumors of Special Guest appearances abound!

Beers with the Blacklist
7PM @ Elephant & Castle, 1415 5th Ave, Seattle, WA 98101
Tix: FREE for members, 21+
Info: Website | Come join us for a night of beers, snacks, and chatting with your fellow Blacklisters!

Idle Thumbs Wizard Meet 2016
7-10PM @ The Diller Room, 1224 1st Ave, Seattle, WA 98101
Tix: FREE!
Info: Website | What could be better after weeks of watching Nick Breckon drink his souls away than to chill out with fellow Thumbs while sipping an expertly-crafted Zombie?

The NPC Collective Presents: PAX West 2016 Nerdcore Hip Hop Concert!
7:30PM-1AM @ LoFi Seattle, 429 Eastlake Ave E, Seattle, Washington 98109
Tix: FREE with PAX badge, $5 without
Info: Facebook | The NPC Collective (www.npccollective.com) presents a night of Nerdcore Hip Hop at Penny Arcade Expo! A great slate of artists to burn down the microphone while you get your drink and party on.

Pink Party Prime 8
9PM-2AM @ Neumos, 925 E Pike St, Seattle, WA 98122
Tix: $15/21 & up
Info: One of the biggest and most popular PAX & queer events, Pink Party Prime is back at Neumos for its eighth year! A portion of the proceeds from Pink Party Prime 8 will benefit Gay City: Seattle’s LGBTQ Center.

Double Fine Presents: PAX Fan Meetup 2016
6-9PM @ Hard Rock Café Seattle 2nd Floor, 116 Pike St, Seattle, WA 98101
Tix: Open to all (no PAX pass required)
Info: Facebook | This year we’ll have a live Headlander performance from bonafide synth magician David Earl, and Gang Beasts music from the legendary Doseone. We’ll also be unveling a new DF Presents title which you’ll be able to play alongside a Gang Beasts free for all, and if you’re lucky we’ll also have Psychonauts in the Rhombus of Ruin on hand too!

“The Silver Case” PAX Party
9PM @ Barboza, 925 E. Pike St. Seattle, WA 98122
Tix: Open to all (no PAX pass required)
Info: In cooperation with Destructoid. Collectable item: Attendees will be gifted a limited edition original sticker with which they can download the opening track re-arranged by Akira Yamaoka especially for the HD Remaster version of “The Silver Case”.

Rumble for Child’s Play
Daily until 6PM @ PAX West
Info: Facebook | RumbleMonkey invites fans of eSports attending PAX West to visit booth 7311 on the 6th floor and play against seasoned players, for real money. Proceeds won by the RumbleMonkey’s players will be donated to Child’s Play, an organization that works to better the lives of children in domestic violence shelters and hospitals.