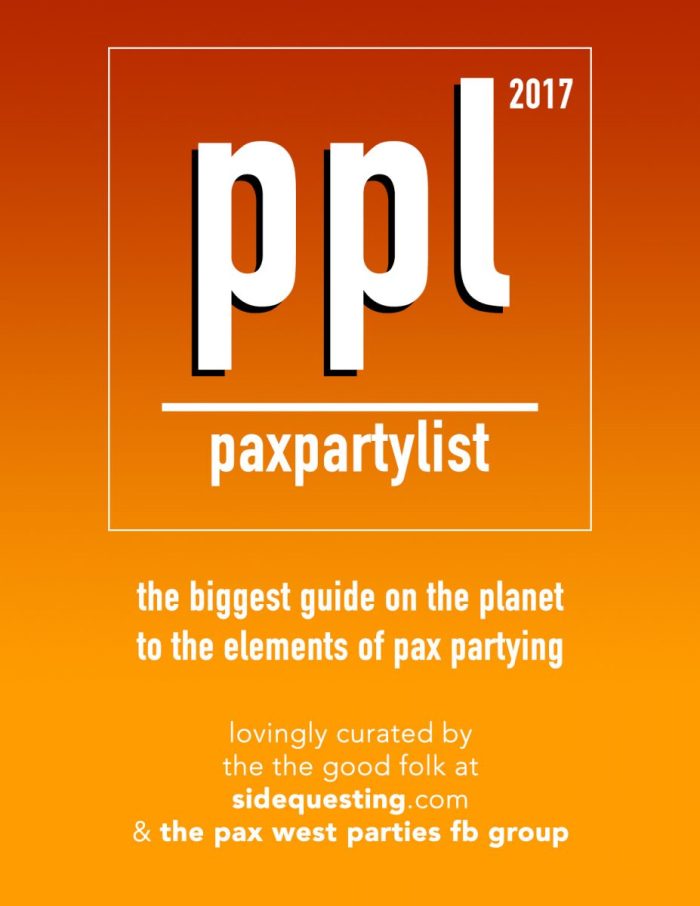 I still have a hard time calling it “PAX West” instead of just PAX or PAX Prime. Whatever. It continues to be a fantastic gathering for gamers and geeks, and everyone else. As usual, we’re here to throw down with ya and post up a bajillion events.

From afterparties, to fundraisers, to meetups, PAX provides some of the best times for the gaming industry. It’s the final big event before the Fall gaming season kicks into gear, and as usual we’re all super excited for it.

The Quest for PAX West: Geek Out! Trivia Night IV – 7:30-11PM @ Raygun Lounge, 501 E Pine St, Seattle, Washington 98122 – RSVP: Free – Info: As geeks converge on the convention center of this quiet town, our intrepid hosts prepare to regale you with queries concerning all manner of media.

Nindies@Night – 8PM-Midnight @ Museum of Pop Culture, 325 5th Ave N, Seattle, WA 98109 – RSVP: Free – Info: Nintendo | The event is open to the public and offers a chance for people interested in speaking to developers and checking out unreleased indie games coming to Nintendo Switch.

The Triwizard Drinking Tournament 2 – 8:30PM @ Capitol Hill, Seattle (See diff routes here) – Register: Free, Eventbrite – Info: PAX Forums | The Triwizard Drinking Tournament is a yearly charity pub crawl hosted by the Penny Arcade community in which the four houses of Hogwarts are split into two teams of fifty and unleashed upon Capitol Hill for a night of merrymaking and fund raising

Hyperkin PAX Meetup – 9PM @ Elephant & Castle, 1415 5th Ave, Seattle, Washington 98101 – RSVP: Free | Google – Info: reddit | We’ll have our SmartBoy and RetroN HD for you all to play, but mostly we want to hang with our fellow con-goers during the “calm before the storm.” First couple of people to show up will get a special gift + some drinks on us!

Life Is Strange: Before The Storm afterparty with What’s Good Games – 6-9PM @ Unicorn, 1118 E Pike St, Seattle, Washington 98122 – RSVP: Free – Info: You’re invited to relax at PAX West 2017 with us and the incredible developers from Deck Nine Games, to celebrate the launch of the first episode of LIFE IS STRANGE: BEFORE THE STORM.