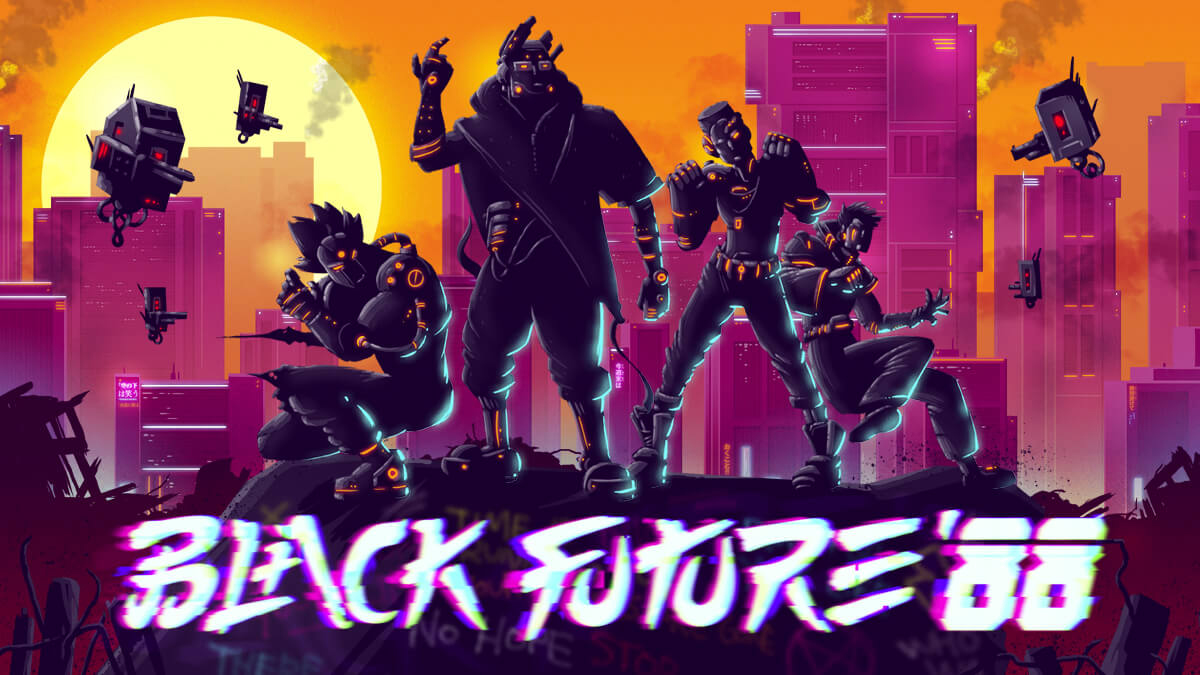 I’ve been playing a lot of games like Control, Witcher 3 and Death Stranding lately, and while they’re phenomenal experiences they also take a lot of my time, which is why it took me so long to pump out this review. Not only are the experiences built upon hours and hours of content, but getting ramped up, getting into the mood, is a process in and of itself. For someone crunched for time, I can’t always afford that. I need something quicker.

Let me rephrase that: by premise it’s only 18 minutes long, but by design it’s infinitely replayable, built upon the premise that if you keep trying, you’ll eventually succeed… or at least get a little further.

Set in a neon cyberpunk version of the Eighties that would make Ridley Scott giddy, BF’88 begins with us charging into the world on a train, hell bent on ascending to the top of a tower before our minimized lifespan of 18 minutes puts a full stop to that. Sure, based on our actions we can prolong our life by a few seconds or minutes here and there, but it’s far more likely that we’ll lose time as we continuously find ways to cut our adventure short.

It’s absurdly enjoyable. The game is built with classic 8/16-bit platforming roots, focusing on hack/slash/shoot mechanics as we run and jump around. It plays loose and fast, but is also simultaneously tight and exact, and the controls are easily understandable. It feels like I’ve played this game before, at least from a control standpoint. The tower itself is a large map broken up into smaller areas, all of which is procedurally generated to ensure that it feels like the world grows and grows and is fresh each time we play. It has a splash of Metroidvania in it, too, and there is a definite direction to head to (thanks to a pointer to guide us) but we can’t help but explore elsewhere, branching off into new areas whenever we find something shiny. There are spots to find ammo and health recharges and dropped weapons everywhere, so it’s no surprise that we *should* be heading up, but we don’t always do that.

Even though the levels are generated, the process for completing the game is the same: get as far as we can, die, learn about why we died and apply that knowledge to the next run no matter how different the world is generated. It’s like learning to ride a bike on cement and then suddenly trekking around on backroads; we don’t relearn to ride a bike, we just take our knowledge and muscle memory and learn to apply it to the new obstacles. It’s not complex, but it’s not devoid of variety either — there’s plenty to do, so much that we’re on always on the edge of being overwhelmed without ever getting there. It’s a great balance.

In BF’88 we’re inconsequential to the world — who knows how many of the denizens brave this tower each day for salvation — but that perfectly piques our nostalgia and harkens back to those arcade platformers of the late Eighties and early Nineties. There’s a lot to love in an experience that’s essentially a death sport. And that keeps me coming back.

Black Future ‘88 is a terrific, must play on the Switch, PC and whatever else it comes to. Now that we’re in delay season, there’s plenty of free minutes to spare.