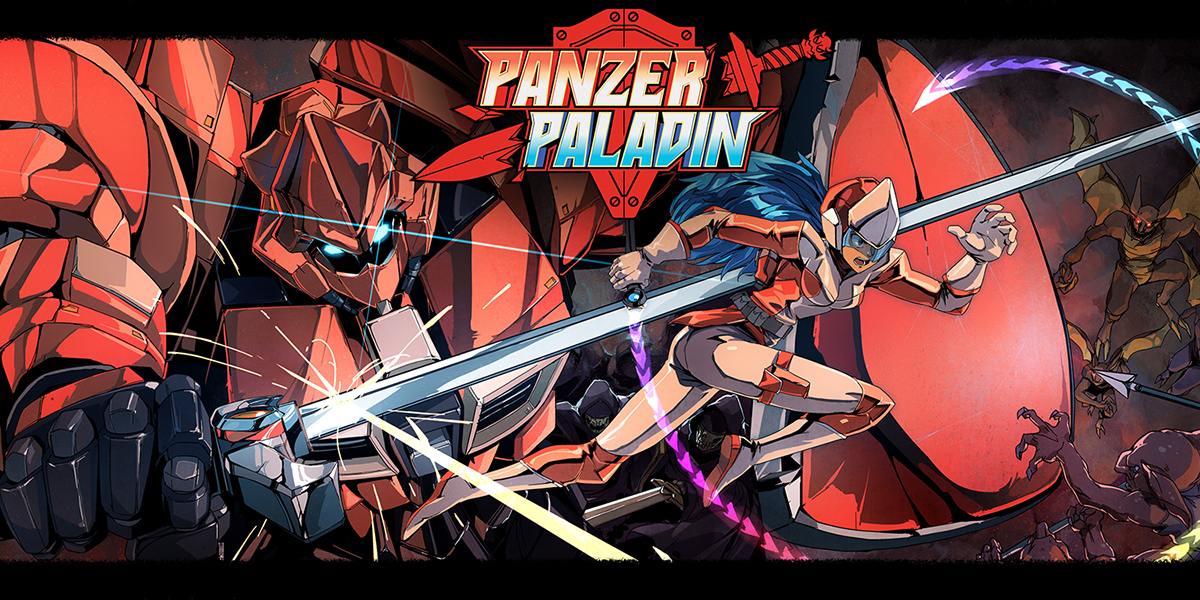 Panzer Paladin is not just full of Eighties tropes, it opts to live in the era instead — and it works

That 80s/Early 90s style is taking over the world. Pizza Hut has their classic logo, I was able to very recently buy Crystal Pepsi, and they keep remaking movies that have varying levels of success to say the least. Video games have been leading the charge for years. Sometimes you get something like Matt Hazard that is just using the concept of retro games to be unfunny and pandering. Or you get something like Octopath Traveler or Stardew Valley that knows that the art style is evergreen even if it would never play it on the represented hardware. Mega Man 9 and Mega Man 10 were just all new games that follow the rules of MM1 and MM2 to almost a fault. Remasters, remakes, spiritual successors, homages; video games love it all and it’s a non stop deluge of pixel art and chiptunes.

Panzer Paladin falls in a Stranger Things type category. It’s a genuinely brilliant take on several classic genres, just like that show. It’s aware that it takes place in the 80s and plays with it, playing into tropes and gimmicks that feel straight out of an NES game with its visuals and gameplay, even if these choices would never honestly fly on real hardware. It FEELS right, which I think is more important than being right. Mega Man 9 and 10 were great, but they limited themselves to a narrow, boring time without doing anything to innovate. They didn’t even have the sliding gameplay gimmick that they introduced in later NES entries. They are great, but also forgettable. Shovel Knight really figured out what makes a “modern retro” title work. Borrowing very, VERY heavily from the NES’s Ducktales, Shovel Knight, and all of its subsequent title updates, was an instant success. A humorous take on old NES games, Shovel Knight did an absolutely pitch perfect recreation of what it felt like to play one of those old games regardless of the fact that it wouldn’t run on old hardware. If you hadn’t played an NES in years, you might even be convinced it’s a port of an older game. Which is exactly what Panzer Paladin pulls off too.

Panzer Paladin follows lead character Flame. She is a pilot of a mech (‘Paladins’ as they are called in this game… just like the title!) named Grit (that seems to be sentient) and is part of the rescue services. It’s basically a Mech Coast Guard. The plot starts off threadbare but gets really SCP Wiki out there later on. The antagonist in the game is named Ravenous, a giant evil bird that has an army of evil mythological creatures that attack earth: Anubis. Wendigo. Medusa. You know, THAT crew. There is also a mysterious Horseman that is just always showing up. What’s HIS deal? You do get weapons from him from time to time so he’s cool. The enemy group has their own theme song, too.

And in a perfect segway, let’s talk about weapons. The entirety of the game’s 2D platforming combat revolves around different ways you interact with weapons. Weapons are currency, health, magic, XP. All of it. By default you have nothing but a fist but that changes real fast. Enemies drop weapons, which are all blade based for the most part. The best way to describe the system here is “Breath of the Wild Extra.” You are always picking up weapons. You NEED these weapons. Even if your inventory is full, you need these badly. They also all have a durability system in place, and when they’re destroyed they are gone forever. That kinda sucks right? But also like Breath of the Wild, they are just constantly handing you weapons so it’s more of a nuisance than a problem.

But it doesn’t end there. Of course it doesn’t. You see, you have a magic system in place. Every weapon you pick up has a buff or spell attached to it, which is great, but you don’t have an MP gauge. In order to use the spell, you must destroy a weapon. In my case I hold the two trigger buttons down for a couple seconds, a meter fills up, and BOOM. The weapon explodes and it grants the effect. Sometimes it’s health, or a defense or attack buff, and sometimes it’s a screen wiping magic spell. You have to play this smart and need to decide when is the best time to use it. Can I make this sacrifice?  I need health. OH NO.

And the checkpoints? Let me tell you about the checkpoints. They aren’t what I would call forgiving. In order to activate a checkpoint, guess what you have to do? That’s right: sacrifice a weapon. Slide that spear or arrow right into the pedestal and your position is saved at the sacrifice of a weapon. There are usually two of these per level, and usually one right before a boss, which means that by activating a checkpoint you are going into a boss battle with one less weapon or spell. You can reclaim the weapon at any time, but at the sacrifice of the checkpoint, which may be necessary because if you fall in a boss battle there is no going backwards. There are Super Mario Bros. 1 rules in place here. So grab that weapon and hope that you can figure this out with one blade, knowing that if you fall again, you’ll likely go back to wherever the previous checkpoint was, which could be all the way at the beginning of the stage. This is fine, because you do need more weapons, but also it’s basically like starting over.

The bosses are laid out like a Mega Man “Choose Your Boss” set up, but the order you pick is a little less important. Upon defeat you earn their weapon, but it’s just as destructible as the rest. At the end of the stage any blade you still had or collected that wasn’t added to your direct inventory can be spent in the lab to upgrade Grit, making his health more substantial. So you truly do have to just grab every single weapon you can, just to improve the mech at the end.

Weapons also have different style types: swords, spears, blunt. They can be used to destroy bricks which are hiding even more powerful weapons throughout stages. The weapons do so much in this game that it’s ridiculous, and the risk/reward behind every decision you make concerning them is one of the most satisfying ways of going about a durability system. I genuinely, truly love the mechanics of the entire thing.

And that’s not even really the end of the combat. You remember Master Blaster? You Remember Bionic Commando and Castlevania? Well, at any time Flame can hop out of Grit and run around the stage. This is the main way of gaining HP because there are huge tanks filled with… HP Juice?  Gasoline? Who knows what they are. If Flame wanders off too far or is in a place that Grit can’t get through, portals in the area can summon the mech back to her. Flame also has an electro whip, which doesn’t have durability so you can use it forever. It’s powerful and has a long range, which is perfect for the platform segments where you need to swing. Sometimes these lead to secret areas, sometimes they’re just forced areas to change things up, and other times they’re a risk/reward for an HP refill. Flame’s HP level is low and you can only take a couple of hits before she’s done, whereas Grit can take a lot more damage obviously. He *IS* a giant mech. But if he’s destroyed in battle, you’re dumped out and need to get around on foot until you find an HP tank and the portal. This all sounds convoluted and I apologize, but none if it feels that way. It all makes sense and none of it feels forced in any way. It all comes together incredibly tight.

To wrap things up, I’d be remiss not to mention the thing that will probably get the most buzz because of what the game capable of. Blacksmith Mode is a feature that lets you get to draw pixel art weapons for the game. Your own artistic ability is the only real limit. You want to make a giant fork? Dog on a leash? Anime pillow? Saints Row weapons? You can do it. You can name it, and you choose the stats. And when you’re done? It gets uploaded and can and will appear in somebody else’s game. The developers warn you about this before you do anything. They know what you’re going to do and they are begging you not to do it. Please. For the sake of the children, stop. There are also speed run and remix modes, too, but the Blacksmith is what everyone will be talking about.

It’s hard to stand out as a retro throwback game these days. The market is filled with them, flooded even. So many of these are just blips on a radar, destined to be lost because they are just “I want to make my version of this one specific game” projects. Tribute Games’ Panzer Paladin, like Shovel Knight before it, forges its own identity. It isn’t just an homage to a particular genre or game from the 80s/90s, it’s a love letter to all of it, carving its path and creating truly unique gameplay. It’s brutally hard, and that’s the one thing I would probably have to say negative about it. It’s unforgiving. I’m not great at video games, I’ll sadly admit to that, so I stay in my own lane and will play easy mode. (Judge me, I don’t care. I have nothing to prove to you.) But with Paladin I kept it on its default setting and never felt like it was being particularly cheap or that I couldn’t get through any specific section. It’s just HARD, Mega Man hard, and I can get behind that. A game that I knew virtually nothing about until I downloaded it has made its way onto my short list of favorite games of the year. I can’t recommend it enough.