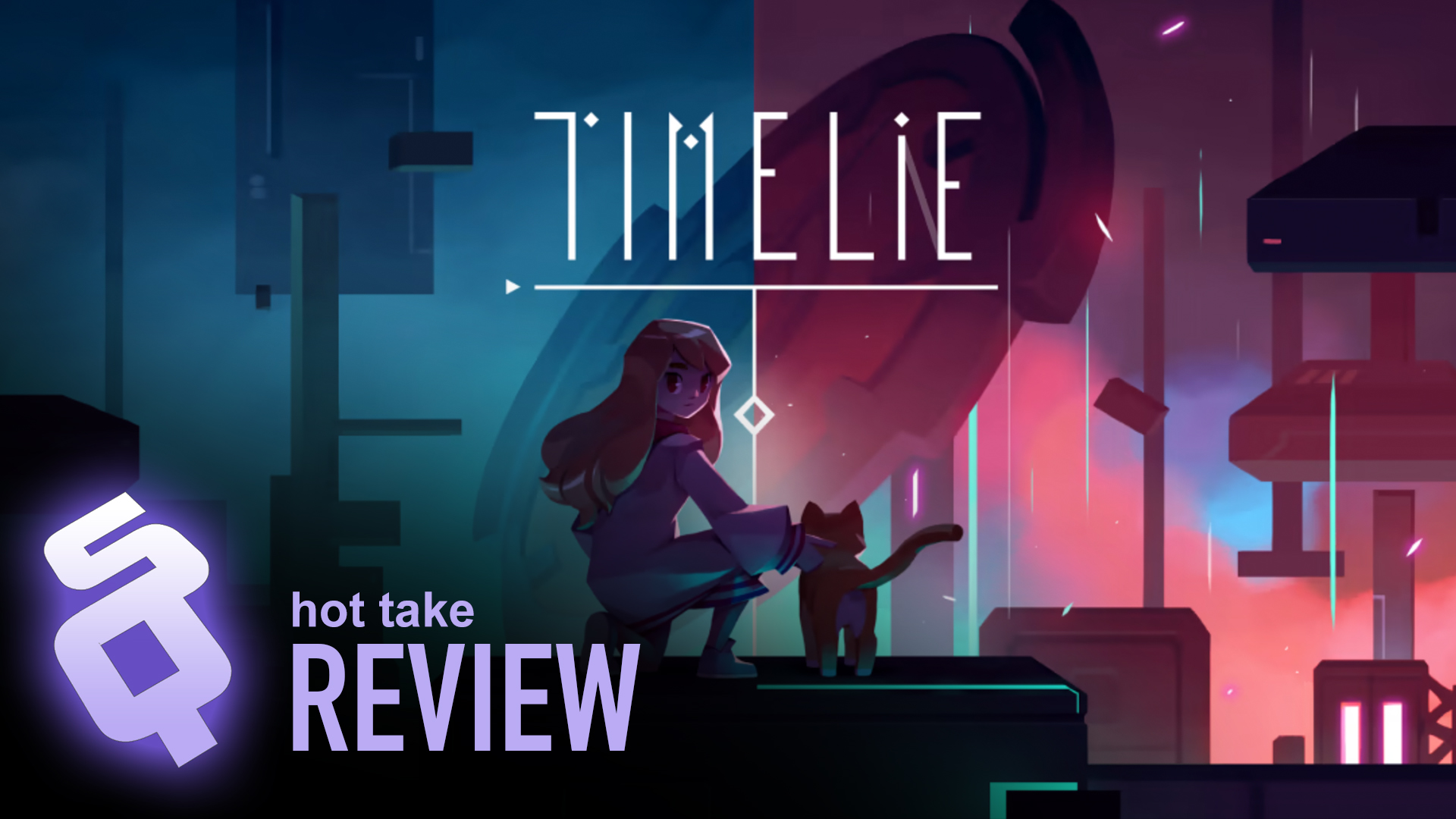 The scientific method is a millennia-old process that has helped prove out ideas, solve problems, and lead humanity towards new endeavors. Though its understood beginnings are in the physical world, the basic principles apply to just about everything: Observe – Hypothesize – Test – Refine – Start Again. It’s fascinating, then, when a product based on entertainment, a video game, manages to focus on that method as its basis when it blends the physical and the philosophical. Timelie mixes science and art, test and adjust, in a novel and enjoyable approach that feels right at home on Nintendo’s Switch.

Time manipulation itself is a fascinating genre that has been emerging quickly in pop culture over the last decade, and it’s at the heart of Timelie. The game approaches it almost like a visual storybook. First releasing on PCs waaaaay back in 2020 (remember that year decade?) it tasks us with making micro and macro movements, playing out the scene, and making the adjustments necessary to solve the stage-based puzzles. To get to the other end of a stage, we can rewind and undo our moves, avoiding danger in the process.

Like that Scientific Method, it plays out like so: Survey the level – Make my initial move on a literal timeline to map out the dangers – Rewind to just before peril – Make incremental changes and try again. The hook of the experience is in that rewinding, that testing over and over again. As someone who loves the UNDO button of every bit of software I use, this concept in a is a godsend. We see it in Forza, but it’s only really a rewind feature there. In Timelie, we can make find new ways to open doors, to maneuver secondary characters (like cats!), and to rebuild structures that are permanently in play regardless of time. It’s not just about the puzzles, either. The sense of tension is baked into the experience, especially in the beginning of the game where we meet robotic sentries that chase and harm us if they see us. It forces a constant “will this work will this work will this work?” line to run through our heads.

It feels fresh, often like we’re fidgeting with time and space rather then using it as a crutch to fix a mistake. Sometimes we can even be way off, and our intended plan could get us to 75% of the solution before we realize we’ve hit a dead end, so we go back and redo, retest. There are multiple ways to solve some of the puzzles, too, so like science no one way is always the right way. There’s no one big “A HA!” moment, but a series of smaller “oh, okay!” ones.

That makes the puzzles manageable, in a way, because I’m not trying to play it our perfectly just to whatever I find comfortable.

The offset to the manageable puzzles is that the environmental design lacks enough uniqueness from stage to stage. The perils are often very similar, and the visual design feels like it’s always pulling from the same pool of aesthetic elements. It all ends up looking the same, even though the puzzles aren’t.

In fact, I’ve replayed a few to test out newer theories of how to solve them, but at times I can’t remember what the point of the puzzle was in the first place.

That somewhat repetitive aesthetic can wear us down a bit, but thanks to the nature of the Switch it doesn’t. Timelie is designed to be picked up, played a bit, and then put back down for later; oftentimes stepping away can help give us enough of a break to come back to a puzzle with fresh eyes. Though it looks and functions fine in docked mode, its bread and butter is in the Switch’s handheld, undocked side, interacting with it while we’re watching something on TV.

Timelie is an enjoyable puzzle game. It doesn’t leave us frustrated, it just asks us to keep trying. Its magic doesn’t lie in the one ultimate solution, but in the many, and in how each playthrough can lead to a very different way to solve the same puzzle. Test, test, test. Try it again. “You’ll get it, don’t worry,” we can almost hear it say. And when we do, we feel like we’ve succeeded in our hypotheses, helping tell the latest snippet of a unique story.