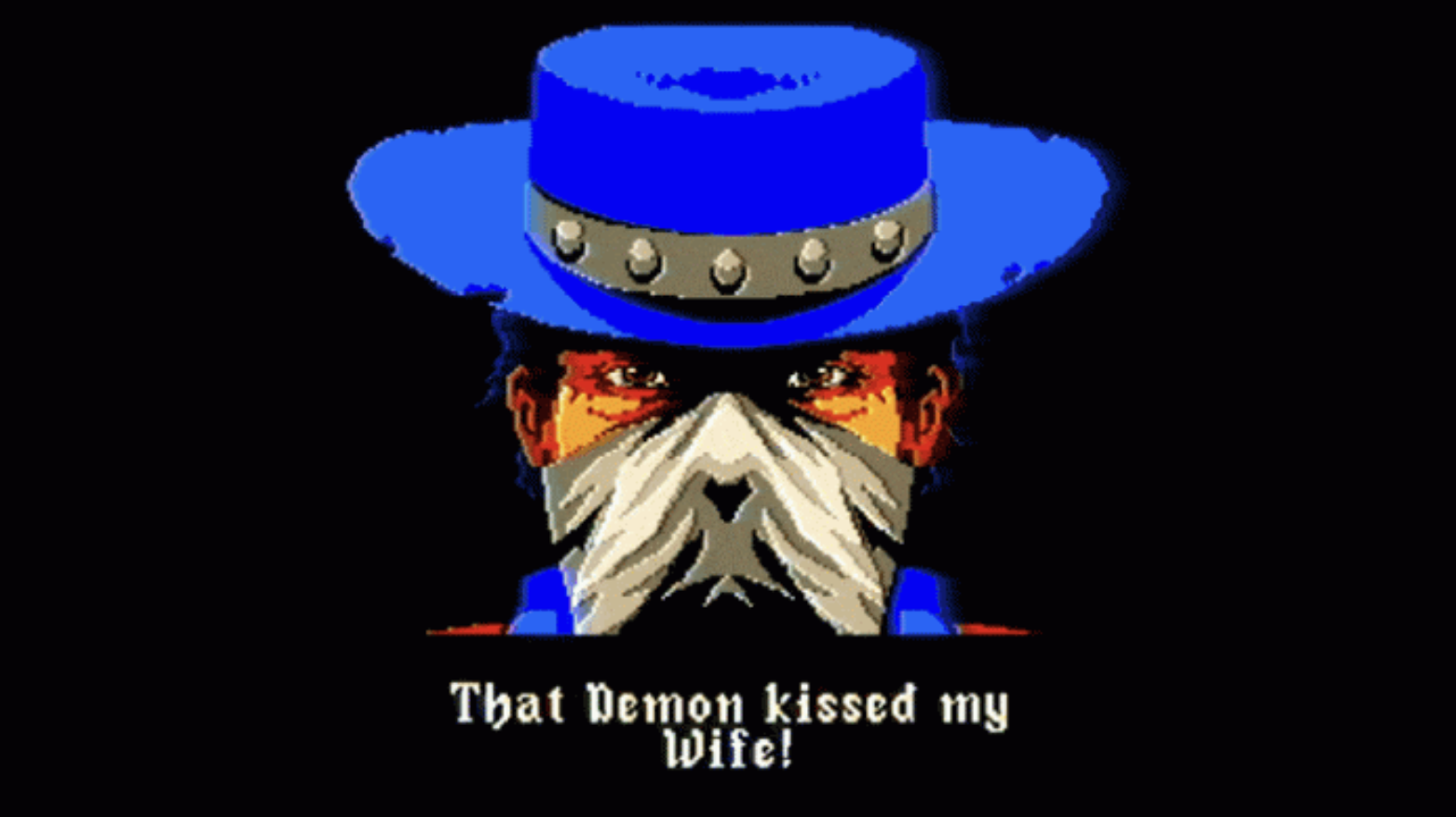 Even if you don’t know much about Demon Throttle you’ve probably heard about it before, as developer Doinksoft and publisher Devolver Digital caused quite a stir when it was announced that it would be releasing a purely physical release.

While its previous game was a novel take on that classic metroidvania style of game, Demon Throttle takes the same kind of approach, this time applying it to the shmup genre.

Demon Throttle lays all of it’s cards out on the table right from the get. You’ve got the Gunslinger, and your Vampiress. The former is on the hunt for a demon after it ran off with his wife, and the latter is on a quest to reclaim the four chalices the demon stole from her.

Much like the developer’s previous games, all of the story and exposition in Demon Throttle is delivered in a fun and campy way, even having what little recorded dialogue there is run through a heavy distortion filter sounding like it’s coming through broken speakers on a bad tube TV. And that campy vibe can definitely be felt throughout the rest of the game.

At its core Demon Throttle is a vertical scrolling shooter similar in style to Ikari Warriors and King’s Knight. General moment-to-moment gameplay is simple, running through the environment and taking out enemies and deforming terrain to gain experience and grab power ups and stat increases from enemy drops. That said simple isn’t bad, and the game counters that simplicity by just throwing slews of enemies at you, at times reaching bullet hell levels of difficulty, although those moments are infrequent and reserved for more bombastic boss fights.

Every run will feature both characters whether you’re playing single player or co-op, with the single player experience having you start with an AI companion, but allowing you to switch between them at at any time with the press of the button. The game encourages you to regularly switch between the two by having them level independently from each other. This means that not only do they gain their own experience points by blasting enemies (which will in turn level up your character and weapon abilities), but the item pickups that increase attributes like movement speed, attack power, luck and the like, so you’ll find yourself bouncing back and forth between the Gunslinger and Vampiress to  ensure an even balance of power and consistent leveling throughout your run.

In line with the era and style of game that Demon Throttle is pulling its inspiration from, there are only four levels to shoot your way through, each with a different theme and vibe. While I’m sure there are plenty out there who would have liked to see more levels in general, I found the variety that was there more than varied enough to keep me going and I never felt like the game wasn’t doing enough with environments in the 30 minutes spent shooting my way through hordes of enemies.

Each stage also contains a hidden stairway that you can uncover which lead to a boss fight. Emerge victorious and not only do you return to the level proper, but you’ll also reclaim one of the Vampiress’ four stolen chalices. Collecting all four chalices unlocks a bonus, even more difficult boss fight at the end of the game, so there’s a definite impetus to seek out and complete these optional dungeons.

With the game being so run-focused and having only spent 30 minutes with it, I’m sure there’s plenty more to discover, with the developer hinting at sizable aspects of the game being removed for the demo, such as coin drops and an item shop, but we won’t know for sure until it drops later this year.