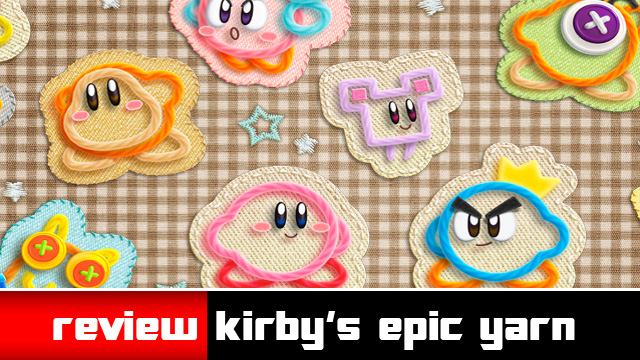 I consider myself somewhat of a Kirby connoisseur.  I have been with the series since its inception on the Gameboy, up through to the “meh-ish” Kirby’s Squeak Squad on the Nintendo DS, and most everything in between.  That being said, one of my initial concerns from seeing press footage of the game was that it may not “feel” like a traditional Kirby platformer; rather, it was just lending its name-sake to the visually daring title, in the same way that Kirby’s Canvas Curse did.  In other words, it could have been any character in the game and it would have still been amazing.

Many comparisons can be drawn between Epic Yarn and Canvas Curse, due to their bold  and unique directions with the title’s star.  I think Epic Yarn would have still been great, had it been some new/other character, but the fact that they choose Kirby goes to show that Nintendo is not afraid of taking chances with him specifically.  If Epic Yarn was to be that of a traditional 2D platformer starting the pink fluff ball, then I had initial fears about the game play, e.g. foregoing the ability for him to transform and not using the power of inhalation to thwart foes.

I can say that the yarn metaphor, while providing a constantly clever backdrop, also extends to Kirby’s core game play, which plays just like most traditional Kirby games, aside from a few minor changes.  The yarn whip has enough “length” and flexibility, in that its very much like “sucking up” enemies in the other Kirby incarnations.  While Kirby doesn’t transform based on the enemy he has “wound up”, he does find other eye-bleedingly-adorable things to turn into. 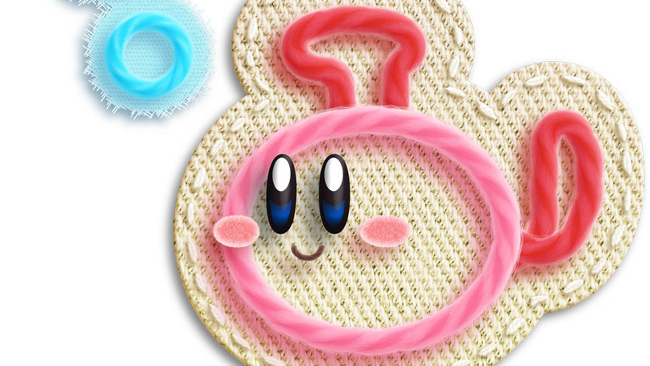 Kirby can “dash-run” with a quick double tap of the D-pad, just like older games, but now instead of simply running he takes the shape of a little car.  While Kirby can no longer float at will, he can glide safely down to earth allowing you to recover from some mis-calculated jumps, or snag those precarious jewels to try to gold star the level.

What isn’t like the older titles is the fact Kirby can’t die in this game; literally, you can’t let the little guy meet his maker.  Instead the developers use the incentives of “Medals”, obtained after acquiring several jewels, to allow the player to impose their own difficulty level on the game at any given moment.  For example, you can run through a level like a mad man and eventually get to the end, but have acquired no jewels.  “So what,” you say!?  The jewel collection becomes almost obsessive, and while you don’t have to start the level over when you mis-time that jump and fall straight into a pit, you sure feel like you might as well, especially after seeing all your precious jewels pour from your limp yarn body into the chasm you just descended into.

The jewel collection is similar to collecting rings in Sonic The Hedgehog, however the penalty for eventually loosing them all is the loss of Kirby’s own self worth, ie. not seeing your “Lives” tick down by one.  When you fall in a pit or run into an enemy, a little yarn icon comes to reset you to a safe location, dispensing your jewels all around in the process.  If you’re lucky, you can pick them all back up again and you’re no more worse for the wear.

Initially I didn’t like the idea of “not dying”, however the more I thought about it, the more I realized that it is kind of a classic idea. It’s a hold over from the arcade days, where getting another quarter out of you was the goal and dying in the game was costly, both literally and figuratively, but there was always an option to continue.  Kirby games are never designed to be especially difficult, so this concept works for the game and is almost a brilliant when opened to two players.

Simultaneous multi-player is a first for a traditional side-scroller Kirby, and provides all the delight found in a game like New Super Mario Bros. Wii but without some of the frustrations that came along with players who were less skilled (or just flat out jerks).  Because of the “no die” rule, it actually makes situations that otherwise could be tedious into ones that are much more pleasant; you only have your lack of teamwork to explain why you didn’t gold star a level.  By the end of the game, I felt like this was exactly on par with the “difficulty” in previous Kirby games, so the lack of death really didn’t change the end result of how the games typically feel.

I would also be remiss if I didn’t mention the music.  While its not on a grandiose scale like Super Mario Galaxy‘s fully orchestrated pieces, the game’s soundtrack has one of the most consistent musical themes, making you feel like a holiday Peanuts special is playing in the background.  In fact, one of my favorite levels plays on the idea music, where bouncing on a base drum propels you into a music sheet-like platform and hitting every ‘note’ makes jewel collection that much more satisfying. 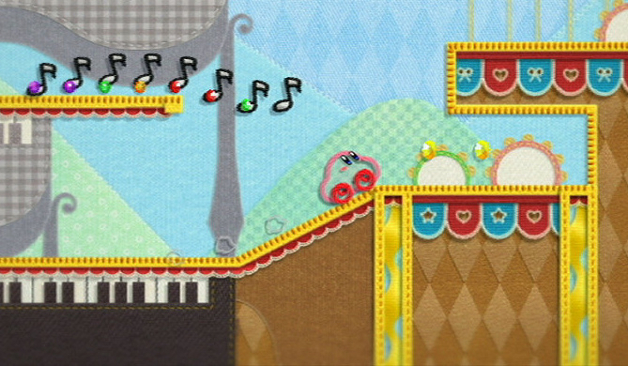 I haven’t discussed level design much up to this point, and part of the reason is because describing some of them would really take away from the magic.  Each level has a wealth of interesting ideas, playing up the “yarn” motif, and makes the completion of one leaving you in anticipation of what the next will bring. Similar to Super Mario Galaxy 2 you rarely see a recycled idea, and each level brings consistently new and interesting backdrops that integrate with the game play so well that it’s clear the art direction wasn’t chosen just for the sake of it.  This is not a bland Kirby game with a cool new design. The design is integral to the way the game plays: a rare, and inspiring marriage of design and game play.

While Kirby’s child like coo’s and giggles are enough to make your teeth rot at times, this is truly a game for all ages.  If you like platformers, I defy you to play this without cracking a smile.  If you have children, this is an instant classic that the whole family will love.  It’s simple enough to pick up but contains the same advanced move set that will make long-time Kirby fans feel right at home.  People often talk about that Nintendo “magic”, and this title distills that intangible in one single $50 dollar disk.

This review is based on a retail copy of the game purchased by the reviewer.  Images courtesy of Nintendo.