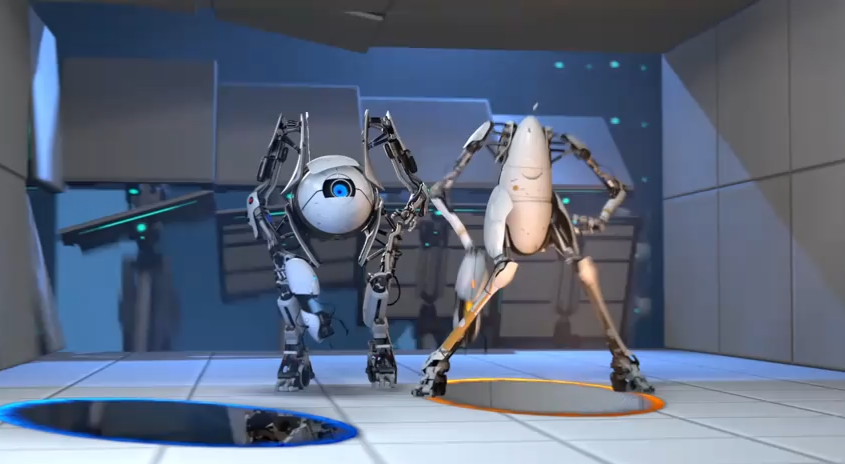 [Note: This piece was originally going to be called “The Physics of Portal, ” but I’ve decided that that would be inappropriate.  If you’ve played or completed a Portal game, you know how the game works.  In no way am I trying to teach you how to play.  This post is for the curious.  If you’re genuinely interested in physics and love Portal, why not learn about physics and read about Portal at the same time?]

The wonderful thing about Portal is that even though the player is given several physics-defying tools, Valve tries very hard to make sure that the basic principles of Newtonian mechanics are followed wherever possible.  In this feature, we briefly examine a few topics in physics that pertain to what will be one of this year’s most beloved video games, Portal 2.

The Portal:  Neither Here Nor There

We clearly don’t have the technology to create a portal gun.  Even if we did, it would be a more primitive form of teleportation.  Theoretical physicist Michio Kaku believes that in the future, we will be able to teleport water molecules to the moon as scientists have already been able to teleport atoms of simple elements from one place to another.  Unfortunately, this type of teleportation requires destroying the original copy of something, sending information about this object’s make-up somewhere else, and re-building it from scratch.  This would be very sketchy for humans considering the number of cells (and within them, atoms) that make up a human body.

The teleportation technology in Portal lies way beyond our means (for now) and is deeply embedded in the realm of science fiction.  When you think about how you’ve interacted with portals in the game, you have to appreciate how the folks at Valve give Isaac Newton a nod in their attempt to stay true to classical mechanics — that is, once you get by that first big “hump,” the portals themselves.

The conservation of mass is one of physics’ most fundamental rules.  Matter can neither be created nor destroyed.  We see this in the game as Chell is free to jump through portals and transport cubes from one place to another.  Whatever goes into one portal comes out the other.

More importantly, not only do portals conserve mass, they also conserve life!  Now, it’s possible that some of you are thinking that the portal gun just creates wormholes, but this isn’t the case.

If you were to sit in on an upper-level, undergraduate lecture about wormholes and general relativity, there’s a good chance that a lot of the discussion would revolve around the Einstein-Rosen bridge (also known as the Schwarzchild wormhole).  In short, this type of wormhole is a bridge between two points in the space-time continuum:  a black hole at the “entrance” and a white hole at the “exit.”  These singularities suck up and spit out matter and radiation, respectively.  Space-time is so warped at the mouths of both singularities that there would be no way to survive being stretched out like that.  And even if you did survive, you probably wouldn’t survive on the way out.  God wouldn’t be able to protect Chell near the event horizon (read: point of no return) of a black hole.  Even assuming that prayers travel at the speed of light, God would not hear Chell’s cries since photons can’t even escape the pull of a black hole.

So, no.  The portal gun does not create wormholes.  Would we be able to harness Aperture Science’s technology and create their kind of portal?  Maybe someday.