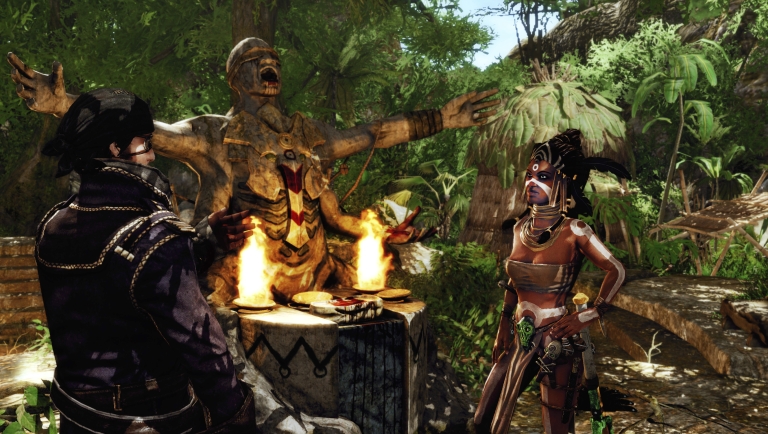 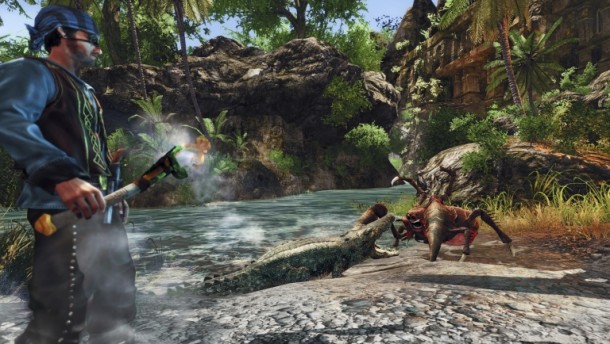 Risen 2: Dark Waters and I shared a special moment, where after a few hours of nudging, everything clicked. It was during a conversation with a perpetually drunk and incurably deaf man who — from what I could make out from the cuts on his withered face, and the workbench he used as a crutch — was a gunsmith. “I WOULD LIKE TO BUY A GUN!” I yelled back at him after he loudly informed me of his disability. His response was both irritated and completely oblivious to my question. We went back and forth screaming at each other until he was able to piece together enough words to understand my question. I giggled as I realized the effort Risen 2 had just used to tease my own impatience with a character who I ended up only talking to once.

Developer Piranha Bytes returns to the rum-soaked era of swashbuckling and “landlubbers” in Risen 2. Set long enough for the main character to succumb to alcoholism after 2009’s Risen, the quirks of Risen 2’s era have been replaced with a pervading tension between the mortals and the titan lords. The Inquisition, a civilized, militaristic group, residing in the stone, grey walls of the Crystal Fortress, struggle to defend their homeland Caldera from the ship-devouring Kraken. Out of an extreme amount of desperation, their only hope is to drag the only man who has actually defeated a titan lord out of his drunken stupor to go undercover as a pirate. Located on the island of Tacarigua’s eastern shore, the pirates have implanted themselves while they too war against the effects of the titan lords. Docked there is Captain Gregorius Steelbeard, the only man with knowledge of a weapon powerful enough to defeat the Kraken, and possibly Mara as well. After a swift rescue from one of the Kraken’s swallowed ships, his abandoned daughter Patty chooses to come along on the expedition to Tacarigua.

Having come off of the frigid lands of the Elder Scrolls V: Skyrim, Risen 2 provides a refreshingly warm display of palm trees and vibrant foliage. Wild boar and monkeys wade through thick grass and stretching valleys between the concentrated towns scattered about the land. Remnants from failed expeditions and shipwrecked crews scatter the shore, decayed and washing away with the tide. While inviting at first, the setting remains barbaric and threatening when discovering new locations or stepping into an abandoned cave. It’s clear the humans don’t rule every inch of the island. 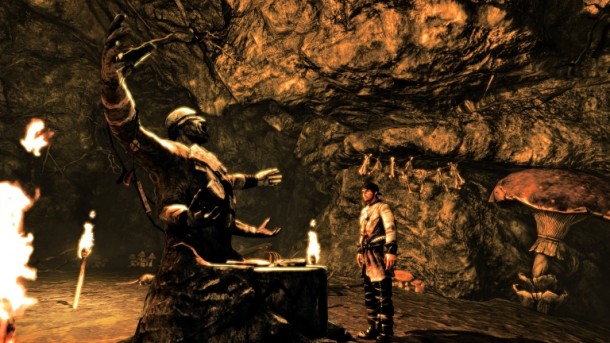 Errands and favors break up the critical path toward the east. I helped a prisoner escape, a governor take care of escaped slaves, or “involuntary servants” as he so correctly put it, and hunted a trophy boar down for gold. A fight between two brutes arguing over who should carry a barrel of water to the local pub ended in a spectacular duel, the winner deciding who goes and who stays. A drought caused by a colony of over-sized roaches threatened a town’s rum supply, so I helped replenish it with my sharp-edged roach repellent.

Combat in Risen 2 requires steady concentration and a quick evaluation of an opponent’s attacking style. With accurate timing, the battles become a dazzling clash of steel and bravado. Just as an enemy strikes, holding down the right mouse button will parry their attack, typically staggering them long enough to lay into them with a few swipes with the left mouse button. The game shines during lively one-on-one duels because they feel like they could go any way. Firearms find their way into battle as well. The camera will zoom into a over the shoulder view when firing. The weapons sound powerful and as expected deal large amounts of damage compared to the whittling nature of a sword, but the scarcity of bullets balances their strength. 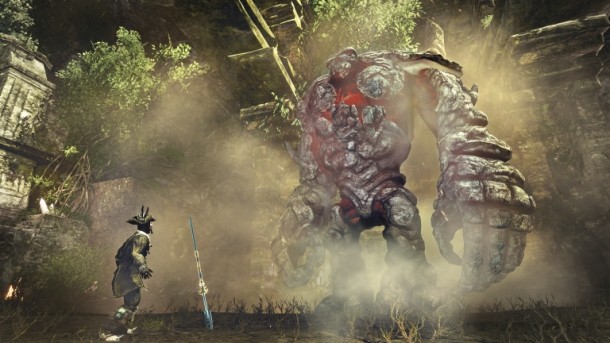 Instead of experience, quests and kills reward “Glory” used to invest points into one of the five attributes: Blades, Firearms, Toughness, Cunning, and Voodoo. A particular attribute’s skills will open up after reaching a certain level. They include abilities like lockpicking, pickpocketing, a riposte attack, kicking, and the ability to end conversations with a gunshot to someone’s head.  They can be learned from separate instructors around the world. Similar to how other RPGs handle them, skills provide ways to bypass steps in quests, but it’s frequently possible to approach a situation differently with success, albeit with a little more time spent exploring.

Risen 2’s hosts snappy dialogue that proves to be more insightful and humorous rather than dry and pointless. It’s a world of mostly sly, deceitful individuals, and quite accurately they’re all out to backstab each other in some way or another. Listening to their amusing motivations adds plenty of entertaining context to the lore and sometimes holds important clues for quests.

What I liked most from my time with Risen 2 was its determination to take my hand with its thick, grubby hand and introduce me to the brute life of a pirate with the clinking of beer mugs filling the background. From the rhythmic sword fights to the blurry drinking contests, I felt like I threw my kind heart overboard. The oath spreads to the characters, some sly and distrustful and others struggling to keep balance and participate in a conversation simultaneously. Risen 2 stumbles into North America April 24, in the meantime I’ll be searching the internet for hot deals on a finely crafted cutlass or two.

This preview is based off of the PC version beta code of the game provided by the publisher. Images courtesy of Deep Silver.