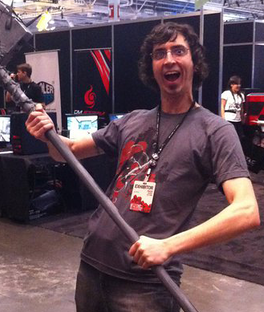 Indie developers pop up on a near daily basis. Between being Kickstarted, and using free to download development tools, if you have an idea for a videogame in 2012 there is a good chance you can make that a reality. So, it takes something special to stand out — it can seem like every idea is being made at this point.

Enter James Silva, one half of the duo known as Ska Studios, which is based in the hotbed of games development: upstate New York. James is a unique dude. I’m not saying that because I have nothing better to say about him, but because he truly is unique. In the opportunities I have had to interview people about videogames, I haven’t met anyone quite like him. For instance, at 1pm on PAX Sunday, he put up with bullshit from me for 15 minutes that had almost nothing to do with Charlie Murder (Ska’s newest game, which we’ll touch on a bit later).

I was burnt out; too many poor night time decisions. James was still chipper, though he looked tired to the point of flipping his merch table (10+ hours every day dealing with even the best of fans will do that to you). I just wanted to do a good interview, something I can’t really pull off on the best of days. However, walking down to my appointment I decided to toss out the bland questions about Charlie Murder that he had answered dozens of times before. 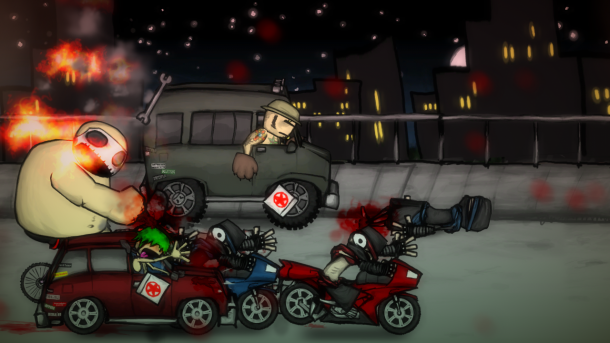 Why? Because having met James at E3 last year, I knew he was a unique dude, and even more importantly, he had good stories. So I asked Jason about life, the universe, and everything, minus those things.

James grew up wanting to be a game developer. Conceptualizing maps, characters, and worlds in drawings that he would ship off to Capcom, he hoped they would take his ideas and create the game that he wanted. Being young, he didn’t understand the realities of creating a game (those realities that he is clearly all too familiar with, now) in the strange videogame industry.

If you are a fan of Ska Studios’ games, which you should be, they are so dope, you will have noticed that they are side-scrollers. Me being the super amazing interviewer that I am. I pointed that out as if he didn’t know that particular detail about his games already. Still, since he isn’t a complete dullard like me, he gave an answer that made so much sense I felt even dumber: “From a technical perspective it is a lot more doable. When I sit down to sketch a picture, I’m sketching a picture, not modeling in 3D.”

James went on to speak about how as a two-person team, with a tight budget, it is also easier to make brilliant art come to life in a 2D perspective. As for the art direction, you may think he needs to be in a damn psych ward. I mean…did you see Dishwasher: Vampire Smile? That shit is fucked up. He took my mocking down a much more constructive path. He explained to me that all of his art direction is a product of place and time. Whatever he thinks should happen, he puts on paper and ends up being in his games. 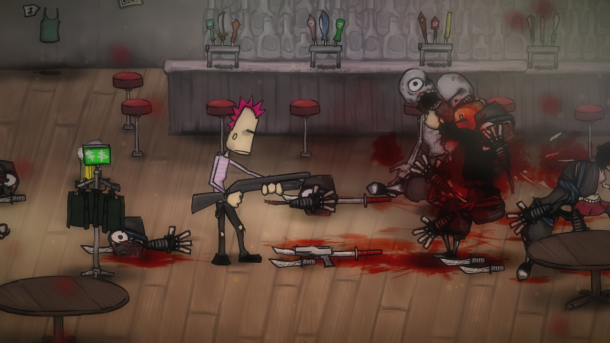 He brought up Charlie Murder, mentioning the progression the art took from a rough, flat-shaded look a la Castle Crashers, to the darker and more toned stylings of the current (and most likely final) look of the game. Speaking of Castle Crashers, it turns out James isn’t the only person who knew the original art (along with the side-scrolling, beat ’em up, RPG-lite action) had a few similarities to the 2008 Summer of Arcade title. Several folks have mentioned to him that the game felt like a rip-off of Castle Crashers, something he was quick to dispel. Saying that he loves what Dan Paladin and Behemoth did with the game, but it was still offensive to him that they would just about say he is stealing from them. James mentioned that he puts a lot of work into every game he makes, and while nothing is new in 2012, he thinks that his take on old styles of games is unique.

On the opposite end, there are fans that compare Charlie Murder to Castle Crashers in a positive way. They see the similarities of two different companies taking two unique stabs at a common idea, and like seeing the outcome from multiple perspectives. James even stated that nothing felt more right to him, than making beat ’em up games as that was what he had in the arcades as a child.

Right now, Charlie Murder is at the front of his mind. Ska Studios has been in a heavy crunch for quite some time now trying to flesh the title out into a full XBLA title. Charlie Murder started as an XBLIG venture. James had planned for the game to hit XBLIG before last April’s Dishwasher: Vampire Smile, however, Microsoft had different plans. Seeing the potential in the game, they asked James to, “Make that fucking game something we can promote on XBLA.” (I’m paraphrasing about 100%, here.) Ska, who was already in crunch on Vampire Smile said, “Totes, we got you, dawg.” (Again, paraphrasing.) So Charlie Murder was shelved. 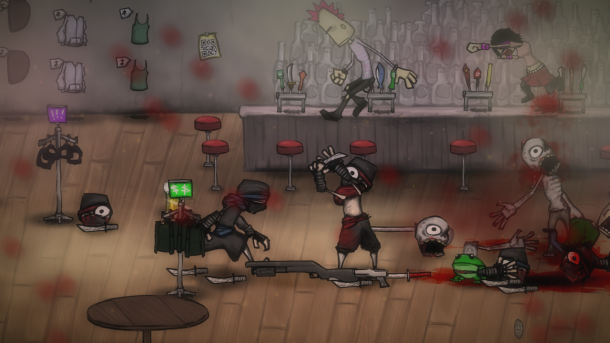 Post VS, James had to deal with the task of fleshing out a $1 indie game to a full-priced Xbox Live Arcade title. So how does that happen? Depth. Variety. The original Charlie Murder was a “Dumb button masher,” but the new game has a full combo system (similar to that in VS), team-up combos, unlockable skills, leveling, “Crazy-ass magic,” minion summoning, meteor summoning, finishing moves, and…“Stuff.”

So what is Charlie Murder? Charlie Murder is the namesake for the band Charlie Murder in the game Charlie Murder. Trying to get to the Battle of the Bands, Charlie Murder squares off with their arch-nemeses Gore Quoffer. Apparently Charlie Murder’s punk doesn’t gel with Gore Quoffer’s metal. Who knew (actually, a few of you may have known that)? Gore Quoffer is doing evil shit like raising armies of undead and summoning all sorts of demons to stop you from making it. So with the above mentioned beat ’em up actions, it is your job to make sure the band makes it to their destination.

I can’t do the game justice with my sentences, so take a moment to go visit our friends at Giant Bomb, who demoed the game at PAX Prime 2011 with James Silva along for the ride. CLICK HERE!

Great video, right? Those guys are a hoot.

So a game about two bands trying to make it to a Battle of the Bands from a developer named Ska Studios. Music is probably a big deal, right? Well, yea, it is. If you haven’t heard me say it yet, James is a pretty unique dude. So when tasked with setting the music to his game he of course holed himself up in his basement with an iMac and Garageband, and created himself a soundtrack. Point of fact, it took like 302 games (this number may be exaggerated by roughly 289) before Ska Studios finally put ska into a game, that game being Charlie Murder.

I was already going to buy Charlie Murder. Dishwasher: Vampire Smile is one of my favorite games on the Xbox 360 and for my money, ZP2KX can’t be beat if you are looking for a night of tooling around a multiplayer game with a bunch of friends. However, if you haven’t seen frame one of Charlie Murder, I really encourage you to check out that Giant Bomb Quick Look or this trailer, here. You can also buy whole heaps of Ska Studios game soundtracks from here, in which you can name your own price.

If you want to tear up, read this story and watch this video of James proposing to his Ska Studios partner-in-crime, Michelle: http://bit.ly/HOps3x