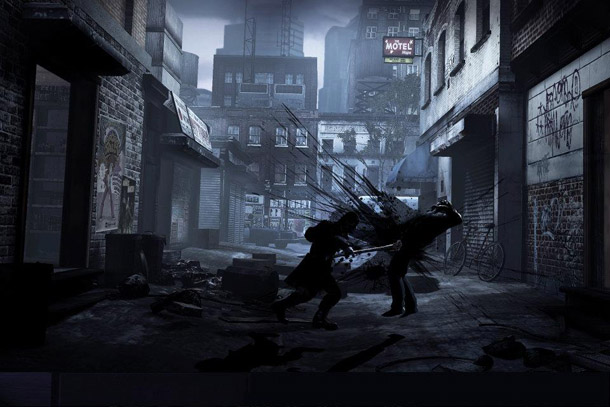 You may have read that we loved Tequila Works’ Deadlight enough to give it a Best of E3 2012 award. Well, this hands-on preview should explain why, and it’s mostly because it combines aspects of a few of our favorite experiences: Another World, Alan Wake, and Shadow Complex.

Nestled behind the Kinectstravaganza at E3 and away from the eyes of many of the showgoers, Deadlight was easy to pass by. But, once I stopped to take a peak at it I was immediately glued. The demo on hand begins with an animated comic depicting a zombie outbreak. A group of survivors are trapped in a gymnasium, and one (Randall) sacrifices himself to allow the others to escape. The game picks up with Randall preparing for the zombies to break into the safe room.

As a side-scrolling room-based platformer, the game plays similar to Shadow Complex with a bit of Another World thrown in. I was tasked to move from left to right, up and down, and then back to the left again depending on what the task was. I had to grab weapons wherever I could find them, usually with only one or two uses before they broke or became lodged into a zombie or shadow demon. Ammunition was often difficult to come by, so I had to position myself as more of a “runner”, dodging enemies when I could.

Because the plot is about one man trying to survive, running is probably going to be very important for anyone playing Deadlight. It’s not at all slowly paced, as jumps and leaps were often done at the end of my run. Even though speed was important, it still managed to remain tense and oftentimes had me sweating to pull off a last-moment procedure to avoid an enemy.

The aesthetic of the game, although from a side view perspective, reminded me a lot of Alan Wake. The use of shadows and light, the demons, the noir feel… it was both eerie and dramatic. It’s going to be one of the games that playing late at night would add to the mystique and ambiance and become the proper way to enjoy it — definitely not a loud and noisy show floor, and I wasn’t about to put on the headphones that 1000 other people had worn that day.

When the game releases during the Summer of Arcade later this year, you can rest assured that I’ll have the optimal settings on my television to enjoy it.