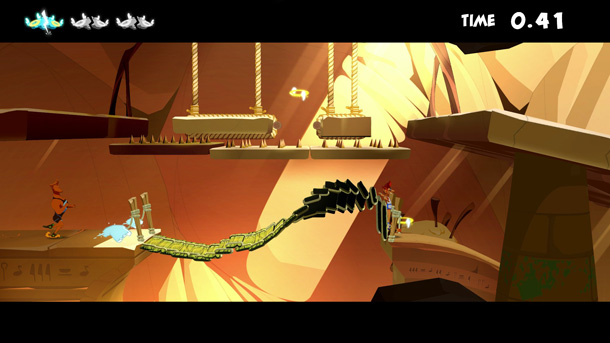 The life of a guardian must be a tiring thing. Watching out for their chosen human beings, keeping them away from danger, rescuing them from deadly spike pits as they compete against each other in the ultimate obstacle course… maybe I should back up a bit.

Of the many, many indie games on display at PAX Prime this year, few seemed to be generating as much positive buzz as Moon Spider’s upcoming half-racer half-puzzler Harold. Originally slated for the Nintendo DS years ago, the game has since been beefed up for a full-scale downloadable release, a decision that CEO Loris Malek hopes will allow them to bring a “triple-A” level of polish to the adventures of the bumbling titular character.

“But who is Harold?” you might be asking. He’s the lanky, nerdy goofball that you’ll be helping to cross the finish line, but you’re not actually playing as him. Instead, players assume the role of Apredes, a lazy guardian angel at the top of his “angel high school” class. For their final test, all angels must complete a centuries-old obstacle course race, selecting humans to participate in the deadly trials for them. While his fellow classmates were off selecting the strongest and most athletic individuals, Apredes ended up paired with the ever clumsy Harold. 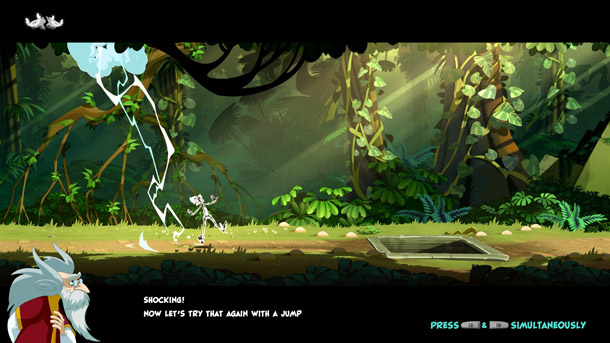 The red-haired runner finds himself in perilous situations time and time again, always starting in last place due to some heinous angel trickery. That’s where Apredes comes in. While Harold moves across the course at a constant clip, occasionally sped up by errant bolts of lightning, your guardian angel abilities are used to affect the environment he travels through. Moving platforms over bottomless chasms, bopping hungry crocodiles on the head and snapping bridges like rubber bands are all within your repertoire, and these can be used to help Harold or hurt his opponents. Levels have multiple pathways, and it’ll take quick thinking and a quicker reaction time to get the gold.

After a brief tutorial I was able to give the races themselves a shot, Malek offering tips and commentary along the way. There’s a bit of a learning curve to being a guardian angel, and having to adapt to controlling the environment rather than the character himself is a strange but enjoyable change of pace. It took a few attempts, but I was starting to find my groove, managing a respectable third place and qualifying for the next race.

That’s when Loris offered to show me how he plays.

Like similar runner games, there’s an element of memorization to Harold, a measured repetition of the levels that allows the player to lower his lap time and screw up his opponents even further. Compared to my patient as-it-comes attitude toward obstacles, Malek’s approach was close to watching an entirely different game. Frantic peeks ahead at upcoming obstacles, a cutthroat precision when it came to halting the other racers, bolts of lightning called down from the heavens time and time again, propelling Harold to the front of the pack and through several shortcuts. Each shortcut came with a clever cutscene showcasing Harold’s continued bad luck. While Moon Spider wants everyone to complete the game, placing first in each race will require significant investment. 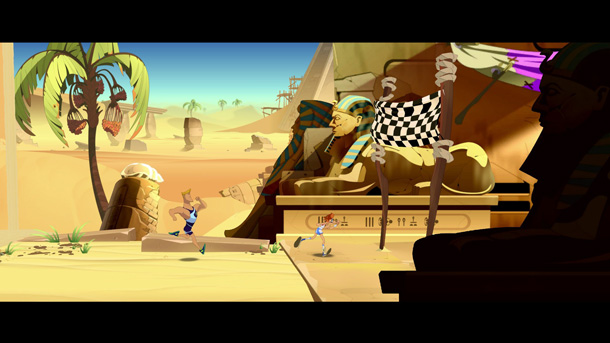 All the mechanical facets of the game are interesting and refreshing enough, but Harold’s true centerpiece is its jaw-dropping and fluid art. The bright colors and elastic style is a blend of 2D and 3D whipped up by a team of animators from outside the gaming industry, hailing instead from Dreamworks, Studio Ghibli, Pixar, Disney and other studios. The difference in talent shows itself in every frame of the game, with exaggerated characters and an elasticity to action and animations that seems unique to the title. Models transition from 2D to 3D and back at will, a seamless process that required the game to be slowed down to a crawl before I could even notice it. At that speed, characters stretched and compressed in a Chuck Jones-esque manner, arms and legs flailing about in whimsical fashion.

Harold evokes hints of Rayman Origins, but strikes enough of its own flair to feel original and fresh. A large part of this is due to an environmentally-reactive soundtrack, which remains just as colorful and bright as the game itself. Play better, and choral arrangements will appear, with booming timpani drums and strings to accompany. Getting into first and hearing the game react to your progress is a wonderful feeling, and drives a person to want to keep trying for that gold medal.

While the game will be an entirely single-player affair, the standard leaderboards will offer a little bit of a twist as well. Players will be able to upload videos of their own runs, showcasing their exploits and hopefully allowing others to find the shortcuts tucked away in each level. If nothing else, it’ll be a great way to learn how to better your own performance without resorting to YouTubes.

For a game I had heard precisely nothing about prior to sitting down with it, Harold caught me off-guard and never let me regain my balance. By combining an unflinchingly gorgeous art style with one of the more clever twists on an established genre, Moon Spider seems to have one of the most interesting titles to come out of PAX this year. I just hope Apredes has some headache medication handy.

Harold is releasing “early 2013” for PSN and XBLA.