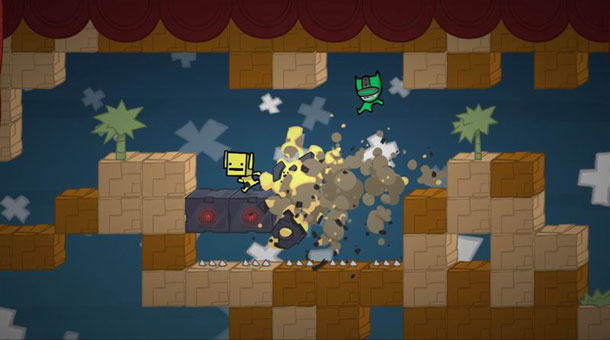 The Behemoth is a developer that doesn’t mind showing their games early. If you were at an event a few years before Castle Crashers launched, you likely saw and/or played an early build of the game with a very different take on the character designs.

It has been no different with BattleBlock Theater, the still-in-the-works latest game from the team. The last time I saw BattleBlock was in 2010, and there didn’t seem to be much game there. What a difference a few years can make.

The build of BattleBlock Theater shown at PAX had taken the core mechanics that I saw a few years back (platforming, attacking, and helping the other player) and fleshed them out. Rather than just aimlessly jumping around a level, this build was a series of rooms, each with it’s own challenges and hidden gems to find designed around two players helping each other out.

At the start of a round, you set up your character, choosing what head they have, which seems to be purely cosmetic (Dan Paladin’s art once again shines here), and what projectile they use, which isn’t. I picked what I thought was a flying saucer, but turned out to be an attack that was thrown like a Frisby, then became a mine when it landed. The second player, my brother Jesse, picked what looked like a top-hat on it’s side. This ended up being a sticky dart that you could then jump on to get to higher ground. While the different weapon types didn’t drastically change our strategy, there was a particularly difficult platforming section we were able to skip the majority of thanks to the sticky-dart platforms. This was important because you are also on a timer for each level, so moving quickly was an important part of gameplay. 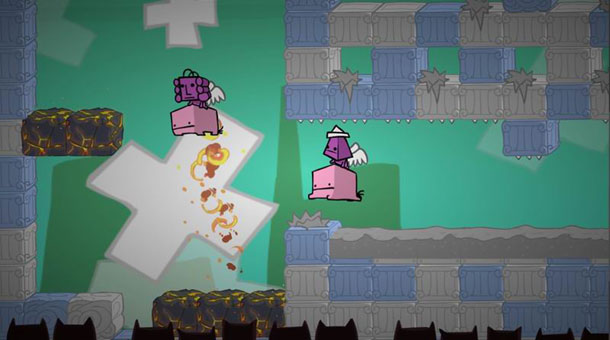 Each level also contained three gems and a ball of string that you could find. While it was usually pretty obvious where the optional collectibles were in a level, getting to them sometimes required a bit more finesse than just blasting through to the next room.

Death is more of a minor setback and wastes your time more than anything. If you die, you start back with your friend. If you both die, checkpoints are very generous.

The levels are full of traps, switches, enemies, and simple puzzles that more often than not require both players to work together to get through. You can stand on the other player’s head to get to higher ground, then use the help button to pull them up to your level. You can also use the help button to throw the other player across otherwise uncrossable jumps. For the most part, they were easy enough that no actual communication was required to solve them. A few upped the challenge and we had to verbally communicate to get through.

I bring this up because the thing that stuck with me about BattleBlock Theater was that this is a game I would someday be playing couch co-op with an actual person in the same room. You know, the thing we all used to do and love back in the day but most modern games require two copies, two consoles, and a gold account when playing on a certain Microsoft platform?

This realization made me very excited to play more of BattleBlock Theater, whenever it is that The Behemoth gets around to finishing it.

BattleBlock theater does not yet have an official release date, but has been confirmed as an XBLA title.