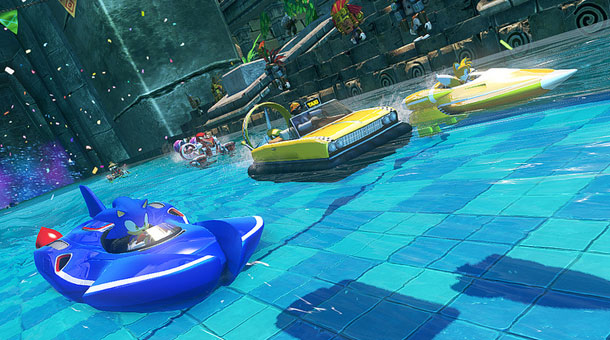 When Sonic & SEGA All-Stars Racing dropped in 2010, most people weren’t expecting much more than a re-skinned Mario Kart. SEGA managed to put their own flavor into the game, give the mechanics a unique feel, and pull off a pretty successful kart racer that I enjoyed a heck of a lot more than the last several installments of Nintendo’s franchise.

Once again up to their old tricks, SEGA seems to have looked at what Nintendo did in the last iteration of Mario Kart and say, “I can do better.” This new entry from SEGA features transforming vehicles that drive, fly, and even become boats.

Haven’t we seen all this before?

I really wanted to get a feel for what they were doing to set themselves apart with Sonic & SEGA All-stars Racing Transformed since the basics of what has changed are obviously one-to-one with the competition. I was happy to find the kart racing still felt solid, since this is still the main mode of transportation. You can still drift to get a speed boost, get and use a variety of goofy weapons to help gain an edge over your opponents, and still not have to worry about that damnable blue shell that other franchise insists on putting into their games. 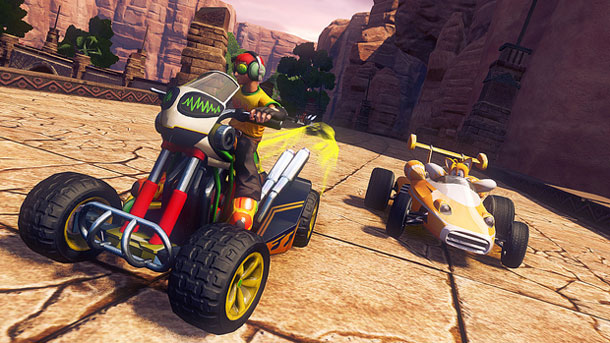 When my cart, driven by Vyse from Skies of Arcadia, first turned into a boat, the controls felt instantly familiar. Not because of other kart racers that have used boats, but because they gave these section a very similar look and feel to Hydro Thunder, the classic Midway arcade title that I played for countless hours on my Dreamcast. Right down to the waves, which you can use to get airborne, the same thrill I had from the older title was encapsulated in a brief segment of a larger, more varied race.

The air segments felt equally as polished. While drifting still seemed possible, it was a lot harder to pull off while flying. You could also gain momentum from dives, but you had to be careful not to lose too much of your momentum when re-gaining altitude.

What really stood out was how seamless the transition between the different vehicle segments were. When switching between each of the transformations, I never felt lost as to how I should be controlling the vehicle. They all had the appropriate feel to them, and I was instantly able to grasp what I should be doing to continue on my way to the finish line.

The levels, which are appropriately themed in fanservice to SEGA’s franchises of old, really keep you on your toes. Not only are there the hazards that you would expect from a level in a kart racer, but the two levels I demoed both had landscapes that changed between each lap. In the level themed after Panzer Dragoon, the landscape changed so dramatically that it actually changed which vehicle you were in on what part of the track. In the Golden Axe level, more and more hazards, such as axes swinging from above and trying to knock your car off the track started to appear the farther into the race you were.

Sonic & SEGA All Stars Racing Transformed, while quite the mouthful to say, is definitely a release that fans of the kart racing genre should keep their eyes on.