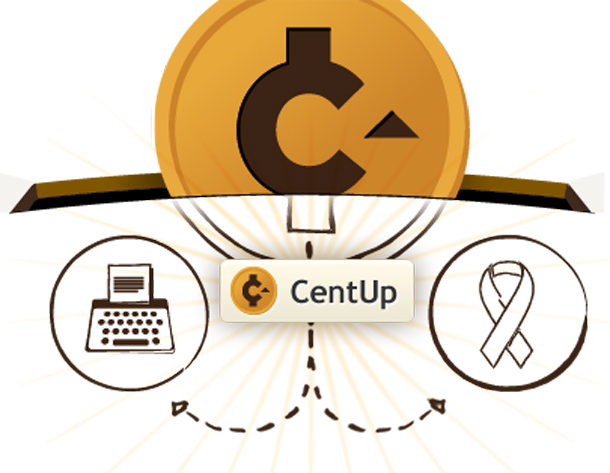 We have some great things planned for LaunchPad in the coming weeks. We will definitely be touching on how to get funding for your website or project in depth, but before then I wanted to bring up this great little initiative taking place. I spotted CentUp being mentioned on Twitter and subsequently found my way over to it on IndieGogo over the week.

Essentially, CentUp is a way for content creators to get paid on an almost “tip”-like basis, but with a catch. Readers or viewers can read an article, flip a few “cents” to the creator via a quick button, and viola! Content creator is paid! The exciting part to me is that half of the proceeds also go towards a charity of the user’s choosing. “To start, CentUp will offer six charities that the community can pick from. They will range in issues from education to food to women’s rights to developmental health,” said creator and founder Len Kendall to us in an interview. The number and variety of charities will increase, but the team behind CentUp doesn’t want to scale it up too fast, to avoid any dilution of funds that can occur. That means, perhaps, that charities like Child’s Play could be added down the line.

Trying to leverage advertising with content can be a pain sometimes, especially understanding where to draw the line between one or the other. “From an advertising perspective, we hope that CentUp will offset publisher’s need to advertise as much,” Kendall says. That’s where CentUp has an advantage: users will tip you if your content is good and relevant to them, which could force more creative, interesting work from creators and site owners who can rely a bit less on trying to include advertising and focus more on work.

Create good work and get funded, as well as helping out charities. Sounds like a good proposition.

There is just under one month left for CentUp’s campaign on IndieGoGo. Their goal is to get to $25k.

*Disclaimer: I think CentUp is a pretty dang good idea, so I just donated as well.