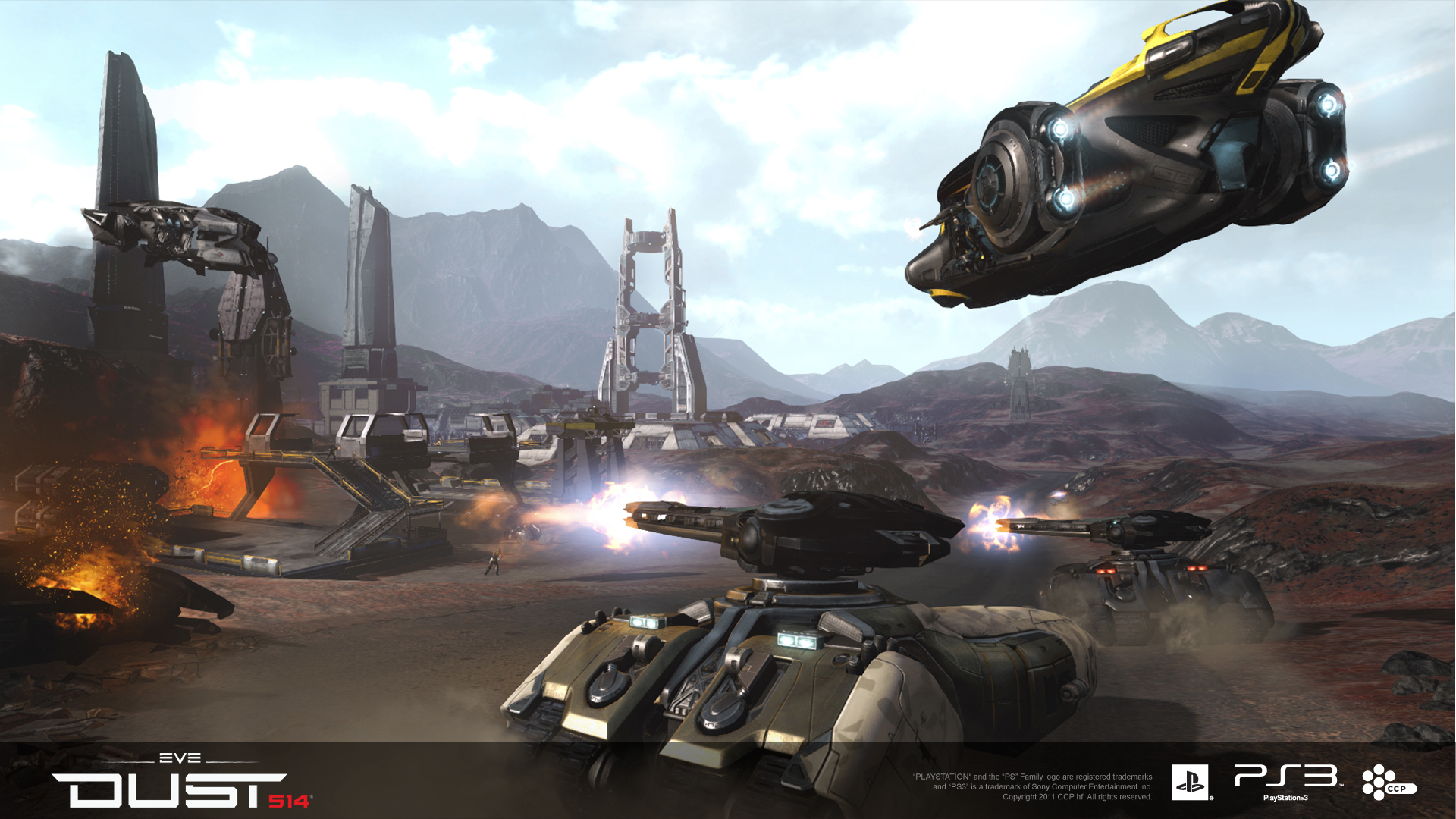 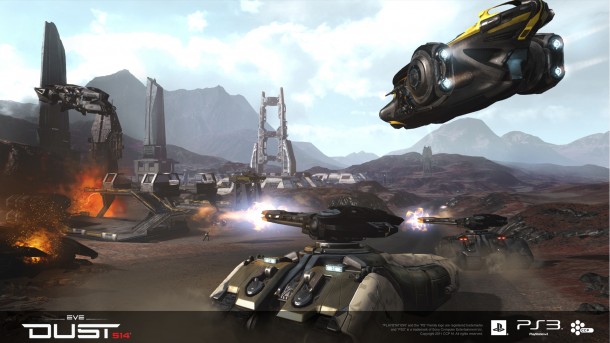 Instead of doing a traditional review of Dust 514, we’ve decided to break up our impressions in this weekly review diary. Each entry will focus on different aspects, in order to better gauge the huge and evolving nature of the MMOFPS. Once you’ve finished reading Part One, feel free to check out Part Two.

[dropcap]D[/dropcap]ust 514 has been trading on a promise — bringing a palatable entry point into the world of EVE Online in the form of a simple first-person shooter. All the treachery and robber-barony of EVE can finally be enjoyed by those who find “spreadsheets in space” unappealing, at least according to developer CCP.

As someone who’s played more than his share of EVE Online in his time (several thousand hours), I can say that the similarities between the two is, at times, uncanny. Basic components like the marketplace and equipment interface are taken directly from Dust’s PC counterpart, and actually improve upon them in several ways, both aesthetically and functionally. In fact, CCP would be smart to implement some of the ideas on show – such as purchasing multiple fittings with a single stroke – in the original.

More importantly, and less obviously, Dust makes use of its progenitor’s evolving, player-defined combat roles. Unlike games such as Battlefield – from which Dust clearly draws much of its inspiration with a focus on open-air, vehicle-heavy arenas and node capturing – there are no strictly defined roles. The classes are instead handled by the players, who have already created their own dictionary of necessary roles and command structure. 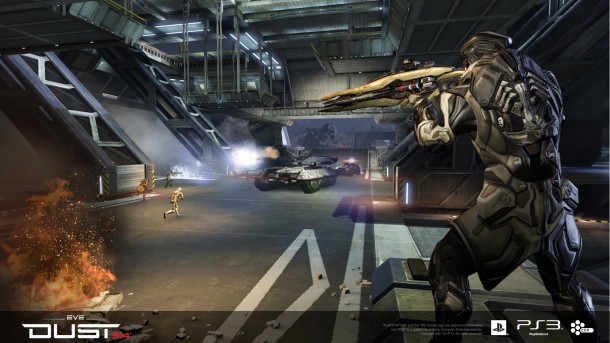 This is thanks to the “dropsuit” feature, which allows any player to build their character from the ground up by fitting things like utility items, shield modifications, different weapons, etc. While different dropsuits definitely excel in different areas and benefit different tools, there are a few rules regarding what they can and can’t use. For example, someone wanting to deny enemy advancement toward a location might equip a weapon with low, but sustainable damage, like the laser rifle, to harass would-be usurpers. Depending on player preference, however, they might choose a fitting with high survivability and low mobility, making them something like a living sentry turret, or they might fit themselves for high movement speeds, but low health in order to scale hills and structures, and keep out of harm’s way entirely.

Like EVE Online, these distinctions can become incredibly granular, and while here it isn’t as complicated a procedure as in that game, it’s likely to be very overwhelming to new players. However, the trade-off is a high degree of flexibility compared to average shooters, and a translation of EVE’s player-driven world into a more focused genre.

Squadding up with a communicative, well-organized team that can fulfill these roles is absolutely vital. Without one, you’ll likely find yourself hoofing it across slightly too-big-for-the-player-count battlefields, looking to pick a fight until you’re inevitably ganged up on the moment you find a sustained firefight. Dust, much like EVE’s own PVP, mocks lone-wolves. Everyone has a role to fulfill, and a greater objective to achieve, even if that objective is only to shoot dead 50 of the other fools what chose a different color banner than you. Thankfully, the game’s clan system, or “corporation” system, makes finding kindred players incredibly easy, and actually adds a great deal of value to the game even outside of combat (but more on that in my next entry.)

In point of fact, I’d recommend not playing Dust at all sans a group of like-minded fellows, as doing so can be nothing short of excruciating. That’s seen to by another carry-over from the PC game – real-time skill training. 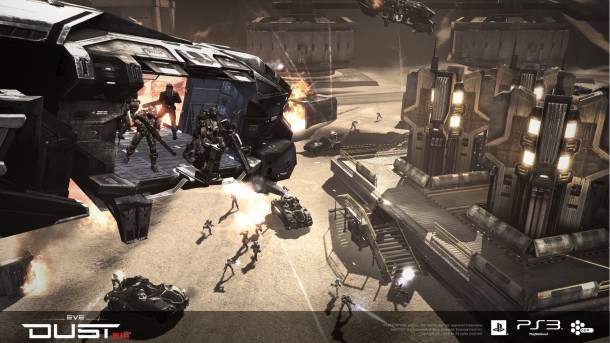 In Dust and EVE, skillpoints for different abilities are accrued over time, whether you’re playing the game or not. In EVE, that means queuing up specific skills to train over hours, days, weeks, or even months. In Dust, skill points simply dump into a pool, and can then be applied to any skill once you have enough to unlock a particular level. These allow the use of higher grade equipment, or provide a small percentage boost to things like accuracy, shield recharge rate, etc. The rate of accrual is (and I don’t think I’m exaggerating when I say this) almost comical. Skill point inflation skyrockets on each ability every time you unlock the next level. Making things worse, the bump in efficacy for each skill level rides between 2-5%. Some skills don’t even offer that much, giving no benefit at all except at certain levels, and serving only as a buffer to keep players from using better equipment too quickly.

In EVE Online, a couple of percentage points added to a battleship’s massive armor tank can be the difference between life and death. In Dust 514’s downscaled playground, it’s difficult to notice. Unfortunately, without these upgrades the core shooting and moment-to-moment gameplay is intentionally unwieldy, making it necessary to upgrade early and often, but also in such a way that you don’t waste points on a style of character you don’t want to play as.

Mercifully, participating in combat will allow you access to a weekly supply of bonus experience. The better you do in a match, the more experience you scoop off the top of the pool. As a basis of comparison, however, know that a week’s worth of combat experience is just barely enough to buy the third level (out of five) of most mid-tier skills.

I know that, based on this first entry, it sounds like I’m altogether ambivalent about Dust. I decided to write this first review diary concerning Dust’s basic structure to better inform those looking for a mid-season Call of Duty replacement; which this is not. Dust 514’s greatest strengths are in its community, its ties to EVE Online, and nature as a social hub first, shooter second. If that’s not what you’re looking for, then I urge you to look for something else. If that doesn’t scare you off, however, then check back for the next part of my review diary soon.

This review diary is based on a copy of the game downloaded for free from the PlayStation Network.