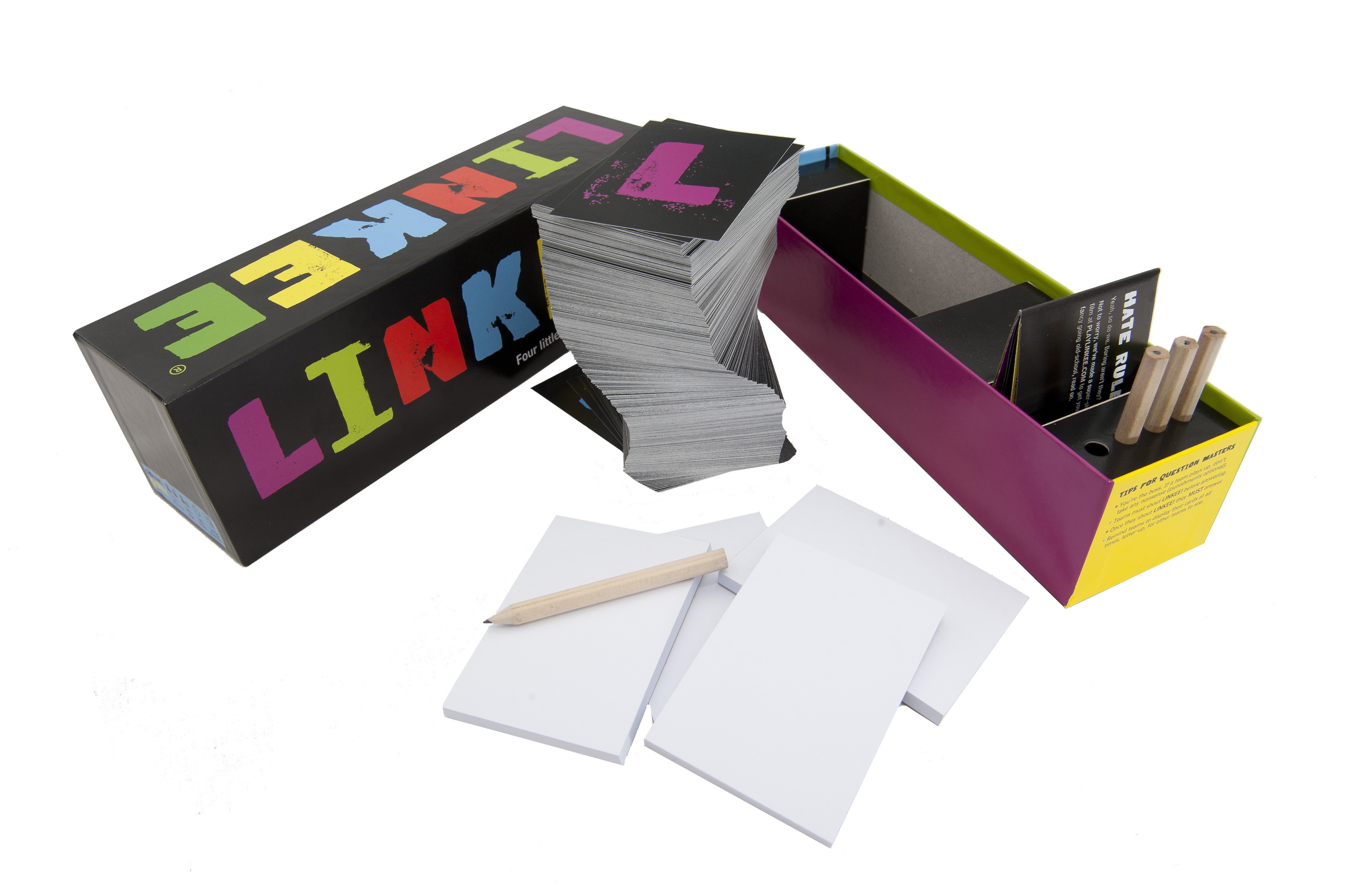 Over the last year, Dylan’s developed an unhealthy addiction to finding the latest and greatest card and board games. While his bank account dwindles, you can rejoice in his write-ups of what’s now crowding his bookshelves and kitchen cabinets. This is A Board On Which To Game.

If trivia games are the shallow end of the abyssal pool that is board gaming, Linkee sits a step or two past the point where your feet can touch the ground. What it accomplishes with its clever, collaborative spin on trivia will be dulled somewhat by a largely Eurocentric question pool, but at the very least Stateside players will find themselves learning an awful lot about European culture. The amount of fun you’ll garner from the experience may vary, but Linkee thrives as an enjoyable diversion from the archaic Trivial Pursuits of yore. 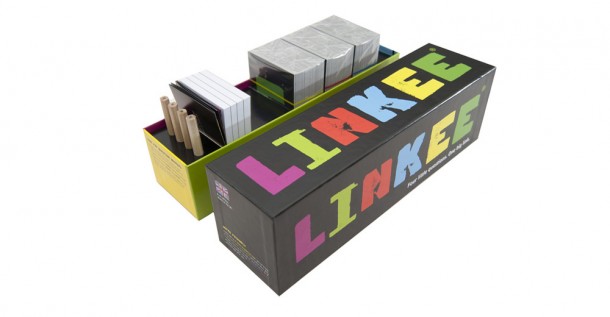 To start, Linkee’s setup requires little more than opening the box, handing everyone pencils and pads of paper, and slamming down a towering deck of some 350 cards, their backs all emblazoned with one letter of the game’s title and central callout.  Capturing enough cards to spell the word wins the game… but it’s not quite that simple. These cards all contain not one, not two, but four(!) questions, the answers to which are linked in some obtuse or pointed way. There’s no letter-to-category equivalency here, with cards carrying topics as diverse as the day is long. As a result, figuring out that central answer and shouting “Linkee!” doesn’t require a deep understanding of the subjects that get cropped together. You might not know that Oxford hosts the dreaming spires, but if you piece together Ali Baba’s “open sesame” and remember that Wall-E was a Pixar movie, finding the link “street names” isn’t too far off.

Of course, not every card is so on-the-nose with its links. While long stretches of comparatively easy cards can be found, with successful links leading closer to victory, each session we played came to a screeching halt once or twice when we were questioned about Britain’s ferry ports or what Hartley’s produces — jam, as it turns out. This is a specific issue of localization (Linkee Limited is a UK company and I’m a ruddy Yank), but the excitement and willingness to continue can be lessened a little if you’re playing with a large group of people who’ve never heard of snooker, let alone Jimmy “The Whirlwind” White. The easy solution? Split these Eurocentric cards aside from the pack beforehand and you’ve got the makings of an easy-to-learn, uproarious little batch of trivia. 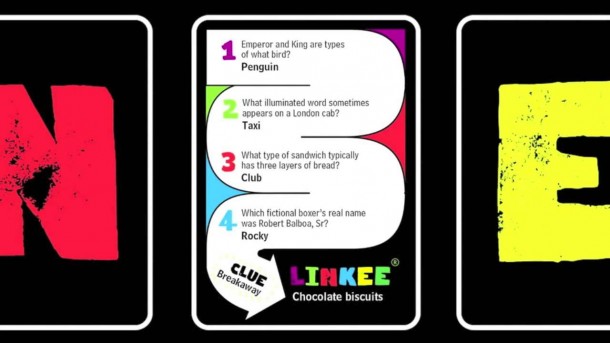 Linkee scales upward well, with a recommended 3 to 30 players in solo or team set-ups, but it lends itself better to smaller solo games or smallish teams: anything over eight individual players or three teams of four started dragging matches out to an unnecessary extent. There’s also a two-player version which involves both players reading and answering questions simultaneously, but there doesn’t seem to be much impetus to go down that path unless you really want to know how much your singular friend read up on England’s 1966 World Cup Squad. As an opener for a game night, it’s a good way to get people into a strategic sort of mood, as a bit of planning and collaborative thinking has to come about when you’re going at the questions with your friends.

Trivia tends to be a total bore or an insightful event, and trivia games don’t generally have the strength to change that initial impression. Apart from the age-old, expansion-pack-laden mainstay that is Trivial Pursuit, the only other game worth noting within the last few years has been Wits and Wagers, which has gone on to see a torrent of spin-offs and question packs of its own. The folks at Linkee Limited have opted for a crowd-sourced development plan: a significant quantity of cards in the box bear the names of their original questioner, and the trading reference cards point to a website where fans can upload their own links for inclusion into future versions or expansions. Given how dark the Internet can get, it’s hard to tell what form Linkee’s future will take, but if the initial batch of solicited questions are any indication, sunset is a long way away. 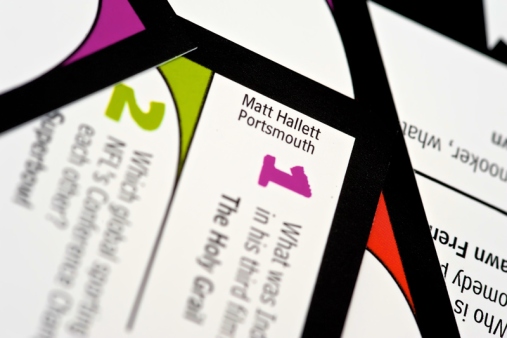 With Linkee, the aptly-named Linkee Limited has managed to put a new spin on a style of game that’s been forced to rely on pie pieces and meeples in the past. Breaking away from category-specific cards allows everyone to take a stab at just about any question, and while there are plenty that will leave an American player scratching his or her head, enough content sits in the box to last for some time. It doesn’t hit every mark for a guaranteed recommendation, but Linkee often manages the right level of cleverness to consider adding it to your collection.

Linkee was reviewed using a sample copy sent to SideQuesting by the publisher. It is available for purchase from Firebox’s website.