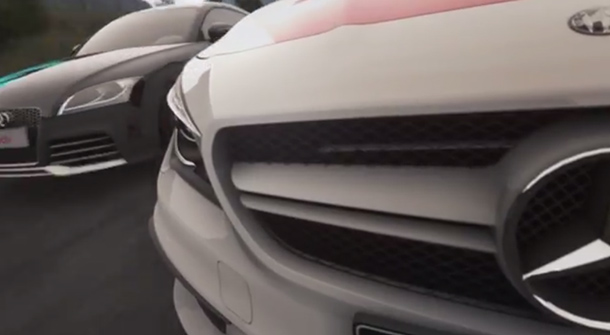 I couldn’t have been any less excited for Driveclub for the PS4 prior to my hands on at E3 this week. I’m (personally) a die hard Forza and GT fan, owning the majority of the games in each of those series and placing them on console racing pedestals not reachable by mortal standards. I wasn’t impressed back in February when the game was announced for the console, and the trailer at Sony’s press event this week didn’t solidify anything for me.

Driveclub isn’t a simulation racer, though the vehicles behave like their real life counterparts. The game is based around multiplayer racing, with missions and challenges along the way. Each player selects a “club” to join and any points gained end up as part of the team’s total. My team was in 2nd place amongst the entire E3 groupings, and needed some serious points to catch up. Thankfully I’ve been ready for a new racing game and had itchy trigger fingers. We used PS4 controllers, which we’ll do a followup post on after we’ve tried it on a few games.

As our race started, my opponent was seated next to me. I had a McLaren MPC and he a Hennessey Venom. The light turned green and the duel was on. Around the second turn, a notification popped up that informed me of an impending Face-Off Challenge, the game’s point-gaining competitive portion. Points can still be earned by just completing races, but the challenges can add to the final totals. The first challenge was to efficiently corner around the turn. I saw my opponent  take the corner too fast and crash into the wall, leaving dents and deformations in his bodyside, while I expertly took the turn. The tally: 450 for me and -180 for my opponent. The next challenge along a slight s-curve required us to get the highest average speed. The Venom is naturally a quicker car than the MPC and took that crown 300 to 100.

The final challenge of the race asked us to drift as long as possible. Though my vehicle could corner better, it also couldn’t get match the speed of the Venom. As he sped around the corner, I caught up behind him just enough to watch his movements and see what he was doing wrong. By pumping the brakes he wasn’t able to get a wide enough arc to drift well, and ended with only a slight slide. I, on the other hand, used my momentum and let off of the brakes completely, leaning and tilting the sticks to let the car drift effectively.

400-80. I slaughtered him, and in the process put my team’s collective score almost to the top of the leaderboard, just a few points shy of first place.

Driveclub‘s social emphasis and arcadey feel add a lot to the game to let it stand on its own. It can’t compete with Forza’s or GT’s realism, or Most Wanted’s chase sequences and “always fast” nature. Instead it seems to push towards a driving genre that emphasizes smaller victories adding up to a greater good. It has great controls that give a better sense of speed (thanks to the adjusted camera angles) and less of a commitment to progression than the more realistic games. Driveclub should be a solid racer for the PS4, when it launches alongside the dive this Holiday season.