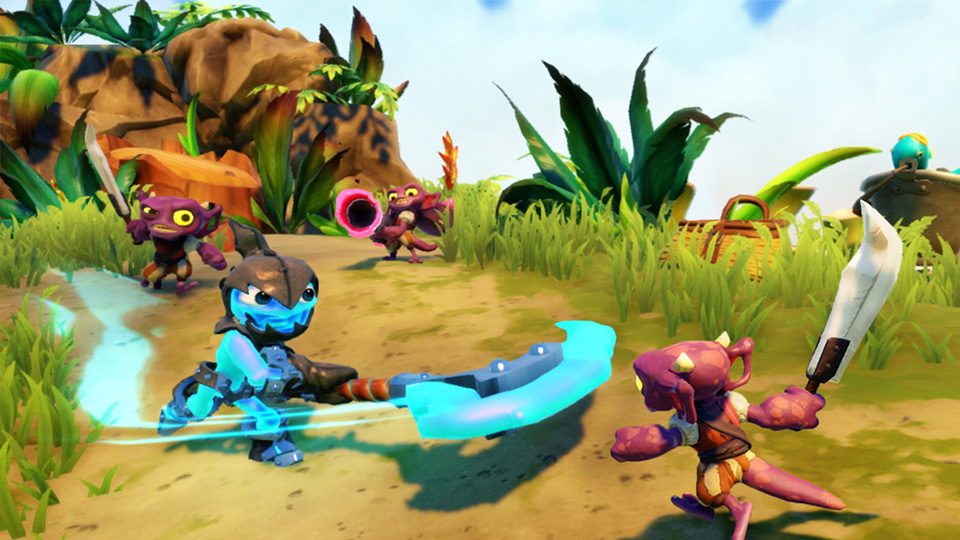 I’m happy that Skylanders is an annualized game. I’m happy that every year, while massive Triple-A games are releasing and new consoles are launching, Skylanders comes back to take up more of my diminishing shelf space. I’m happy that I can stop by Best Buy on the way home from the office and buy a figurine on impulse, simply because of how cool it looks.

That statement isn’t uncommon; the Skylanders phenomenon continues to bring in record sales figures as fans lap up the new toys with each new wave of release, engage at big events at Toys R Us and other retailers, and are inundated with co-branded marketing at fast food chains and game stores.

The newest edition, Skylanders: Swap Force, doesn’t change that. It continues to bring highly-collectible figurines to market that kids and adults will buy up. The advantage this time around is that the game is actually really good. 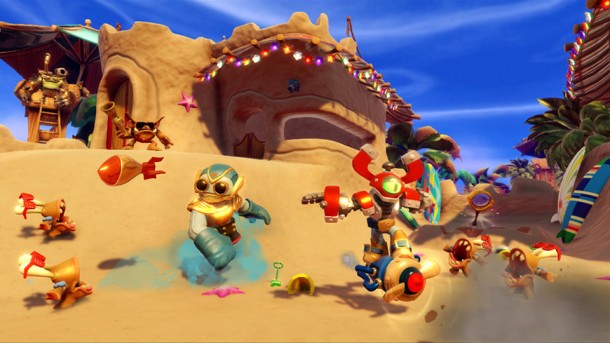 Most people who pick up Swap Force will more than likely already have an army of figures from previous iterations of the game. For the new player, the concept of dropping a toy onto the included portal and zapping it into the game will be easy to understand. It’s not rocket science, even though the technology seems like magic at times.

In the past the series has spawned glowing figures and massive “Giants” that dwarf the others, and this year’s version introduces yet another gimmick. Employing a mix and match philosophy, the toys are split in half, connected at the waist by a pair of magnets. The bottom half of the new toys adds a specific power while the top is more along the lines of a traditional Skylanders character. The halves can be swapped around, creating plenty of possible combinations and opening up different challenge sections within the game. Powers can add a rushing ability to an octopus or a climbing ability to a snake. I found my niche in Wash Ranger, an octopus head with the body of an eagle, and I think most players will find theirs as well. The magnets aren’t that strong, however, meaning that with a t shake the figures will separate. A day into owning the game, we had lost the top half of one figure, only finding it several days later tucked under a couch pillow. It’s also easy to develop a nervous twitch while swapping apart the figures, as an audible “SNAP” provides feedback that the halves are engaged.

The toys in general have been updated with new action poses and facial expressions, adding much more personality than the past generations’ simple gaping mouths. This includes more color and texture combinations, with no degradation of craftsmanship over the last generation. They’re still great look, great feeling sturdy pieces. There are no Giants this time around, no doubt due to their inherent lack of speed, but they’re fully compatible with Swap Force, as are all of the other Skylanders figures from the past games. They’ve all had their maximum levels increased, too. The only caveat is that a new portal is needed to utilize the the new Swap Force figures, meaning that you’ll need to have two portals to be able to play on the current and past games.

That’s not a big deal, though, since I’m more than comfortable with scrapping Spyro’s Adventure and Giants in favor of the new edition. Swap Force is the best Skylanders game, by far.

For one, Vicarious Visions — developer of the 3DS version of the games — has taken over production of the game from Toys for Bob. They’ve brought a lot of their handheld ideas as well as what worked in the first two console games into Swap Force. This means that gone is the confined “hub” ship of the last game and the town center returns. The town is alive, populated with enough NPCs to almost get annoyingly sidetracked by with mini quests or accidental conversation.

With Swap Force, Visions brings in their technical knowledge of game engines, maturing the visual aesthetic beyond what Toys for Bob was focused on. The primary colors are still there, but new texture maps hide some of the simple polygons of the levels. Lighting, shadow, and camera blur make the characters look more toylike on the screen, further enhancing the connection to the real world figures sitting on the portal. The game relies on an automated camera, which can sometimes cover crucial parts of the screen if out of alignment.

The levels are larger, and with some of the Swap Force challenges can take an hour to unlock every location and treasure within. Their design is enforced further by the addition of jumping to the console game. What may seem like a small feature (it’s available in virtually every other platformer in existence) is one of the most welcome changes to the experience. Stages and arenas are much more vertical now, allowing us to jump up to other platforms easily, avoid attacks, or take alternate routes to the goal. Jumping has become my go-to way to travel, as my finger seems to naturally want to continue clicking the button now.

For a game that relies so much on physical DLC to sell, it’s a pleasant surprise that the gameplay is as satisfying as it is. Though the amount of elemental and challenge gates can seem a little obtrusive at times, there’s plenty to see and do in each level and the game’s world. The characters can feel unbalanced at times — some don’t develop into powerhouses until they reach higher experience levels — but that’s easily remedied by tossing a different figure onto the portal. And, looking onto the shelf above my Xbox 360 at my growing collection, that shouldn’t be a problem. 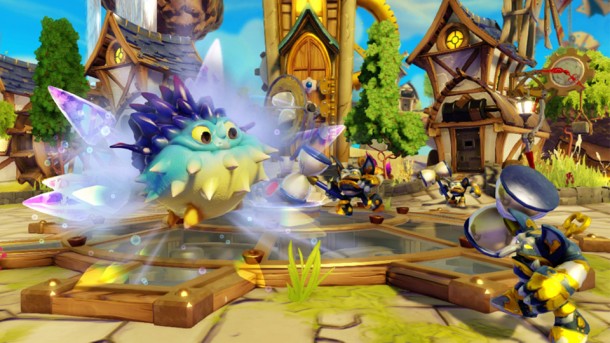 Swap Force offers a great deal of variety over previous installments. More than ever players can customize their favorite characters in new ways, developing the ones they like the most. The new unlockable challenges and minigames are great additions to the levels, offering branching paths and sub-goals to achieve as desired. For previous owners, it’s a lot of welcome changes that will extend the life of their collections of toys. For first-timers, it will feel like a fairly complete game and an enjoyable hook into the series. Either way, it remains a great game to play with kids, and continues to be an excuse for men in their 30s to run out to Toys R Us on Sundays to fight hordes of other parents for the latest figures.

This review is based on a retail copy of the game for Xbox 360 sent to SideQuesting by Activision.