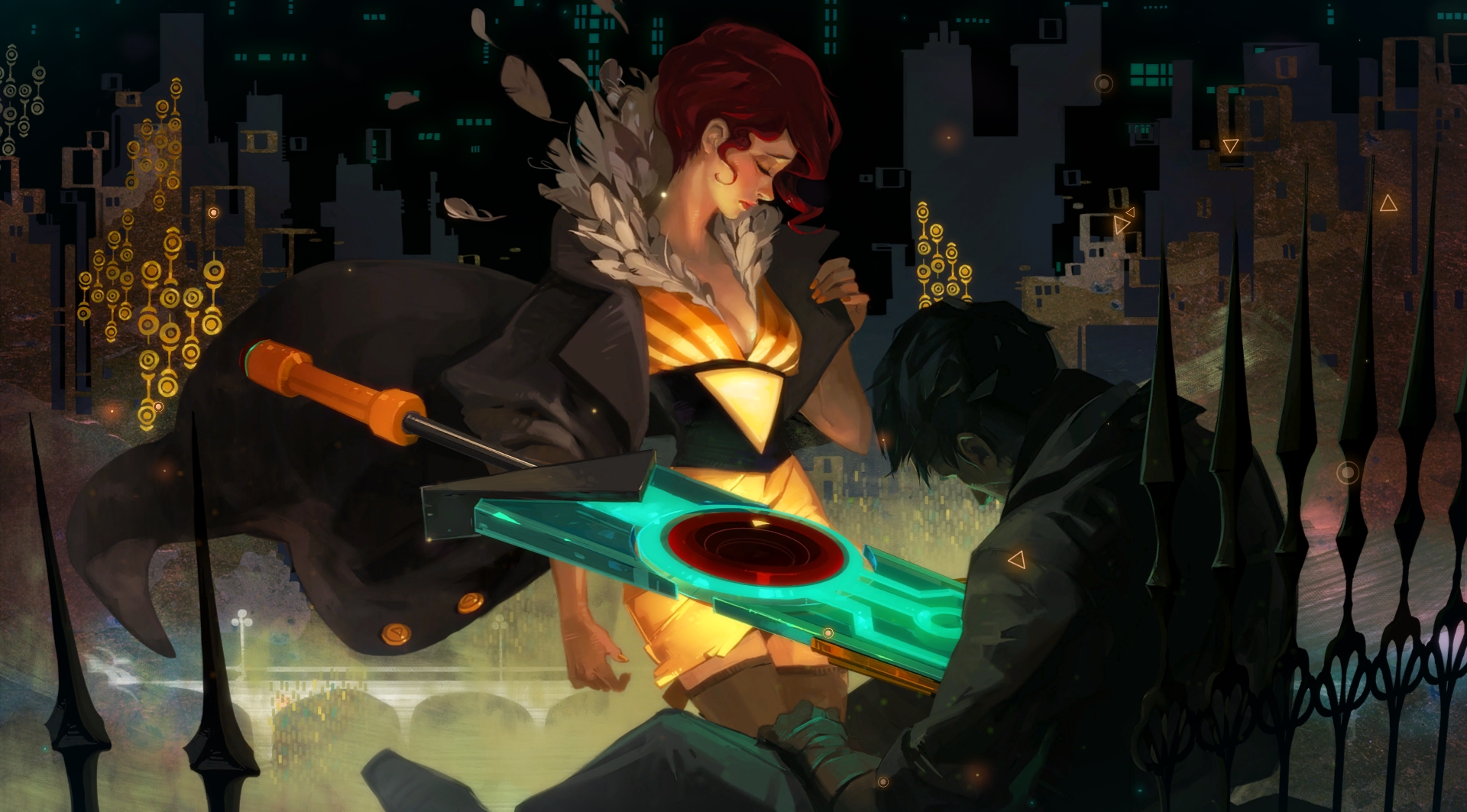 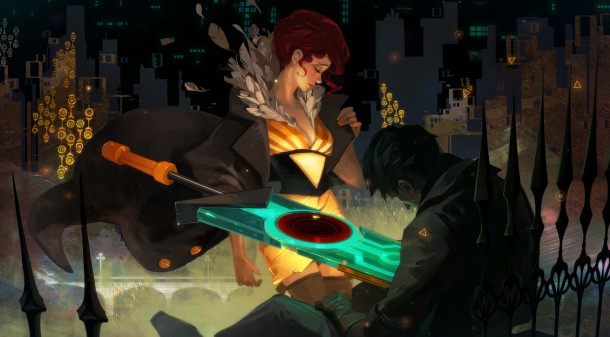 For the past few years, one big theme in game design has been fusing together old genres to create new exciting experiences. Small indie developer Supergiant Games has a winning recipe with Transistor as it brings us an isometric action game that’s heavily peppered with RPG and strategy elements. But with all those video game buzzwords aside, “sexy” is probably the word that comes to mind after trying Transistor at PAX East 2014. Its gameplay is sleek; its electronica-infused audio is stylish; and it’s definitely easy on the eyes.

Transistor’s protagonist is a techno-punk-themed woman named Red who brandishes a large sword and seems to have the power to learn new techniques from people’s souls. Red is guided by a man who also serves as the game’s narrator. When asked who this man was, creative director Greg Kasavin says that “he is clearly someone who has a past with Red and cares for her.” When proded further, Kasavin smiled and said that that’s all he wanted to say for now. 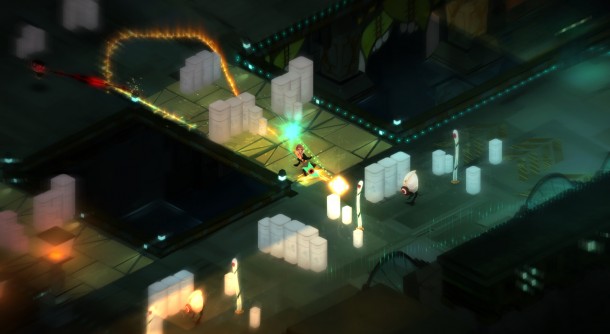 The techniques (or functions, as the game refers to them) can be mapped to the four face buttons on the controller. Of the functions available during the demo, I was able to use a heavy slash attack, fire a straight laser-like projectile, fire a short-range projectile that burst into pieces upon impact, and dash across the environment for mid-range distances. One huge draw for Transistor is the fact that these functions can all be upgraded in different ways as you level-up. During the demo, I was able to give one of my attacks a chain-reaction effect. Kasavin explained that as you progress further, you open up more slots within each function and you can combine upgrades. Towards the end of the game, the various number of unique upgrade combinations per function becomes quite large. 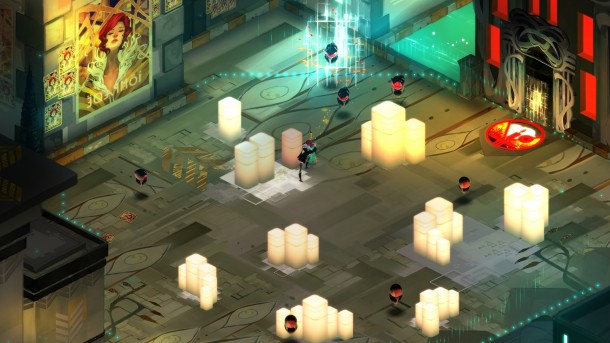 What sets the game apart, however, is what the gameplay does with its battle mechanics.

You can choose to fight battles two ways: the usual hack-and-slash method and devising a “plan.” The plan phase (literally what the game calls it) introduces a real time strategy aspect to the game. In video game jargon, this is the strategy element that Transistor brings to the table. But essentially, you’re pre-recording your next moves in battle, and it’s a brilliant answer to bringing a strategy element to an action game.  Hitting R2 on the controller pauses everything on the screen except for Red. It’s at this point where the player can program the next few moments in battle and have Red move and do whatever attacks the action meter will allow. After the plan is executed, it takes a few seconds until you can plan again. Kasavin said, “we’re trying to hold back on providing tutorials for the player, and we want to hold your hand as little as possible. Our goal is to make sure that you figure out how to play on our own as you go on.” The game does not force you to fight a certain way, but how can you not play with this mechanic? 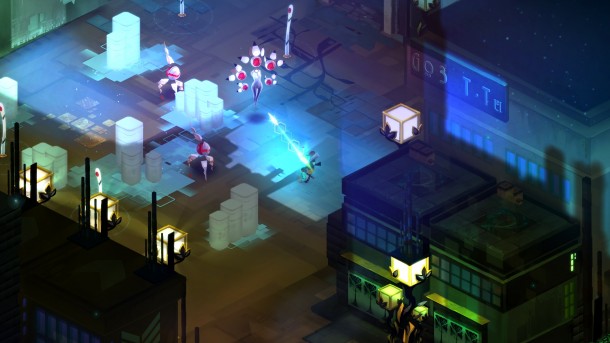 Boss battles require some more thought. Bosses seemed to be able to dodge certain attacks during my plans. But with some more chugging, they were taken down. This bump in difficulty was appropriate for a boss battle; it makes it so the RTS element isn’t over-powered.

Aesthetically, Transistor is a joy to experience. Its “half-anime,” cartoony art style is beautiful and reminiscent of Odin Sphere. What’s even more notable is its unique choice of music. Transistor’s trance-themed soundtrack is super-appropriate for the art style and setting. It’s perfect. 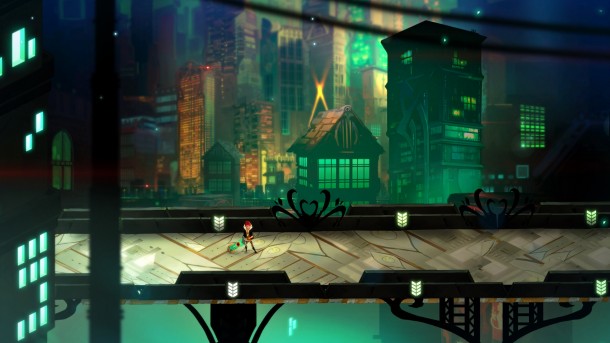 Though Transistor has been at PAX East since 2012, I’m glad today was the first time I played it because it comes out soon — May 20. To word it poorly, Transistor is a game that just makes you “feel cool.” The art style, planning mechanic, and music all complement one another brilliantly and provides this cyber-punk feel that Supergiant Games seems to be going for. Transistor was a truly fresh experience, and it’s probably worth the effort to keep an eye on this one as we approach its launch date. At launch, Transistor will only be available for PS4 and PC. When asked about whether it will be available on other platforms later on, Kasavin said “well, you see what happened to Baston. We’re a small studio, and we’re just doing what we can for now. So never say never.” 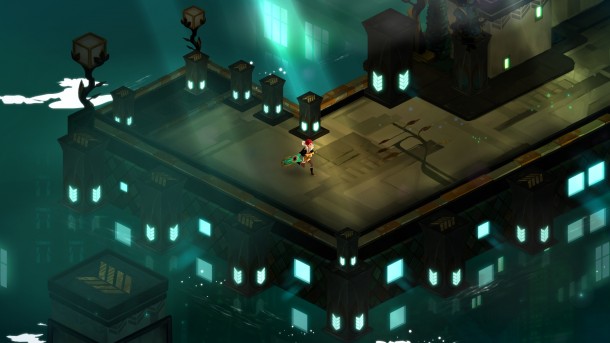