Our love of Skylanders is legendary. We’re fairly certain that it’s unhealthy, too. Sweet-looking collectible figurines? NFC technology? Upgradeable? Diablo-like? YES, PLEASE. But guess what else? We feel silly walking into a Toys ‘R Us on a Sunday morning just to be able to buy the newest figures released. We still do it, though. We’re suckers.

Hanakai Studio hopes to capitalize on that addiction through their newest PC game Prodigy. Much like the growing genre of “place figure on device” games, Prodigy revolves around the placement of NFC-powered toys and objects on a playing board. But, there’s a bit of a difference with the game that might not make us blush (as much). 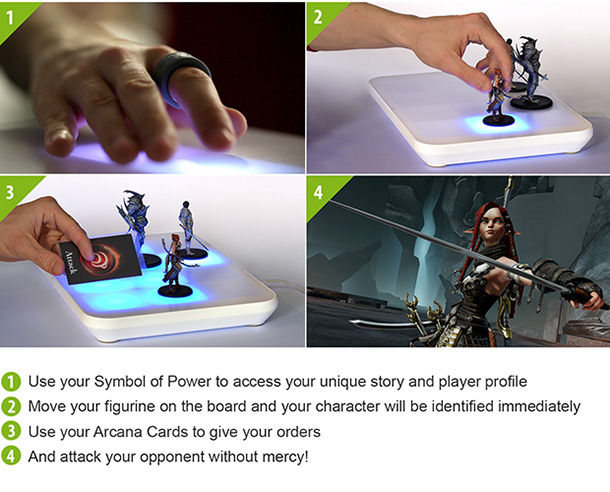 For one Prodigy is a tactical RPG, designed with the genre’s conventions of PVP, bosses, magic and attacks in mind. It’s not just about dropping the figures on the board, but where: the game’s play field has several specific “zones” on which characters and cards are placed, causing them to attack and defend in certain ways. Parties can be created, which include bosses and “legend” support. The variety cards provide all manner of advantages and conditions as well, further mixing the results for or against the favor of the players.

But the most attractive feature of the game seems to be the figures themselves. They’re designed with a much more mature art direction, appearing more like classic fantasy RPG characters rather than child-safe cartoons. Some look downright brutal, like the design for Toboro.

I cannot wait to try this game out at PAX East next week, where the company will be showcasing the latest build. They’re up on Kickstarter right now with the project, offering up some sweet rewards to backers that will *really* help out in game.

Images and information via Hanakai Studio