Equal parts visual novel and bartender simulator, Sukeban Games’s depiction of a post-dystopian, cyberpunk bar is both smart and compelling. The premise is disarmingly simple: as the bartender Jill, players take orders from NPCs and prepare drinks according to instructions. Each time an order is placed, a menu pops up that organizes the futuristic booze by name, style, or flavor. Drinks may be shaken, served on the rocks, or aged.

Making the drink is the easy part. Things become significantly more interesting once the patron reaches the bottom of their glass.

My customer in the demo was an anime-style schoolgirl named Anna Graem. Jill was not concerned about whether or not Anna was old enough to drink; she assumed that the girl was of age based on her composure and confidence. While making the drink, I could have prepared a virgin beverage, but I opted to trust Jill’s instinct. I mixed the drink, Anna downed it…and then seemed to violently glitch. I thought that my eyes were playing a trick on me, but it happened again. And again.

By the end of the demo, it was clear that Anna was not what she seemed to be. Though drink after drink loosened her tongue, giving me insight into her unfortunate history, the glitches–and, later, a shocking revelation from Jill’s boss–left me slack-jawed and utterly hooked. The patrons may look like stereotypical anime characters, but they often subvert and complicate those tropes in surprising ways.

In addition to playfully adapting familiar tropes, the game is also designed to act as a metaphor for the current economic situation in Venezuela. Primarily, its story is fascinated with what happens to humanity once the worst-case scenario has occurred. It makes sense, then, to have the story unfold in the bar, considering that many of its occupants could definitely use a drink.

The game play is highly intuitive. Colored bars make helpful indicators when determining how much of an ingredient has already been added to the drink; the drink “menu” makes it easy to select the best beverage for any situation. I was worried that the game would turn into a memory challenge of sorts, but the bar interface gives players power over their booze distribution without expecting them to memorize recipes. There are no dialogue options to choose from (Jill is very much her own character). Instead, players affect the outcome of each interaction through the drinks they serve. While some patrons may be very precise in ordering their drink, they may just as easily give cues about what they like through conversation, or, in some circumstances, it may be best to not listen to their order at all. 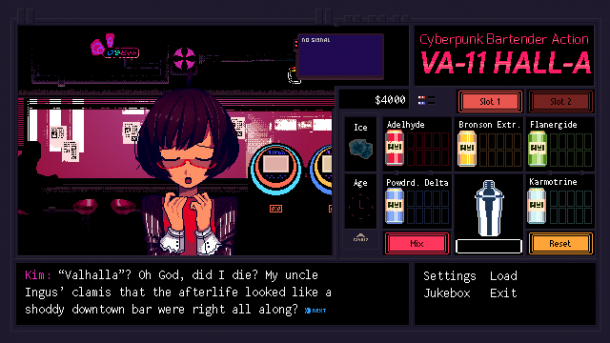 My brief encounter with Anna Graem was enough to pique my interest in the story and the characters themselves. The entire experience was delightfully reminiscent of a Christine Love game–and not just because of the anime-inspired aesthetic. The stories beneath the deceptively simple interface are much more complicated and social commentary-driven than they may initially appear. Atmospheric music and visuals contribute to a memorable experience, and somehow make the bar and its occupants feel real.

VA-11 HALL-A does not yet have a release date, but it will be released on PC, the Playstation Vita, and iOS.