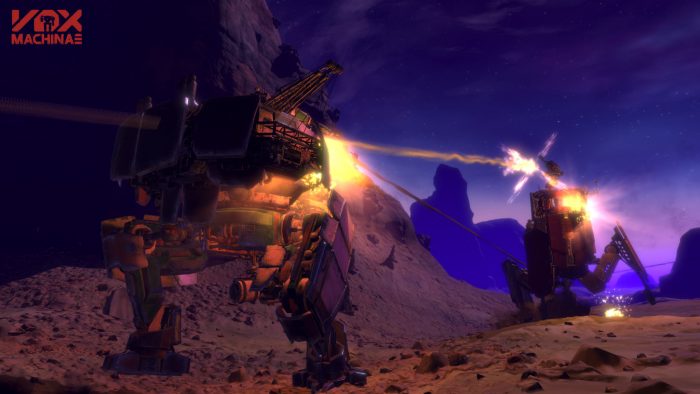 I have an overheating gun that needs to cool down. I’m standing behind a hill with an opponent around the corner, making his way towards my position. I need to move fast. I look to the left and right, around the big space in the cockpit front of me, around structure and glass, past buttons and gauges and switches.

I slam my right palm onto the big shiny button-like joystick, vaulting me into the air. A slight toggle forward and I have a decent angle. I land to the right of where I was, on the other side of the mountain and behind my enemy. I push the accelerator forward with my left hand, twisting my wrist as I hit the ground moving as fast as possible. My gun is still chiming, letting me know that it hasn’t hit an acceptable level yet for use.

I don’t care. I have muscles. Well, metal muscles. My big orange mech is powerful.

I slam forward into the mech in front of me, using all of my physical might. The ground shakes, the sound booms in my ears, and I feel like I’m about to fall out. At that moment my gun becomes available. I reach over and fire.

It all happens fast.

I miss I miss wide right. With my machine gun and my rocket. I’ve been hit instead. I fell for trap and was surrounded, and am now just a casualty.

Damn, but it was good. It was real. And it was all in VR.

Vox Machinae, the upcoming game from Space Bullet Dynamics Corporation, is built ground up for VR. Sure, it’ll play without the technology, but why would you? This experience is more than a game, it’s an accurate simulation of what I’d imagine piloting a mech will be. My demo at the Oculus Game Days at PAX East makes sure of it. Though I’m physically seated in an office chair in the middle of a work space in downtown Boston, I feel like I’m actually in a steel cage with mechanical arms and legs. There’s depth all around me, from the far-reaching desert beyond the glass windows, to the beams supporting the vehicle’s greenhouse, to the lights and buttons and controls strategically placed in front of me. I look down, and my hands are there. My legs are there. 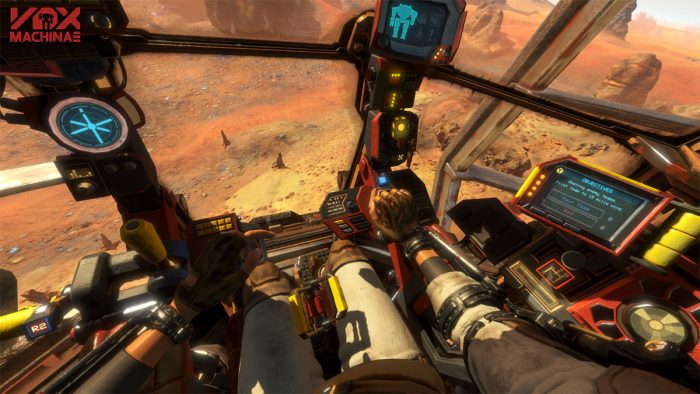 The premise behind the game doesn’t seem to be the PvP battles that I engage in against other attendees, or the hard labor I need to do to help society, but to learn the basics of manipulating this massive beast and utilizing that knowledge in different ways. I need to learn where all of the controls are around this cockpit, and how to understand my mech’s size and space in relation to the environment. My left hand accelerates and slows down the mech via a thruster, or adjusts and turns position with a joystick, while my right hand falls on a giant button that enables boosting in air. There are also switches and levers for guns and rockets and more, though the demo only shows a defined cross-section of everything that the full game will offer. The Oculus controllers are fantastic for mimicking actual grip and motion of my hands. I fumble around (a lot) until I get the hang of it, eventually learning via muscle memory where the controls are and becoming what I like to refer to as a “show floor pro.”

Added to the controls are how the Rift’s in-goggle visuals manage to stay crisp and clean. It’s not reality-level of quality, but the HD holds up and I don’t get nauseous at all. Thanks to the placement of objects in my foreground and background, I have places to focus my view. I can turn my head as quick as I want, but if there’s something in front of me and off in the distance, I feel like I’m not out of place. 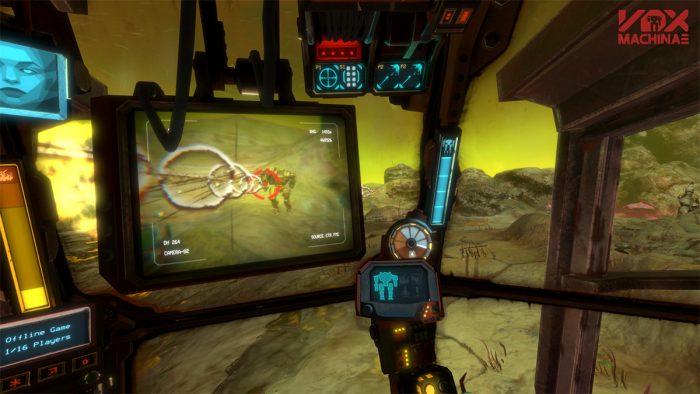 I’m smitten. I’ve tried other VR mech games and they all leave me ready to hurl, mostly because the space feels cramped and inaccurate and too futuristic to be believable and physically relatable. Not here, though. I can understand the physical objects and metallic frame that I’m stuck in because I see construction vehicles on my daily commute anyways. This is near term stuff my brain understands. This is real. This is right.

Vox Machinae has some great opportunities for experiences for its players. More than any other mech game, it nails the feel just right without throwing too much at us to freak out our bodies. Now I know what Sigourney Weaver felt like, minus the Xenomorphs.

Expect it later this year.